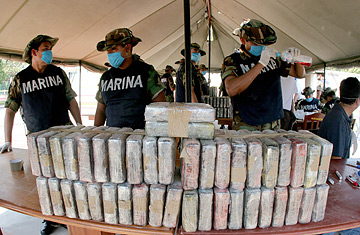 Your November 7 article, “U.S. marijuana vote may have snowball effect in Latin America,” indicates that the newly enacted marijuana legislations in Colorado and the State of Washington may have had an adverse effect on the profits of Mexican drug cartels. Although narcotics are their main source of income, your article fails to recognize that cartels no longer restrict themselves to drug trafficking for profit.

Due to the incubation effect, Drug Trafficking Organizations (DTOs) are expanding into other illegal activities in order to maximize their profit base, such as human trafficking, oil theft, and extortion. Evidence for this is provided by the $6.6 billion USD black market industry known to exist for human trafficking in Latin America alone. Furthermore, it is also known that many organized crime groups in Mexico are bringing in millions, if not billions, of dollars through ancillary criminal activities that are independent of drug trafficking. 1

Even if the state marijuana legislation is as damaging to the cartels as your article convincingly suggests, an incentive to traffic “harder” drugs, such as cocaine, heroin, and methamphetamine will still exist for the cartels. Currently, Mexico accounts for 7 percent of the world’s heroin production, which mostly responds to U.S. demand, 80 percent of all methamphetamines consumed in U.S. originates from Mexico, and 95 percent of U.S. – consumed cocaine crosses the U.S.-Mexican border.2 In short, your article overestimates how the newly enacted state legislation will affect the methods in which Latin American cartels finance their operations.

In response to the Seattle Times: U.S. marijuana vote may have snowball effect in Latin America