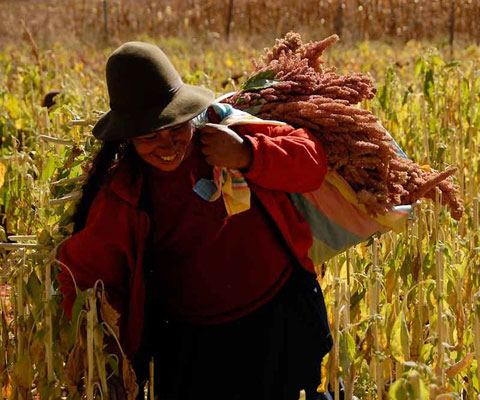 Quinoa is a high-protein, -calcium, and -iron chenopod[i]—consumed by the ancient Incas since 3,000 B.C.—that is a primary source of food and nutrition for Bolivians. The commodity has gained popularity and is invading foreign markets, particularly in the United States and Europe where it has generated debate on the subjects of economic growth and economic development in underdeveloped countries, particularly Bolivia. Economic growth is a country’s output, usually measured by Gross Domestic Product (GDP), whereas economic development is measured by indexes like the Human Development Index and includes progress in such areas as education and healthcare. Contrary to common understanding, research has demonstrated that economic development is not a necessary condition for economic growth to occur.

This pale-yellow food product grows on a three- to six-foot Chenopodium planti in the arid Bolivian and Peruvian altiplano regions. Those familiar with agriculture may wonder how this plant can grow in such unfavorable climates. In fact, the altiplano provides ideal conditions for quinoa to grow, as it thrives in high altitudes and cold climates. Furthermore, minerals from the nearby Uyuni salt flat and fertilizing dung from herds of llamas and sheep are important for production.[ii]      Over time, quinoa has slowly gained popularity around the Western Hemisphere. During the 1980s, small health shops displayed quinoa on their shelves, and after NASA revealed its significant nutritional values and “an exceptional balance of amino acids,” [iii] interest among consumers increased, generating a strong demand for its export. Production in Peru rose from 7,000 tons a year during the 80s to 42,500 tons last year.[iv] In Bolivia, quinoa exports reached 15,557 tons in 2010 compared to 14,521 tons in 2009, an increase of 7.13 percent.[v] Such demand has changed the lives of quinoa producers in Peru and Bolivia’s highlands by allowing them to invest in community development.

Ernesto Choquetopa, a Bolivian quinoa farmer, claims that before international quinoa consumption peaked, people from his rural community spent their entire lives farming and herding sheep and llamas. Now, with the global demand for quinoa, Choquetopa foresees a better future for the younger generation within his community, including his daughter, who is now able to attend medical school with the accumulated profit from quinoa.ii The demand has increased economic growth in producing communities usually characterized by extreme poverty, thereby encouraging economic development, as they can now invest in education, healthcare, and their overall quality of life. Moreover, it has given these communities hope and aspirations for a brighter future.

However, along with the increased demand for quinoa, prices have risen, creating problems for poor Bolivian consumers. By March of 2011, a 1 kilogram bag of quinoa cost five times more than its rice equivalent.[vi] The price of the commodity has thus put it beyond the reach of impoverished growers and producers. Micaela Huanca, a street vendor in El Alto, Bolivia, has to stop eating quinoa because it was no longer affordable. “I look at it in the markets and walk away,” Huanca said.iii

The Bolivian Ministry of Agriculture reported in 2011, “As prices rose, national quinoa consumption fell by 35 percent over a time frame of five years.”v Many have argued that this problem hinders the country’s economic development, particularly with health issues such as fighting malnutrition. Adam Sherwin reported in The Independent that high quinoa prices will force the population to consume other less-expensive foods such as rice and noodles, depriving them of the nutritional benefits quinoa possesses.vi Sherwin predicted that children would suffer the most from nutritional deprivation in the quinoa-growing region of Bolivia where many are already undernourished.vi

Even though this may be the case, Sherwin and others who are likeminded may be confusing correlation with causality. These arguments fail to acknowledge that there may be other causes for the decrease in quinoa consumption and increase in its price. For example, in 2011, Bolivian Vice Minister of Rural Development and Agriculture Víctor Hugo Vásquez argued that the population’s food preferences were changing, resulting in quinoa becoming a substitute commodity in people’s diets rather than a primary one.iii Moreover, the increase in the price of quinoa may not necessarily be caused by greater demand. Data from global statistics company Trading Economics suggest that Bolivia’s inflation rate throughout 2011 reached an all-time high of about 11 percent, suggesting an increase “in prices measured against a standard level of purchasing power.”[vii] As the inflation rate in Bolivia has increased, basic salaries have done the same. On May 22, Evo Morales’ administration announced an 8 percent minimum wage increase.[viii] The same data from Trading Economics showed that the country’s inflation rate at the beginning of 2012 decreased, suggesting the possibility that the price of commodities, such as quinoa, might decrease. Recent reports have predicted that quinoa production in 2012 would decrease by 50 percent due to freezing weather and harsh droughts.v As speculators stock up their quinoa reserves, the decrease in supply could certainly drive the current quinoa prices up. A decrease in consumption of quinoa may not be necessarily caused by an increase in production of the commodity, as other factors possibly influenced the market price for quinoa rather than solely increased demand.

Quinoa production should be encouraged, and Morales’ decision to facilitate a $10 million loan for farmers to grow more quinoa is a step in the right direction.vi Several quinoa-growing communities have benefited from increased production, and this is a momentum Bolivia, one of the poorest countries in Latin America, cannot afford to lose. With respect to encouraging quinoa consumption in the country, an extensive marketing campaign in Bolivia could inform parents about quinoa’s nutritional benefits. In addition, the Bolivian government’s decision to include quinoa in school lunches and the meals of the armed forces should be extremely beneficial in preventing malnutrition.iii

In response to growing quinoa prices and increasing malnutrition, the Bolivian government should partner with the United Nations and the World Bank to subsidize quinoa, in a way similar to the fuel subsidies program currently established in the country. Such a strategy would promote food security and encourage child nutrition. As Emma Banks from the Andean Information Network observed, “Quinoa farmers, government entities, and funding organizations must work collaboratively to insure that quinoa continues to benefit both producers and consumers in Bolivia.”[ix] The process could be long and difficult, but if successful, it could be one in which economic growth and economic development will come together for the benefit of the neediest people in Bolivia.