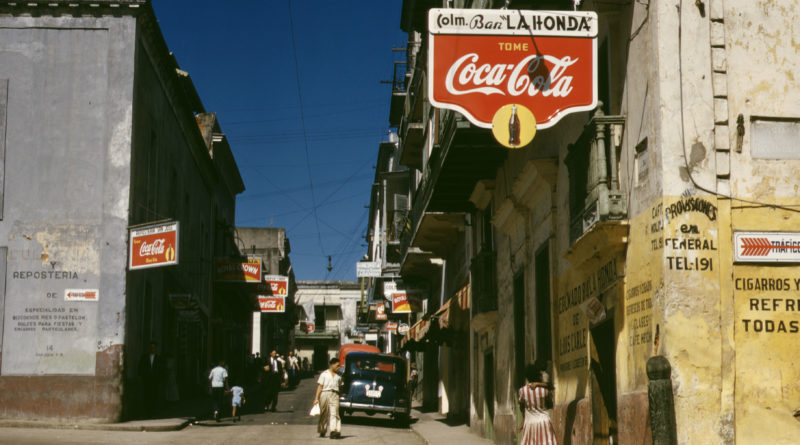 By: Emma Scully, Research Associate at the Council on Hemispheric Affairs

A report by former IMF economist Anne Krueger sponsored by the Government Development Bank of Puerto Rico offered a neoliberal analysis of the situation. To Krueger, Puerto Rico’s problems stem from the commonwealth’s too high minimum wage and overly generous welfare benefits.[1] A somewhat less reticent report sponsored by a group of hedge fund managers, who control a significant chunk of Puerto Rican debt, recommended outright austerity measures such as making sharp cuts to education and health care.[2]

However, these neoliberal prescriptions are far from offering a viable solution to Puerto Rico’s current troubles, which actually grow out of more complex, long-term causes, especially the island’s lack of autonomy in constructing its own economic policies. Puerto Rico’s relationship with the United States continues to be one of colonial-style dependency, serving to assure the overwhelming influence of powerful U.S. economic interests. The twentieth-century colonial policies, which allowed corporations to extract wealth from the island through foreign ownership of land and other productive property, have helped pave the way for a new chapter in the history of colonialism, characterized by exploitative debt obligations which largely benefit Wall Street.

A Colonial History: The Role of U.S. Capital

Puerto Rico became a North American colonial experiment when the Spanish-American War ended the island’s eight days of independence in July 1898. Since then, Puerto Rico has been steadily transformed into a reserve for U.S. capital. The process got a boost in 1899 when Hurricane San Ciriaco destroyed the island’s farmlands at a time when coffee was the principle export. U.S. banks swooped in and began to loan money to impacted coffee farmers, but, in lieu of any usury laws, extortionate interest rates led to mass defaults and farm foreclosures.[3] As the coffee sector fell into steep decline, sugar, a capital-intensive crop, became the dominant export by 1901, transforming Puerto Rico into a one-crop economy selling almost exclusively to the United States. By 1930, 41 out of 146 sugar mills produced 97 percent of the output, and 11 of the 41 were owned by four U.S. corporations which held over half of Puerto Rico’s arable land. Between 1927 and 1928, these four companies produced over 51 percent of the island’s sugar, with the United States dominating the industry and, in turn, the majority of the island’s wealth.[4]

Modern U.S. capital has taken several steps to ensure its domination of the territory’s wealth. The infamous Jones Act of 1920 still requires that all goods shipped between U.S. ports be carried on U.S. ships. Since the mainland is the island’s primary import and export partner, the Jones Act ensures that the domestic U.S. shipping industry remains protected from foreign competition and obtains enormous profits through this trade partnership.[5] Moreover, Puerto Rico’s notorious tax policies, including the Revenue Act of 1921, have turned the island into a corporate haven. In 1976, the creation of IRS Section 936 tax code enhanced the tax breaks that U.S. corporations enjoyed.[6] To promote investment, the law allowed U.S. companies to operate in Puerto Rico without paying corporate taxes at all, attracting especially pharmaceutical companies.

Initially, the 1976 provision was successful in making the commonwealth a hub for U.S. investment and pharmaceutical manufacturing.[7] However, in 2006 the tax break expired, setting off a recession that has helped fuel the current debt crisis. Companies deserted the island in droves, causing employment to fall 10 percentage points between 2006 and 2010, and an emigrating labor force drained the island’s tax base.[8]

As the Center for the New Economy points out, in Puerto Rico today “both production and consumption are dominated by the foreign sector,” and, therefore, “most of the income derived from the manufacturing and sale of exports accrues to and is repatriated by absentee owners, with little impact on the local economy.”[9] In addition, Jacobin Magazine notes that, “a substantial amount of wealth created in the island is extracted and not reinvested,” and about one-third of the island’s GNP is “repatriated back to the U.S.”[10] Meanwhile, Puerto Rico has turned to regressive imposts to gather revenue, with its sales tax two percentage points higher than that in Tennessee, the state with the next highest rate. This is a particularly harsh impost on the poor, given that the island’s GNP is less than half that of Mississippi, the mainland’s poorest state.[11]

A Neo-Colonial Present: The Role of U.S. Vultures

Due to the tax breaks on U.S. subsidiaries in contrast to the island’s high domestic corporate tax rates, Puerto Rico never had the opportunity to develop its internal private sector. As a result, when Section 936 expired, the government became the island’s largest employer but found itself in desperate need of investment to fund its projects.[12]

The solution came in 2012 in the form of two laws passed under the conservative administration of Governor Luis Fortuño, which continue to be implemented during the present administration of the more moderate Governor García Padilla. The laws provide new tax incentives to wealthy investors. [13] One, the Export Services Act, offers hedge funds a low 4 percent tax rate, and the other, the Individual Investors Act, provides investors 100 percent tax exemptions on all dividends, interest, and capital gains on the condition that the investor lived on the island for half a year.[14]

The two new tax breaks immediately drew in hordes of wealthy investors, enticed by the chance to buy up triple-tax exempt bonds from the public sector. Government bonds initially drew in mutual funds, which rely more on the economy’s performance, but for the past year they have been traded in secondary markets at lower levels, attracting hedge and vulture funds with no authentic interest in the island’s economic development.[15] Vulture funds, the speculative, more extreme subcategory of hedge funds, are particularly drawn to countries that are predicted to be facing economic crises and possible default. These investors buy high-risk distressed bonds for pennies on the dollar, only to later demand full repayment of the debt, walking away with billions in winnings. One such predator is DoubleLine Capital’s Jeffrey Gundlach, who profited off of the housing crisis in 2008 by buying distressed municipal bonds as the U.S. economy fell into recession. Gundlach, comparing the crisis on the mainland to the one in Puerto Rico, encouraged investors to begin buying the territory’s bonds in May when they fell to about 78 cents on the dollar, according to Bloomberg Business.[16]

CNN Money reports that hedge funds currently hold about $15 billion USD of Puerto Rico’s $72 billion USD debt, while the Puerto Rico-based Centro del Periodismo Investigativo (Center for Investigative Journalism; CPI) estimates that hedge and vulture funds together may hold up to 50 percent of the debt. One can be certain that these investors will keep close watch over any payment plan or debt restructuring in order to guarantee themselves a substantial profit.[17] Indeed, hedge and vulture funds have already begun lobbying against any measure that would enhance the Puerto Rican government’s autonomy to seek a measured plan for handling its growing debt.

Unable to declare Chapter 9 bankruptcy due to the island’s territorial status, García Padilla enacted a debt-restructuring law called the Puerto Rico Public Corporations Debt Enforcement and Recovery Act. The law resembled bankruptcy, as it sought some level of protection from bondholders; it claimed to be a “solution to ensure that vital public services such as the delivery of electricity, gas and clean water are not interrupted in the short-term” and proposed negotiations between the public corporations and their creditors.[18] However, a group of investors, who at the time held about $2 billion USD of the Puerto Rico Electric Power Authority’s debt, sued the commonwealth in federal court, claiming that the law would interfere with their contractual rights. In February, the court struck the recovery act down as unconstitutional.[19]

A similar situation began almost a decade ago in the case of vulture funds in Argentina, when the South American nation defaulted twice on its massive debt. When President Cristina Fernández de Kirchner’s administration defaulted again in 2012, a group of vulture funds led by billionaire investor Paul Singer sued the Argentinian government in New York’s South District Court, refusing to accept the debt restructuring. One of the principle hedge funds involved in the lawsuit, Aurelius Capital, also currently holds a portion of Puerto Rico’s debt, according to a report by CPI.[20] The court ruled in favor of the vultures, and the Argentinian economy remains deeply troubled as the government is forced to make 100 percent repayments for bonds that were bought at a fraction of the price.[21] While the U.S. government argued in favor of Argentina, the Obama Administration refrained from taking any concrete action in attempting to relieve the crisis, even though, as The Guardian noted, Obama could have adjourned Singer’s lawsuit simply by telling the district court that it “interferes with the president’s sole authority to conduct foreign policy.”[22]

Perhaps Obama’s inaction was in part due to the immense lobbying power of hedge fund managers like Singer, one of the most influential contributors to Republican candidates.[23] There are similar lobbyists on the Democratic side, such as Robert Raben, former Assistant Attorney General under President Clinton and the executive director of a group called the American Task Force Argentina (AFTA), which represents the vulture funds suing Argentina. Raben’s influential lobbying firm has received over $2 million USD from AFTA, and the latter “has spent nearly $4 million lobbying the White House, Treasury Department and U.S. Congress.”[24] These relationships reveal an unsettling truth: The forces of big capital often override a U.S. policymaker’s principles of sovereign rights and fair diplomacy. A similar relationship between policy and capital has driven the crisis in Puerto Rico. As the CPI report notes, the “hedge and vulture fund representatives visit the offices of legislators at the Capitol constantly.”[25]

Puerto Rico’s confrontation with vulture funds may not reach the same impasse as in Argentina. Indeed, Washington might even have some incentive to protect the territory from what Governor García Padilla has called a “death spiral,” as a complete collapse of the economy would render this colonial experiment a failure in the eyes of the Hemisphere. However, even if the commonwealth were granted Chapter 9 rights, Puerto Rico would remain bound by the chains of dependency. The crisis in Puerto Rico is a result of dubious policy decisions by the Puerto Rican government and Washington. United States’ colonial policies imposed on the island throughout the past century have turned Puerto Rico into a haven for cheap manufacturing. No amount of micromanagement of the ailing economy, by the IMF or by independent hedge fund managers, can cure Puerto Rico’s colonial crisis. Until Puerto Rico enjoys the right to shape its own economic policies, it will continue to suffer the predations of largely unregulated, U.S. capital. And the vultures will continue to circle.

By: Emma Scully, Research Associate at the Council on Hemispheric Affairs