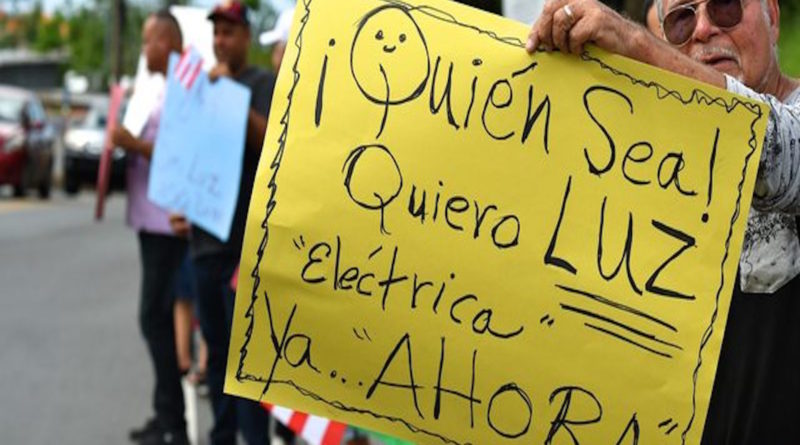 There is a famous saying in Spanish that “en Guerra avisada no muere gente,” which can be translated as “no soldier dies in a scheduled war.” Even though this is a recurring saying in Puerto Rico, apparently the lesson －if you are aware of the dangers around you, you are less likely to suffer from them －was never taught to the Puerto Rican and U.S. Federal governments. For years, the authorities have been aware of the dire condition of the islands infrastructure, especially of its decaying energy system. What better admonition than a complete blackout produced by a ‘system failure’ in one of the central generators in September 2016[i]. However, for more than a decade the government avoided investing in the maintenance and improvement of its infrastructure. This brought Puerto Rico to meet its Waterloo with hurricane Maria, a storm with winds surpassing 155 mph that left behind unparalleled damages exceeding the $95 billion.

Four months have passed since hurricane Maria devastated Puerto Rico, leaving millions without power, communication, clean water, and in a state of despair. As of January 2018, more than 30 percent of the population are still without power, forcing thousands of businesses to shut down and leaving over 30,000 people without jobs[ii]. The lack of primary resources and commodities has driven over a quarter of a million people out of the island, where it is predicted that by 2019 there will be less than 3 million people living in Puerto Rico[iii].

However, the primary victims of this devastation are those living in rural areas, where the help and response of the state have been extremely slow. While the initial efforts were primarily invested in the metropolitan area, where the business and wealthy are concentrated, the destruction left most of these rural communities unable to communicate with the government for several weeks. If it were not for NGOs, churches, and community groups, most of these people would not have received any aid. Their endless frustration has motivated them to protest the treatment by the state and elevated their extreme need for their power system to be reestablished by the government[iv].

The primary cause of the current public outrage is the inefficient response of both the island and federal governments in the immediate days after the hurricane. Disorganization and miscommunication characterized the reaction throughout the government agencies since none of the emergency procedures were put in action prior to the natural disaster. Experts argue that these emergency procedures determine what steps are necessary and who is in charge before, during and after a hurricane hits the island[v]. This lack of coordination caused a lag in the island’s government response since it was expecting the Federal Emergency Management Agency (FEMA) to be their first responder. However, the agency argues that this is precisely the problem that has delayed the recovery since their role is not as first responders but one of assistance to the local authorities.

The lack of preparation led to disorganization in the access and circulation of food, water, fuel, and the restoration of utilities across the island. This occurred to such an extent that up to this day the government is still uncertain of how many people died in and from the consequences of Maria. After the hurricane, the official count of deaths was 64[vi]. After several news outlets questioned the report, The New York Times reported that the actual number was around 1,052 and rising. The government had not taken into account all the related deaths due to the failure of essential utilities such as clean water and, especially, the battered power system. Local organizations, such as Centro de Periodismo Investigativo (Center for Investigative Journalism, CPI), are organizing surveys in order to determine which deaths are related to the storm and have not yet been included in the final report[vii].

Also, the unwillingness of the government officials to accurately disclose its finances has moved the Federal government to withhold a $5 billion loan for relief approved by Congress. In the immediate days after the hurricane, the island’s government asked for monetary assistance from the federal government to address the disaster. Three months after the emergency relief was approved, the Puerto Rican government, in December, disclosed over $1.5 billion it has in cash and the oversight board found a total $7 billion in undisclosed money[viii]. This discovery led FEMA to withhold a $5 billion relief loan until the island’s finances drop below their policy standards, which have not been fully unveiled. Although Puerto Rico has argued that the money is already destined for other expenses, the FEMA decision is forcing them to use these funds to ensure the continuing operation of their utilities.

Even though privatization and austerity policies has been in the current government’s agenda since the start of their administration, the most recent government’s proposition to tackle the power system deficiencies is to privatize the power company, known as PREPA[ix]. In a demagogic way, the governor has utilized the public anger and frustration towards PREPA as a legitimating vehicle for its privatization scheme. Once known as the government’s crown jewel, PREPA now faces its most significant threat, since over 87 percent of the public approves this measure[x]. The argument is that since PREPA has become an old and obsolete enterprise, a privatized energy scheme consisting of “a mix between selling assets and offering concession to private companies to run operations over the following 18 months” will solve the island’s energy problems [xi]. The expectation is for more efficiency, lower cost, and public emancipation from a decaying infrastructure.

However, this policy favoring PREPA’s privatization ignores the lessons learned by the privatization of the water and sewer company, which had similar expectations only to have the government repurchase the company after facing problems with quality control, costs, and range of services[xii]. Likewise, the negative effects of the privatization of several highways, the health system, and airport, which led to reduced services, less state revenue, and more cost to the consumers.

Furthermore, this policy has not taken into consideration that FEMA only assists public and private corporations that are nonprofit. Therefore, the question that arises is, which private organization will cover the costs of rebuilding the infrastructure after a hurricane, without passing the price to its customers? For example, Florida Power & Light Co. was planning on surcharging between $4.00 and $5.50 on customers monthly bills, to cover the $1.3 billion Irma-related costs. After Congress rewrote the tax code, the company decided to utilize its tax saving rather than as a surcharge.

Additionally, it does not consider that a private company could raise prices without the necessity of justifying it to its customers, which will directly impact society’s most vulnerable communities, like those on welfare and the elderly. This would go against the sole purpose of the government’s consolidation of the energy production during the 1970s, of controlling rates and expanding services without the constraints of the market-profit mentality. Moreover, the governor has promised the public that the revenue from the sale will be used to fund the public pension system. However, that is impossible since the money would go to pay the $9 billion the corporation has in debt, for which it already has declared bankruptcy.

Although PREPA and its union have expressed opposition to such steps, as arguing that the corporation was intentionally set to fail precisely so it could be privatized, the recent history presents a very compelling case against them. Last November, its director was forced out of his position for not contacting his counterparts in the mainland immediately after the hurricane, and by rushing a $300 million contract to a small company in Montana, called Whitefish. Whitefish turned out to be a company with only two full-time employees and without the resources, experience, and personnel to complete the job of restoring the power lines[xiii]. The company historically has also been accused of political patronage and inefficiency. Therefore, the slow response to reestablishing services added to PREPA’s recent scandals has caused a decay in its political capital, making it easier for the government to justify its privatization.

The economic crisis that Puerto Rico is currently facing is an exacerbating factor to this dire situation. Years of irresponsible economic dependence on bond emissions produced a $73 billion deficit, with 50 percent of the affected population are living under the poverty line, and with an unemployment rate of 14 percent[xiv]. The unpayable nature of the public debt forced the government to declare bankruptcy under title III of PROMESA, which is the Congressional response to the crisis by establishing a fiscal oversight board[xv]. The primary role of this board is to oversee the finances of the island and make sure that all measures are taken, including austerity policies and privatization, in order to pay back the bondholders. In other words, this board is the epitome of the colonial status and lack of democracy in which Puerto Ricans are living today.

Fortunately, in the four months that have passed since hurricane Maria, several services affected by the storm are functioning at full capacity. For example, 97.5 percent of the communication systems are running, all major hospitals are providing services, and 88 percent of gas stations are fully operating. However, there is still a long way towards a full restoration, requiring a complete concentration of efforts and mobilizing resources of the government to rebuild the country before the new hurricane season begins, which is only five months away.