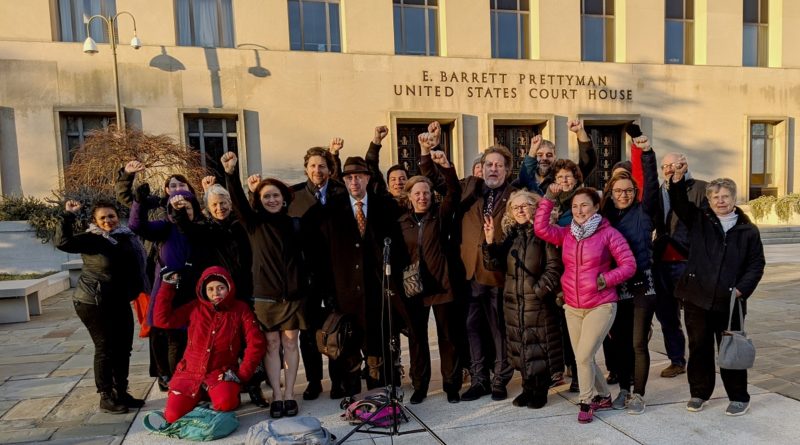 Federal charges against the four protectors of the Venezuelan Embassy, who defended the building in Washington DC against violent opposition crowds for several weeks between April 10 and May 16 of 2019, were completely dropped in a case that was brought directly by prosecutors of the Trump administration.

After several months of proceedings that produced a mistrial in February 2020, the four activists expressed in a public statement that “Today’s sentence marks yet another victory in the effort to protect the Venezuelan Embassy. The Embassy Protection Collective broke through the blockade and got supplies to the people inside; the people inside prevented the coup supporters from staying in the embassy; the embassy was not turned over to Guaidó—it remains empty today—and now the federal charges have been dropped.”

The federal charges the US Government prosecutors were seeking, “interfering with certain protective functions,” were dropped entirely. The defenders were found guilty of a minor charge, “incommoding,” which corresponds to “causing a disturbance,” and falls under local DC jurisdiction. These charges resulted in a penalty of six months’ probation and a $500 fine. Under the federal charges, the defenders were risking one year in jail and up to $100,000 in fines.

Last February, Trump administration prosecutors were unable to convince the jury that retired nurse practitioner David Paul, lawyer Kevin Zeese, pediatrician Margaret Flowers and academic Dr. Adrienne Pine, broke any law during their stay at the Venezuelan Embassy while protecting it by request of the legitimate Venezuelan government of Nicolás Maduro.

As COHA previously reported after the mistrial was declared, federal judge Beryl Howell had imposed numerous restrictions on the defense attorneys. Today, June 3, the judge formalized the plea that reduced the charges.

Lawyer Kevin Zeese said “We are going to increase our efforts at building solidarity in the US and Venezuela to stop US regime change. With this prosecution behind us we will work to end US sanctions, and threats of military force”. He added, “We went into the embassy to prevent its takeover as part of the US coup but our goal has always been to stand with the people of Venezuela and for their independence and sovereignty.”

Margaret Flowers stated: “I want to express my solidarity with the Venezuelan people and all people who believe in protecting human rights and resisting the US illegal exploitation and aggression. I know that together we will build a world based on cooperation, peace and respect for law.”

In their public statement, the protectors said that they “share a vision with Venezuelans and many people around the world of a future based on peace between countries, international cooperation and respect for international law”. They also “hope their government will end its sanctions, blockade and aggression toward Venezuela and all countries being targeted and join in the spirit of international cooperation that prevails in this time of a global pandemic, recession and climate crisis.”

A public webinar will be organized soon to empower the solidarity movement in solidarity with the Venezuelan people against the illegal US sanctions. More information can be found here.