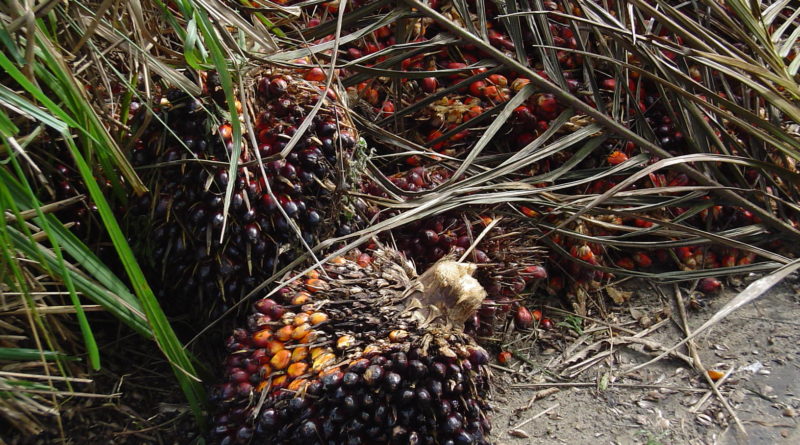 Last August, the sixth Roundtable on Sustainable Palm Oil (RSPO) Latin American conference was held in Guatemala. Palm oil production is expanding in the region due to increased world demand. Its high versatility and productivity is bringing many Latin American producers to farm this crop. However, the harmful impacts of the aggressive plantation expansion on local communities are often under-acknowledged. Negative effects include soil depletion, water pollution, and deforestation. In order to encourage environmental protection the RSPO works to advance the production of sustainable palm oil by setting the criteria of evaluation and certification for sustainable products.

Palm oil, a vegetable oil derived from the fruit of palm trees, is a typical crop of rainy tropical lowlands. The trees require deep soil, stable high temperatures, and continuous moisture throughout the year. Palm oil originates from West Africa but it has since spread to South-East Asia and Latin America. Highly versatile it can be use to manufacture a variety of products, from cooking oil and biofuel to ice cream, ready-to-eat meals, liquid detergents, soaps, polishes, and lipsticks. In addition, palm oil has a competitive advantage over its substitutes. The annual yield is about 3.3 tons per hectare, an amount far greater than for other vegetable oils.[i] Furthermore, palm oil is cultivated in regions with low labor costs. Global production has boosted considerably over the years and is expected to keep increasing. Latin America has played a significant role in this boom. According to the estimate of the United States Department of Agriculture, Colombia is the fourth largest world producer of palm oil, with 1,280 million tons per year, Ecuador sixth, Honduras seventh and Guatemala places in the tenth positioning.[ii]

Although palm oil is a relatively new crop in Latin America, where farmers traditionally cultivated other products such as banana, coffee, and cocoa, it has become an increasingly lucrative alternative for many peasants. However, the cultivation and processing of palm oil on a massive scale leads to a number of environmental dangers.[iii] First, to plant the seedlings, land is cleared and prepared for the plantations, a process which includes removing wild vegetation and previously cultivated crops. This destroys tropical forests. Such forests are not only the planet’s lungs, but they contain a high grade of endemism and biological diversity, a doubly essential resource to preserve. In addition, burning is a common method to clear land for the cultivation that generates air pollution releasing smoke and carbon dioxide in the atmosphere.[iv] In order to prevent deforestation, protected areas have been identified but controls are difficult to enforce. Second, the use of pesticide on plantations and of chemical products when processing the fruit causes widespread river contamination, water pollution, and fish extermination. The chemical products released in the atmosphere and in the water, as well as the burning of forests, contribute to the escalation of climate change. Third, palm oil production has supposedly rendered previously fertile land incapable of growing new crops due to the invasive root structure of the monocrop.

On top of environmental dangers, palm oil production opens the door to human rights abuses. As plantations that are mainly controlled by big landowners expand, indigenous farmers are losing control of their land to the palm oil industry and entire communities are being displaced. In Guatemala, indigenous communities, whose right to territory, food, and clean water have been negatively impacted by palm oil companies, have brought their case to the Inter-American Commission on Human Rights. The Guatemalan government and other agencies, such as the Inter-American Development Bank and the World Bank, have promoted palm oil cultivation as a mean to foster economic and social development in the country. This monocultural crop was recently extended into areas inhabited by indigenous populations without their consultation or assessment of environmental impacts. As a consequence, the Pasión River has been polluted with a pesticide called Malathion, which is considered harmful to human health by the World Health Organisation. It is known to cause illnesses, cancers, miscarriages, and involuntary sterilizations. In addition, the absence of proper legislation on indigenous land parcels have resulted in an unfair toxic damage to lands by the big palm oil companies. The economic model of land exploitation enacted by the palm oil industry violates not only the preservation of nature, rivers, flora, and fauna, but, above all, fundamental human rights, including the right to life for indigenous people protected by the American Convention on Human Rights. [v]

Greater concern is growing in the region about the damages produced by the palm oil industry. In April 2015, a state of emergency was declared after millions of fish and animals were found asphyxiated by pesticides that leaked in the Pasión River in Guatemala. According to Guatemala’s National Council for Protected Areas, “approximately twenty-three species of fish and twenty bird, mammal, and reptile species” were impacted.[vi] The pollution also affected over twenty thousand people from seventeen communities living along the river and relying on it for subsistence and revenue. Members of the population have begun to show “symptoms of skin welts, fevers, headaches, nausea and diarrhea”.[vii] The United Nations even issued a condemnation of this ecological disaster that had a great impact on local families. Many environmental activists denounced the deterioration of the river due to the presence of the palm oil industry. Among them, the indigenous professor and human rights defender Rigoberto Lima Choc was the first person to document the socio-environmental damage caused by this production. He was murdered just a day after a court upheld charges he filed denouncing massive pollution.[viii] In January 2016, a ground-breaking decision was given by a special Guatemalan court dealing with environmental crimes. The palm oil corporation Reforestadora de Palma de Petén S.A. (REPSA) was convicted for “ecocide”—“the extensive damage, destruction or loss of ecosystems to the extent that peaceful enjoyment by the inhabitants of the affected territory is severely diminished”[ix]—in relation to its contamination of the Pasión River.[x] But the Pasión River case is just the most eye-catching episode. Pollution and depletion of natural resources due to palm oil production is a bourgeoning trend.

In Latin America, palm oil production has the potential to be an important source of revenue for people living in poverty. Palm oil cultivation can aid social and economic development, but it has to come in a way that combines conservation of natural resources with economic production. Farming and processing practices should be sustainable, enabling current generations to make ends meet without compromising the ability of future generations to satisfy their own needs. This means preventing environmental degradation. To this end, the RSPO promotes a palm oil production plan comprised of legal, economically viable, environmentally appropriate, and socially beneficial management.[xi] It encourages growers to adopt its principles and criteria in order to become suppliers of Certified Sustainable Palm Oil (CSPO). Among those principles, there are environmental responsibilities, including the conservation of natural resources and biodiversity, and responsible development of new plantings. Producers of CSPO should contribute to the protection of the environment, assessing potential effects on natural ecosystem while contributing to local communities’ development. Their plantation should be set on previously cleared or degraded land. According to CSPO requirements, in order to protect tropical forests, establishing new plantings that replace primary forests or areas of High Conservation Values (HCVs) is prohibited. HCVs are biological, ecological, social, or cultural values that are of critical importance.[xii] All natural habitats possess inherent conservation values, including the presence of rare or endemic species, provision of ecosystem services, sacred sites, or resources harvested by local residents. Strong progress has been made in increasing sustainable palm oil production. Today 11.37 million tons of CSPO is produced, accounting for 17 per cent of global palm oil.[xiii] In Latin America, big suppliers are being pressured by global companies demand for certified palm oil. In order to favour small farmers’ participation in the sustainable production, the RSPO set up a fund to support them to obtain the certification. This certification not only reduces the negative impact of their activities on ecosystems, while improving their wellbeing, but it helps smallholders to increase their yields and safeguard international markets.

There has been a rising global demand for CSPO. To boost consumers’ awareness, the World Wildlife Fund (WWF) has created a scorecard to assess which brands are performing better in being sustainable. It scored 137 companies on their use of certified sustainable palm oil, which is grown in ways to limit greenhouse gas emissions, preserve forests and fresh water, and protect wildlife. The results showed, for instance, that among the largest companies, Walmart, McDonald’s, Krispy Kreme Doughnuts, Colgate-Palm-olive, and Ferrero are leading the way back. On the contrary, Campbell’s, Costco, Dunkin’ brands, Tayto, and Brioche Pasquier are “not yet in the starting blocks” for sustainability. [xiv]

Indeed, CSPO is increasing its share in world production but a lot more has to be done. Palm oil cannot be easily replaced for its versatility and productivity. Palm oil production is an important means for rural populations living in poverty, looking to achieve economic and social development. Indigenous communities should be more involved in palm oil schemes. It is thus vital to guarantee the sustainable management of land, river, and forest resources while protecting the rights of workers, indigenous people, and all other social categories.

[v] Inter-American Commission on Human Rights. Human rights situation of Indigenous Peoples in the context of the activities of the palm oil industry in Guatemala. October 22, 2015. http://www.oas.org/es/cidh/audiencias/Hearings.aspx?Lang=en&Session=138&page=2