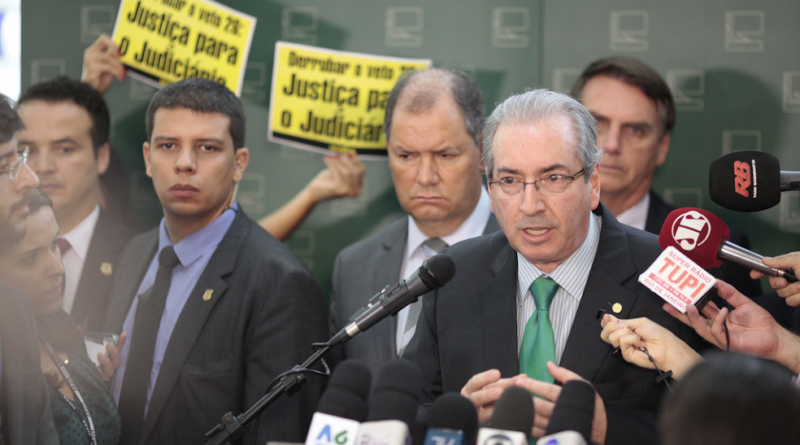 By Pedro Izquierdo and Sophie-Anne Baril, Research Associates at the Council on Hemispheric Affairs

On June 14, Brazil’s congressional ethics committee voted to remove Deputy Eduardo Cunha from his position as Lower House Speaker.1 This decision comes after a series of allegations accusing him of having unregulated overseas bank accounts and involvement in the Petrobras scandal. Although a majority of the lower house of Congress must assert this decision to remove him from his position, Cunha, one of the orchestrators of President Dilma Rousseff’s impeachment, still faces the possibility of arrest and prosecution by lower courts in multiple corruption cases against him.2

A Reuters source affirms that “Cunha is the only sitting Brazilian lawmaker to face trial in the massive bribery investigation focused on state oil company Petrobras [for] which he was indicted for receiving a $5 million bribe related to contracts.”3 Cunha’s involvement in the scandal signals a warning to other politicians. Despite his singular involvement as the only lawmaker to currently face such trial, if convicted, Eduardo Cunha vows to bring other officials down with him.4 In that case, Cunha would not be the only one entangled in this scandal. This alleged threat from Cunha could be alarming for those he is allied with— such as current Brazilian interim President Michel Temer.

For Temer, a plea bargain on behalf of Cunha may link more members of his government and ruling Brazilian Democratic Movement Party to corruption.5 Without a doubt, this would be troubling for Temer’s presidency. The possibility of Cunha’s expulsion is ironic, given that he instigated President Rousseff’s impeachment process. If finalized, Cunha’s departure is not expected to affect the outcome of President Rousseff’s impeachment trial in the Senate, where she may be convicted of allegedly violating budget laws, leading to her official removal from office.6 As suspended President Rousseff’s impeachment trial comes to an end, Eduardo Cunha’s corruption trial progresses forward to its next stages. While federal prosecutors continue investigating Cunha’s contribution to the Petrobras scheme, they have also ordered to freeze his assets.7

Currently, Eduardo Cunha is facing the possibility of removal from his position for lying to his colleagues regarding undeclared offshore accounts. If found guilty of having such accounts, he would not only lose his partial immunity and be stripped from his seat, but he could also face the possibility of arrest and prosecution from the lower courts, who further accuse him of accepting bribe money and money-laundering.

Although Cunha has denied any wrongdoing and denounced the accusations made against him, the committee has decided by 11 votes to 9 to expel him from the lower house, where if a majority of the chamber’s 513 representatives choose to uphold the decision, he would be expelled from Congress entirely.

Cunha is not the only one in his family accused of corruption—his wife, Claudia Cruz, was accused on June 9 for using stolen money from Petrobras for personal, luxurious spending. Similarly to her husband, Cruz denies this and all other accusations against her. Even though Cunha has been suspended from his post as Speaker, he continues to covertly direct legislative actions through his influence.

The public polls, conducted by Datafolha in April, confirmed that 77 percent of the population agrees with the decision to expel Cunha.8 According to Swiss authorities, Mr. Cunha has secret offshore accounts that are altogether worth $5 million USD. In turn, Brazilian prosecutors have traced these accounts directly to the Petrobras case. However, he states that his Swiss accounts were trust funds that he did not control.9 Swiss authorities have found that Cruz is controlling a Swiss bank account in the name of a Swiss company, which she and her lawyer used to cover more than $1 million USD in credit card expenses between 2008 and 2014. This same lawyer is also accused of obstructing corruption cases made against him by intimidating lawmakers. She has allegedly used deposited money from an offshore account to pay for expensive products like clothes, handbags, shoes, and their children’s education.10

Also, the judge of the Petrobras and Cunha’s cases, Sergio Moro, has allowed five days for the district attorney to decide a course of action against the couple’s daughter, Danielle Dytz, who has also benefited from her parents’ fraud, although she is not the owner of any of the aforementioned accounts. Investigators say that she has spent a huge amount of money from credit cards abroad. The district attorney plans to conduct further investigation to determine Dytz’s precise involvement in her family’s embezzlement.11

In the midst of one of Brazil’s worst political crisis in decades, Cunha is not the only official to have been accused of corruption and money-laundering. He is joined by many other Brazilian politicians and businessmen. However, the judicial process against Cunha was initiated five months ago, making it the lengthiest in the history of the Chamber of Deputies. Further complicating the process, Cunha is accused of obstructing the investigation as well as abusing his position as speaker as a means of intimidation. Until June 23, the process is ongoing to confirm or reject the decision of Cunha’s expulsion.12

By Pedro Izquierdo and Sophie-Anne Baril, Research Associates at the Council on Hemispheric Affairs