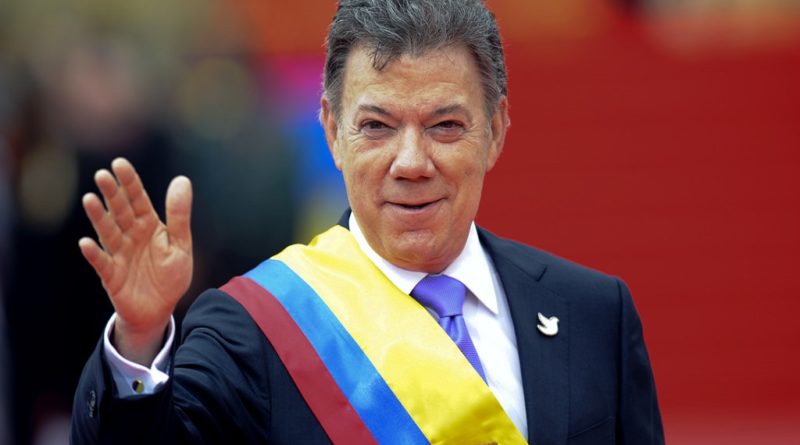 Colombia’s presidency is held by Bogota-native, Juan Manuel Santos. He is a member of the liberal-conservative Partido Social de Unidad Nacional (Social Party of National Unity). Santos’s seven years as the leader of the South American country has been riddled with successes, disappointments, turmoil, conflict, and the long and unstable road to peace. He won the Nobel Peace Prize in 2016, “for his resolute efforts to bring the country’s more than 50-year-long civil war to an end.”[i] This brought great prestige and honor to him and Colombia. However, despite being at the head of the administration that chartered and navigated, with great difficulty, historic negotiations and a peace deal with the oldest Marxist guerilla organization on the continent and the resulting Nobel honor, his popularity remains very low, holding just a 24 percent approval rating.[ii] This number is in stark contrast from his original approval rating of 60 percent, despite his re-election in 2014.[iii] So one must wonder, why the low approval rating? What is it about Santos, a president whose accomplishments look so remarkable on paper, that the Colombian people do not like?

If one were to solely hear that the Colombian president strategically and effectively brought about a peace deal to a decades old war with one of the most brutal and controlling guerilla groups in the country while winning a Nobel Peace prize, it would be understandable for one to assume Santos to be a great leader. However, it is necessary to understand the background and history of Santos’s rise to power and fame in order to contextualize current perceptions of him. He was born into a powerful family. His great uncle, Eduardo, was president in the early 20th century and his cousin was vice president in the Uribe administration (2002-2010).[iv] Santos’s father was an editor for one of Colombia’s most prominent newspapers, El Tiempo,[v] and Santos himself was able to go abroad for an extensive and most coveted education. He served as defense minister under former right-wing President Uribe, during which time the two were close allies. When he made his first bid for the presidency in 2010, Santos was endorsed by Uribe and won in a landslide victory, taking 69 percent of the votes.[vi] Due to the former president’s endorsement, many people believe that Santos’s presidency was handed to him and that he did not have to work very hard for it. Quite understandably, as a political leader and man born into wealth, he never had to experience the true effects that the FARC (Fuerzas Armadas Revolucionarias de Colombia) had on the majority of the Colombian people.

As defense minister, Santos still had his fierce critics and fans alike. Colombians, who held onto the belief that a militaristic response was needed to fight the FARC, approved of Santos’s military objectives and strong policies towards the guerilla group. However, those who were less radical in their beliefs thought that Santos was too forceful and offensive. When many voted for Santos, they did so with the hope that he would bring a different approach to dealing with the FARC as well as handling his presidential administration. Yet, despite his move to a more diplomatic approach as president, many Colombians have come to dislike his methods. Santos has been dedicated to ending the FARC’s reign of terror in Colombia and many argue whether he has accomplished this successfully during his term in office. Santos describes his own low popularity with the explanation:

“…making war is very easy and not popular. I was minister of defence and was very effective…Making peace means you sit down with your enemies and you start making transactions in order to achieve that peace…seeing the person who was militarily effective against them sitting down and making concessions, this is something that is not very popular or accepted.”[vii]

It is true that Santos’s negotiations and agreements with the FARC have been one reason for his people’s disapproval. Many believe that his concessions were much too lenient for this contentious group, such as allowing the FARC to avoid prison time.[viii]  Those right-wing Colombians see his approach as a threat to democracy while some left-wing citizens believe he is not delivering on the promises he made while campaigning. Resentment also emerged due to the condition that ex-FARC members would be recipients of a monthly government stipend that is “nearly equal to Colombia’s minimum wage for a two-year period after the accords,” as well as be eligible for a one-time payment of $2,500 USD to be used for economic pursuits, such as starting a business.[ix]

Other Colombians, including former President Uribe and his followers, remained highly skeptical that the FARC could possibly be reintegrated into society through the political process: how would it be possible that people who had committed atrocities, kidnapped and murdered men, women, and children, as well as increased the severity of the drug problem in Colombia could be given a role in government or a voice on such a public stage? These differences in opinion on how to approach the FARC leading up to the referendum were such a point of tension between Santos and Uribe that it led to a clear splitting of allegiances. Santos was seen as implementing an agenda with different policies from what Uribe had believed he would embody as president – namely, engaging in talks with the FARC rather than continuing with a militaristic approach.[x] As a result, Uribe strongly and publicly disagreed with both terms of the peace deal and with Santos’s management of the FARC’s demilitarization. Consequently, Uribe urged Colombians to vote ‘No’ to the peace deal in the referendum. The results, which were extremely close but ended up with a win for the “No” votes, clearly demonstrated that those who were against the deal were a larger force than the Santos administration and his supporters originally believed. Despite the referendum, the peace deal was revised and ratified by Congress several months later, thus creating more discontent among Colombians.

However, this is not the only reason for Santos’s low popularity rating. Many disapprove of his agenda overall; they believe his central focus on peace with the FARC has caused him to overlook the rest of the country’s issues, such as the limping economy and the impaired welfare of its people. Only 5 percent of Colombians believe that the FARC and ELN are the most important topics in the country, while 63 percent of Colombians believe unemployment, healthcare, and corruption should be the priority, with issues such as poverty and petty crime following closely behind.[xi] Therefore, many Colombians disagree with the direction that Santos is leading the country by deprioritizing these concerns.

Leaders will always have their fans as well as critics; this is inevitable for any political leader. Santos certainly has, against great odds, been a constructive president, and his consistency with the peace agreement is indeed commendable. He has not backed down despite knowing his popularity has flagged, and his actions have been rewarded with the Nobel Peace Prize. However, this is not to say that his actions have been entirely without error. The Colombian people’s displeasure and disapproval of their leader and government demonstrate that Santos has, in some way, disappointed his people. He has done his best to bring peace to his country but at what cost? This is a question that will remain unanswered until Colombia’s post-peace deal society develops further and its successes – or failures – are revealed in the future.

[vii] “President Santos of Colombia: you have to draw a line between peace and justice,” EuroNews, June 27, 2017, http://www.euronews.com/2017/06/27/president-santos-of-colombia-you-have-to-draw-a-line-between-peace-and-justice.