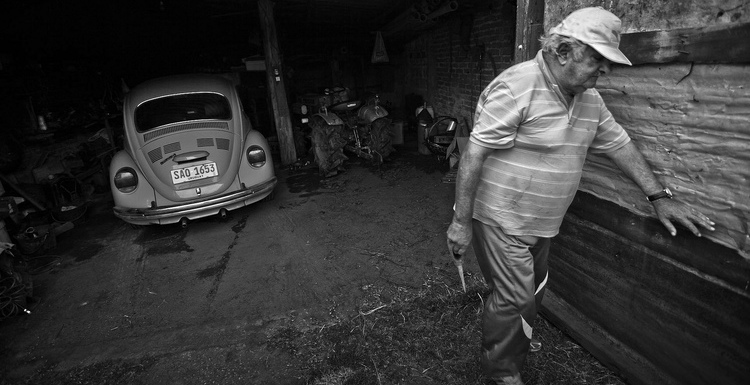 By: Carolina Jordan, Research Associate at the Council on Hemispheric Affairs

The first half of Jose Mujica’s public career began as a member of the country’s Tupamaros guerrilla in the 1960s. At the time, Uruguay’s deteriorating democratic government was allowing its citizens to be punished in relative silence at the hands of its military. Mujica’s guerrilla was seeking to overthrow the country’s government at the time by committing “Robin Hood”-like robberies in order to redistribute wealth and food to the poor. In turn the guerrilla were performing bombings, kidnappings and highly visible murders to sow terror.[1] Mujica managed to generate an aura of insurrection in order to create a revolutionary atmosphere in the country. The result led to a military dictatorship that lasted from 1973-1985.

Despite of spending this long prison term that changed his perspective on democracy, Mujica ultimately did not leave behind a desire to revolutionize Uruguayan politics. After leaving prison in 1985, he initiated his political career in 1994 by first getting himself elected to the Chamber of Deputies and then assuming a senior position in the department of agriculture.[2] In 2009, Mujica stood for the presidency and ended up winning on a center-left platform. His position as president enabled him to affect many changes in his country. However, this time he did not want to challenge democratic rule. Instead, he intended to strengthen Uruguay’s position as a democracy, something he had rejected in the past.[3] In a recent interview with The Economist, the Uruguayan leader affirmed his fidelity to the democratic creed and further explained that his choice to live in a simple country farmhouse and not a presidential mansion, marks a clear demonstration that he wants Uruguayans to identify themselves with his choices, and to actively exercise the idea of equality, which comes along with the values he now strongly upholds.[4] He has remarked that the world needs a revolution that could only be started with a change in way of thinking.[5]The change of his personal political view on democracy and his preference to encompass its ideals are yet again another reason to think of Mujica as a formidable politician with a dramatic change of vision.

The political trajectory of José Mujica from the start seemed to break from the status quo, and foreshadowed the uniqueness that characterizes his current tenure as president. First, he stood out as a guerrilla figure opposing a bourgeoisie democracy, and now as leader that has broken from the mold of a number of other leaders in the region. His recent groundbreaking reforms such as abortion, same sex marriage, and drug legalization, which often have been opposed throughout much of Latin America, have earned the Uruguayan president the title of “country of the year,” for being the most liberal and value-driven society in the region.[6] This categorization emphasizes the differences between Uruguay and other Latin American countries that have been far less progressive in recent years. Mujica’s latest success in raising Uruguay’s citizens’ standard of living is an indication that his progressive politics are reaping a number of positive dividends. A brief tabulation of the reforms targeted during his presidency provides one with a better understanding as to why these progressive reforms reflect Mujica’s innovative current goals, despite his controversial radical past.

In October 2012, after a long battle in congress, Uruguay became the second Spanish speaking country in Latin America to legalize abortion for all women. Senator Alfredo Solari in opposition to this move, stated, “Abortion is not a medical act,” that “protects and preserves a patient’s health.”[7] Thus, his position suggested that the law should be repealed. When the bill reached Mujica’s desk for a signature, few doubted that he would sign the law into effect.

Other regional countries had enacted legislation to address abortion, but their laws that remain highly restrictive and only indirectly affected women who are victims of rape or those whose health is at risk due to a pregnancy.[8] Abortion is a controversial topic for Latin American countries since the region continues to be devoted and predominantly Roman Catholic. Nonetheless, it is impossible to ignore a problem of this magnitude, when it continues to have the world’s highest abortion rates at 38 percent.[9]

Currently the law allows all women to have an abortion during the first twelve weeks of gestation, but in order to undergo the procedure they must meet with three experts (i.e. psychiatric, social worker, gynecologist) that will inform the patient about the risks associated with abortion and suggest alternatives, such as adoption.[10] After the meeting, a woman has 5 days as a “period of reflection” before proceeding with the abortion.[11] Although, the law appears heavily bureaucratic, it does not actually define when a woman can get an abortion. Instead, it outlines the necessary requirements in order to obtain one, which essentially separates Uruguay’s abortion law from the ones Peru and Argentina have enacted.

A year after ratifying the abortion measure, in August 2013, Uruguay once again dominated international headlines by legalizing same-sex marriage, again backed by President Mujica. The heavy opposition once again came from religious groups in the region, mainly from the Roman Catholic Church, which helps explain the lack of incentive and limited support some Latin American countries to address the same-sex marriage issue.

Uruguay’s new law allows same sex couples, nation-wide, to register for marriage. As a result, Uruguay has become the second Latin American country to legalize same-sex unions after Argentina.[12] Even though other nations in the region have enacted significant social reforms geared towards their LGBT communities, these reforms have been treated only as a regional-level matter, rather than nationally.[13] In an interview with the Brazilian news source O Globo, Mujica mentioned that same-sex marriage is not a modern day issue but rather “older than the world.”[14] His statement once again demonstrates the progressive thinking of the Uruguayan president, and once again highlights his marked difference from other political leaders in the region.

In December 2013, the most far-reaching measure addressing drug legalization, was witnessed when Uruguay’s congress passed a law legalizing marijuana and marking Uruguay the first country to regulate its production and trade.[15] The law also stipulates the following: consumers of marijuana over the age of 18 would be allowed to purchase a maximum of 1.4 ounces of the substance per month. Part of the process involves individuals to register on a database as well as purchasing the substance only from a government-regulated distributor. Growers are allowed to plant a maximum of six plants; production and sale are not allowed adjacent to the borders, while foreigners are not eligible for legal consumption of the drug.[16] The legislation appears to have an ingenious structure centered on government regulation. However, there is room for loopholes regarding law enforcement and consumers’ compliance, since its provisions could allow for black market operations and corruption to thrive.

The president’ strides to support this legislation rests on tackling security problems and disrupting the country’s illegal drug market. According to Mujica, Uruguay is a perfect place to experiment with this legislation due to its modest size.[17] His thinking truly reflects the instinct of his progressive initiative. Yet polls reflect that this reform remains highly unpopular among the 63% of Uruguayan citizens and various politicians, including Senator Solari who fears that the regulation will further deteriorate the poor’s living standards and their access to improved levels of education.[18] The bill’s implementation still remains under debate and faces the threat of being repealed as a by-product of this month’s general election.

President Mujica’s latest social reforms serve as a model for Latin America, but criticisms from domestic and international figures remain. It is essential to consider the importance of his reforms for Uruguay, as well as for the rest of Latin America. As a small country, Uruguay can emerge from these reforms as an effective role model for a region that may no longer be allowed to be old-fashioned. Meanwhile, Latin America can perceive these reforms as an indication that controversial topics such as abortion, same-sex marriage, and legalization of drugs need to be approached differently, but still must be tied to some of the country’s basic beliefs.

President Mujica has taken an initiative of challenging some basic social issues. His revolutionary reforms do not necessarily mean that these legislations have successfully rid the country of its myriad of social and economic problems. Uruguay still faces challenges with poverty, education reform, inflation and implementation of the drug legalization bill, which could play a key role as deal breakers with the general elections in few weeks. The leading opposition presidential candidate, Luis Alberto Lacalle Pou, signals that the drug legalization measures will not readily be implemented with the new administration.[19] Furthermore, a political shift could undo Mujica’s reforms whether they are repealed or not by the new president. The next president will have big shoes to fill in regards to setting an example in progressive policymaking in the region because of the spate of legislations undone by Mujica’s dramatic moves.