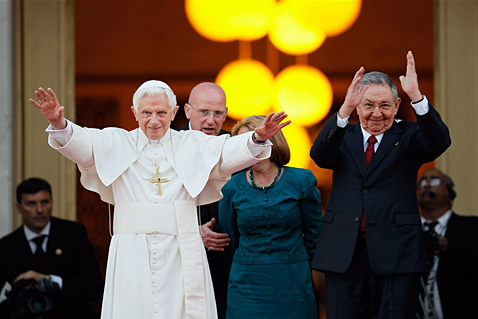 The Cuban government, the Roman Catholic Church and the Cuban humanitarian group, the Ladies in White (Las Damas de Blanco), all formidable entities in their own right, found themselves thrust upon the world stage together this week as a result of Pope Benedict XVI’s first trip to Latin America in five years. Ahead of the papal’s three-day visit to Cuba,many of the Ladies in White were held by Cuban officials; a series of detainments that were initially prompted by the occupation of a local church in Cuba by members of the Republican Party of Cuba.  The anti-Castro demonstrators were attempting to influence the Pope before his impending arrival to directly address the human rights abuses leveled against the Castro regime.

The United States, a long time advocate of the Ladies in White, naturally glommed onto the public protest and, unsurprisingly, Havana was quick to accuse Washington of propping up the “subversive” movement. Tommy Vietor, a spokesman for the National Security Council said the detainments revealed “the disdain of the Cuban authorities” for civilian rights and critiqued “the acts of those who are standing in the way of the basic aspirations of the Cuban people.” For breaching the strict, state-administered regulations of their weekly protest, the Cuban government has prohibited the Ladies of White from future protests, revoking what was already a narrowed platform to express their views. In light of their suppression, it was expected that Pope Benedict XVI would emulate his predecessor John Paul II in publicly denouncing the Cuban administration as well as meet with the religious dissidents. However, the pope showed a reluctance to be drawn into alliance with either the Cuban administration or the anti-Castro dissidents, even those that are directly affiliated with the Church, demonstrating the Catholic institution’s principal intent to become reconnected with Cuban society at large and avoid intervention on domestic matters.

The Ladies in White March On
Back in October 16th 2011, the Ladies in White marched in somber stride through the streets of Havana holding white gladiolas just as they had done for eight years after every Sunday mass at the Santa Rita de Casia Catholic Church. However, there was a special significance attached to that day; it was the first silent protest without their founding member, sixty-three year old Laura Pollán, who succumbed to cardiac arrest while under hospital care.

Pollán founded the Ladies in White after her husband, Héctor Maseda, an independent journalist, was arrested during the three day ‘Black Spring’ raid in March 2003, along with seventy four other Cuban dissidents. The journalists were accused of “subverting the internal order of the nation” and received sentences ranging from six to twenty-eight years incarceration. Gradually, Pollán mobilized the wives of other dissidents and held routine marches to push for their release, even under conditions of adversity, when pro-government protestors would harangue the group during their marches.

In March 2011 the remaining dissidents were released, largely due to the efforts of the Spanish government and the Catholic Church in reaching an agreement with Raúl Castro for the prisoners to flee into exile; a condition that was not entirely adhered by those that were released. In spite of certain developments, such as the release of those incarcerated during the Black Spring, the subsequent fragmentation of membership resulting from the emigration of reunited families as well as the regrettable death of their leader, the Ladies in White have continued to demonstrate after every Sunday mass. The impending arrival of his Holiness was viewed as an opportunity for their claims to be finally heard by the leader of the very institution that helped them form an unbreakable solidarity. However, compromised by the government’s authority, the Ladies in White and the Catholic Church were unable to establish a direct connection on this particular trip.

The Prospect of Conciliation Mediated by the Pope Benedict XVI
Received by Raúl Castro at the Santiago airport on March 26th, the papal’s visit to Cuba is meant to commemorate the 400thanniversary of the El Cobre sanctuary of the country’s patroness, our Lady of Cobre, but there were certain other elements that comprised his visit. Of course, the primary agenda was to reach out to the Cuban majority and reinstitute the Catholic faith at a time when the country has been incorporating certain minimalist civil liberties and opportunities to its citizenry. Most of the Cuban faithful fled to the United States after the 1959 Cuban revolution, the vast majority of which now reside in Miami, but an estimated 800 Cuban Americans made the voyage to attend the Pope’s mass in Havana.

While the nature of the Pope’s visit was claimed to be “pastoral,” in light of the recent demonstrations in Havana, comparisons were inevitably drawn to Pope John Paul II’s visit to Cuba in 1998, which had marked inferences regarding the protection of civil rights and releasing incarcerated dissidents. Apart from the expected denouncement of the U.S. embargo on Cuba, as previously iterated by Pope John Paul II, Pope Benedict XVI was unlikely to be drawn into the current political skirmish. Not only would intervention threaten the Catholic Church’s mending relationship with the Cuban administration and thus its long-term goals in the country, but because it wouldn’t correspond with the Church’s current emphasis on counteracting its dwindling supporter base. The Pope, however, did give a frank assessment of Cuba’sMarxist  political and economic framework, claiming it “no longer corresponds to reality.” But far from advocating outright economic liberalization, he also criticized the West’s capitalist model for leaving “humanity devoid of values” and “defenseless” against predatory powers.

The Resurgence of Catholicism in Cuba?
In some ways, there hasn’t been a better time for the Catholic Church to reestablish itself into the social fabric of this Caribbean island state, due in part to the efforts of Cuba’s Cardinal Jaime Ortega, who has been able to position the church increasingly as an intermediary force on the island. Under Ortega, the Church has offered care centers and limited training programs and pushed for church administered education, not to mention it was the Cardinal who helped to negotiate the release of the Black Spring political dissidents. With various external forces trickling into the socialist state, the combination of light economic and social reforms under Raúl Castro’s government has highlighted a degree of adaptation of the stringent style of governance that his brother practiced. Raúl’s burgeoning relationship with the Cardinal is indicative of the leader’s acknowledgement of the Church as a positive influence in not only uniting the population but also providing them it with a semi-autonomous authority capable of adequately nurturing the population. As it seeks to gain legitimacy outside of its U.S.-inflicted seclusion, the promotion of religious freedom will deliver the benefit of reinforcing Cuba’s association with that of the Latin American region in which Catholicism plays a prominent role.

On the other hand, with the backing of  the Cuban administration, the Catholic Church now has the capacity to influence public discourse in Cuba over the long term, a prospect that would have been vulnerable if it visibly sided with the Ladies in White. As he stood before several hundred thousand Cubans at the open-air Mass in Havana, Pope Benedict XVI used the opportunity to directly connect with the public, ticking all the right boxes. In his speech, the papal urged for the recalibration of Cuban society characterized by greater civil liberties and material resources for Cubans, going on to denounce the U.S. embargo, all of which reinforced the papal’s indifference to government influence. Cuba’s Minister of Planning and Economy, Marino Murillo, responded promptly and succinctly, confirming that in Cuba, “there would be no political reform.” The various initiatives of the Church, such as instituting Catholic teaching in schools, gaining access to broadcast networks, declaring Good Friday a public holiday and building new churches have been proposed to the Cuban administration but the general consensus is that the status quo will remain. However, as marginal reform occurs under Raúl Castro’s administration and as both the president and Cardinal Ortega form a deeper relationship, it is the sense of timing that could ensure that the pope’s visit will act as a catalyst for change in the hearts in minds of the Cuban public.

This analysis was prepared by Faizaan Sami, Research Associate for the Council on Hemispheric Affairs.
Please accept this article as a free contribution from COHA, but if re-posting, please afford authorial and institutional attribution. Exclusive rights can be negotiated.