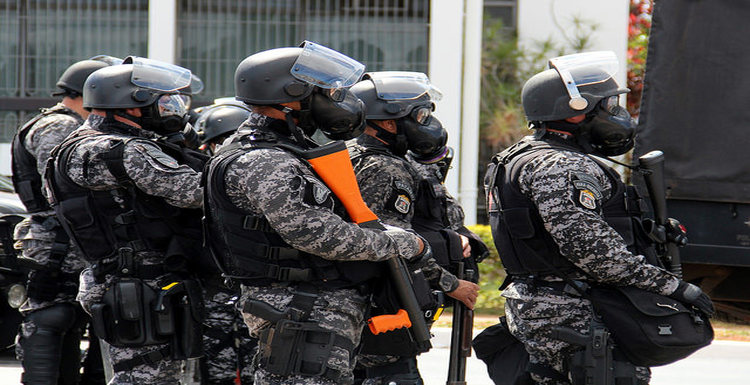 Latin America is witnessing a steady movement toward the militarization of the police, with the armed forces taking over many of the day to day functions of community policing.  But given Latin America’s past troubles with military governments, this development is raising serious concerns. In the 1960s and 1970s a spate of coups across the region brought harsh right-wing regimes to power, with the governments of Argentina, Bolivia, Brazil, Chile, Paraguay, and Uruguay deploying their militaries as internal security forces, purging their countries of domestic political opponents, real and imagined. Now many fear that we may be heading back toward the bad old days, with unbridled militaries running riot over the citizenry.

Several Latin American countries are making constitutional changes that are giving them great liberty to allow the military to deal with internal security matters. This often has come in response to the threats associated with drug cartels and their expanding band of enforcers. Maras, or street gangs, have become more and more heavily armed, their numbers too often supplemented with former police officers and paramilitary members with military training. With police forces seriously outgunned, authorities have seen the need to use their military forces to combat these rising threats.

In Ecuador and Perú constitutional provisions already have allowed the military to join local police forces under special circumstances, such as dealing with counterterrorism or anti-narcotic operations.[i]

Current rules require that a state of emergency or “extreme cases of siege” be declared, and set explicit limits for the duration and scope of military assistance.[ii] However, Ecuadorian lawmakers are now taking up proposed constitutional measures that would facilitate the militarization of police departments.[iii] In Paraguay, where military forces are already assisting in operations against insurgent groups, such as the country’s ultra-left wing guerilla group, Ejercito del Pueblo Paraguayo (Paraguayan People’s Army, or EPP), the legislature recently removed the laws requiring a declaration of a state of emergency prior to sending in the troops.[iv]

Ecuador has suffered prior human rights abuses at the hands of the police and military, particularly under the administration of León Febres Cordero (1984-1988). During his time in office, President Febres Cordero led a crackdown against ¡Alfaro Vive, Carajo! (Alfaro Lives, Dammit!, or  AVC), a left-wing guerrilla group founded in 1982 (named after late nineteenth early twentieth century reform leader, President Eloy Alfaro). During Febres Cordero’s campaign against the rebels, reported instances of human rights abuses increased dramatically. According to the 2012 Ecuadorian Commission of Truth and Human Rights, of the nation’s total 456 registered victims of crimes against humanity, 68 percent (310) came during the Febres Cordero’s administration.[v] The Commission report detailed the arrest of two former defense ministers and eight retired military and police officers for their involvement in the 1985 disappearance and torture of three suspects.[vi] The report makes sobering reading. There is good reason to fear bad actions by the Ecuadorian military or by a militarized police force.

Nevertheless, Gabriela Rivadeneira, President of the Ecuadorian National Assembly, has introduced a set of constitutional amendments proposed by the governing Patria Altiva y Soberano (Proud and Sovereign Fatherland, PAIS). Of the 17 proposed reforms, two are particularly salient:  ending term-limits for public officials and expanding the role of the military in domestic security.

Of course, some stability in office is not necessarily a bad thing for Ecuador; the nation suffered through a decade of political from 1997 to 2007, a time that that saw seven presidents (eight by some counts) try to govern this restive country. While President Rafael Correa (2007 to the present) originally said that he would not be seeking reelection in 2017, now, with the date approaching, he seems to have changed his mind. [vii]  Jaime Nebot, arch-conservative mayor of Guayaquil, has actively supported this policy shift. Like Correa, Nebot will now be able to seek reelection.

If Correa is reelected in 2017, he will enjoy more time to implement his widely popular social programs and secure his legacy as Ecuador’s longest-serving president. But if Correa is elected again, we may well see Ecuador expanding the use of its military forces in a domestic policing role.

Under Section Three of the Ecuador’s new 2008 constitution, “[i]nternal protection and upholding law and order are exclusive duties of the State and responsibility of the National Police Force.”[viii] Meanwhile, “the fundamental mission of the Armed Forces,” section three of the constitution continues, “is the defense of the country’s sovereignty and territorial integrity.”[ix] The amendment proposed by Alianza PAIS would increase the military’s internal role, adding that the job of the armed forces would also be to help assure “the comprehensive security of the State.”[x] These proposed changes in the language of the constitution would allow Correa, and any subsequent president, to send in military troops to resolve most domestic security matters.

These proposed changes come at a time when the Ecuadorian military is seeking to evaluate the threat level from a few small armed groups that have emerged around the country. One such, the Fuerzas insurgentes revolucionarias armadas de Ecuador (Armed Revolutionary Insurgent Forces of Ecuador, or FAIRE), had never been heard from until they took credit for a double bombing in the port city of Guayaquil in November 2011. The actions were mostly a political stunt, the explosions showering leaflets aimed at recruiting youths to rise up against the government.[xi] Nevertheless, the presence of insurgent forces, however tiny, has provided a justification for an expanded internal military role.

Correa has had a rocky relationship with the armed forces since taking office. In 2010, after announcing plans to roll back promotions and bonuses for the army, several officers and soldiers seized the president, holding Correa for several hours at a Quito hospital facility. These actions were an attempted coup, at least in the estimation of Correa, his allies in Alianza País, several newspapers, and other regional governments.[xii] After loyal units in the armed forces suppressed the uprising, Correa worked to improve overall government/military relations. But, critics charge, Correa has sought to reward loyal elements in the military by steadily increasing their internal mission. “A poor country cannot afford the luxury of having armed forces just for use in conventional warfare,” Correa explained.[xiii]

Another reason offered for using the military in Ecuador’s internal affairs is the problem of police corruption. Extortion, especially of undocumented immigrants, is an all too common practice for the nation’s police. In 2009, a leaked U.S. diplomatic cable disclosed that the commander of the Policia Nacional de Ecuador (National Police of Ecuador or PNE) was facilitating the sale of stolen cars and receiving generous kickbacks from a Chinese human trafficking ring.[xiv] In an effort to control such abuses, in 2011 Correa announced an initiative for the granting of amnesty to any officer who would report police corruption. Yet despite this effort, police corruption remains a serious problem in Ecuador, as it is in much of Latin America. Moreover, as Mexico has learned only too well, using the military to carry out police functions usually means that the bribes start to flow to the military and away from regular police. The police can be angry about this, but the military is too well armed for them to press the point too much.

Currently Ecuador has 1,871 soldiers serving in policing roles, but Correa insists that the military units will not take over police jurisdiction or serve as substitutes for police.[xv] Opinion is divided on what to make of these claims. Opposition leader Francisco Huerta has voiced concerns that the military could now be converted into a politicized repressive force for advancing the left-wing Correa agenda.[xvi] But researcher Gabriel Aguilera, Assistant Professor of International Security at the U.S. Air War Colleges, is insouciant, noting that the Ecuadorean army as it is “the only major institution that has continued to function reasonably well throughout the country’s historical turmoil.”[xvii]

During a 2014 mid-September political rally in Quito, government security forces reportedly used excessive force to disperse demonstrators. According to witness reports, dozens of protestors suffered physical abuse, including severe beatings and electric shocks during their arrest and detention.[xviii] José Miguel Vivanco, Executive Director at Human Rights Watch, noted that “[p]rotestors who engage in violence should expect to be held to account, but under no circumstances should be brutalized in detention, nor should their rights be violated.”[xix] A report from the Ecuadorian Red Cross leaked to the media said that of 53 detainees visited in detention, 47 (a total of 270 arrests were made at the protest) had visible signs of injuries.[xx] Authorities hold that the injuries suffered came at the time of the arrests, noting that more than 30 police officers were also injured in the melee. President Correa praised the National Police for their role in quieting the unrest, but went on to threaten the lawyers for those protestors charging abuse, and lashed out at the media outlets that released information on the demonstration violence.

Ecuador appears set to join a long list of countries in the region that have introduced changes in the law allowing the armed forces to assist in internal security. Governments in Mexico, Brazil, El Salvador, Guatemala, Honduras, Paraguay, Perú, Venezuela, Chile, and Argentina have already been using their military forces to fight everything from low-grade insurgencies to drug cartels operating on the Mexican–U.S. border. If, as expected, Ecuador enacts the proposed reforms, it will be joining the ranks of countries that are removing restrictions and allowing the president to dispatch armed forces to deal with domestic security issues.