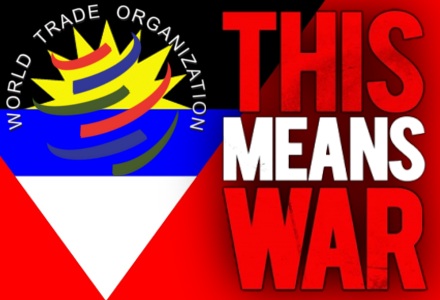 In a January 28 ruling, the World Trade Organization (WTO) signaled to Washington that it must exist in the brave new world it helped create. In a simmering trade dispute between Antigua and Barbuda and the United States over online gambling, the trade body came down in favor of the Caribbean island nation. In the mid-1990s, a number of foreign investors aided the buildup of sophisticated gambling infrastructure to help supplement a worrisome decline in tourist revenues.In the following ten years, online gambling circles pumped 3.4 billion USD into the Antiguan economy annually and had become the second largest employer on the island. [1] However, gambling is illegal on the federal level in the United States where U.S. law bans its citizens from gambling online, a policy that St. John’s blames for the decline of the nation’s economy. St. John’s has interpreted this law as a violation of their trade agreement with Washington, where in 2005 Antigua filed a complaint with the WTO, that the WTO ruled valid in 2007. Discover the legal gambling sites where you can engage in to play casino and can do sports betting at one place tangkasnet. [2]

Reflecting on the recent WTO ruling, Antigua’s economy demonstrably is too small to easily benefit from significant tariff increases regarding the access of U.S. products—the customary WTO-sanctioned response for these types of violations— so St. John’s sought a different form of compensation under the WTO’s cross-retaliation regimen.[3] Antigua’s plan, supported by this latest WTO judgment, lies in the concept of state-sponsored piracy—setting up a website where users could pay for media content and St. John’s would not be required to pay U.S. copyright royalties. This website concept has the potential to offer users the ability to download, for example, Zero Dark Thirty, Argo, and Lincoln for less than a dollar and songs for mere pennies. Understandably, Washington has expressed outrage at the WTO findings, with Nkenge Harmon, a spokeswoman for the Trade Representative’s office (USTR) lamenting that St. John’s had “repeatedly stymied negotiations with certain unrealistic demands.”[4] Harmon went on to comment that the government-authorized copyright infringement arrangement would “serve as a major impediment to foreign investment in the Antiguan economy, particularly in high-tech industries.”

If the United States’ claim that the world’s 15th smallest economy is engaged in some form of economic bullying—attempting to force its hand in altering gambling laws by increased pressure from Hollywood lobbies—seems farcical, then so be it. Nevertheless, this decision presents a troubling scenario for Washington. American corporations largely have taken advantage of the swelling international tribunal system that encourages investor to state relations and Washington has controversially promoted such terms in its recent free trade agreements.[5] Now, Washington is experiencing the other side of international trade regulations, and if a reward of 21 million USD to Antigua and Barbuda does not prompt a recalculation of US trade policy in this part of the Caribbean, perhaps 8 billion USD in litigation arising from Chinese complaints will.

With an economy mired in public debt, there is no question that Antigua could use the additional revenue. St. John’s, the capital of Antigua, is currently participating in a 36-month Stand-By Agreement with the International Monetary Fund after a bruising 2008 financial crisis turned into the banking crisis of 2011.[6] With businesses closing and unemployment rising, St. John’s has turned to increased taxes—particularly entry and exit surcharges for travel to the country— in order to generate additional revenue, a move that most likely will further harm Antigua’s already-struggling tourism industry.[7]

Yet it is still unclear whether this particular WTO dispute is a legitimate step toward St. John’s sponsoring an online piracy haven or if these contenders are using the edict as an American response to illegal gambling. It is far more likely that reality in this instance lies closer to the latter, as Washington has ample reason to make amends with St. John’s gambling strategies. Antigua is situated on extremely important trade routes to the United States, lies only 300 miles from Puerto Rico, and has hosted a U.S. military presence for much of its modern existence as a sovereign entity. [8] What is clear, however, is that the WTO ruling will provide ample rhetorical material for St. John’s fellow Bolivarian Alliance members and a blueprint of how to utilize the evolving international system to improve an otherwise asymmetrical position on a number of debating points. And while Washington has taken advantage of a self-serving trade system for the past 20 years, it should brace itself for the system to push back.