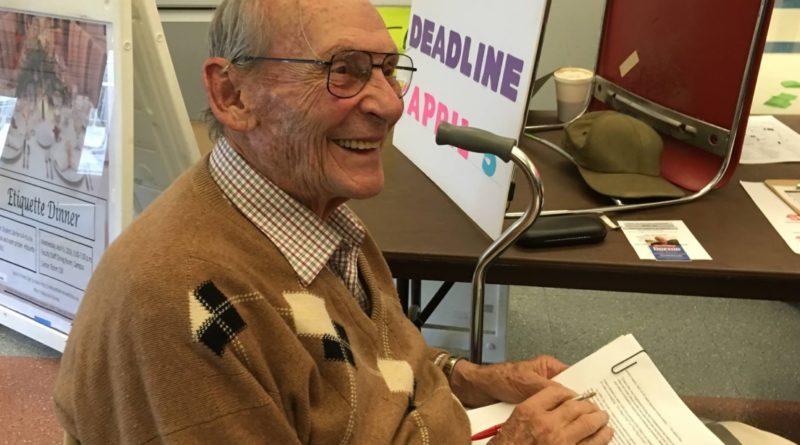 The Reverend Phil Wheaton, an activist and community organizer in the Washington D.C. area, passed away this month. He had worked tirelessly for humanitarian causes, including for Salvadorans who came to the United States in large numbers in the 1980s fleeing their country’s civil war. Sonia Umanzor is one of many Salvadorans who experienced Phil’s solidarity and commitment first-hand. This is her tribute and homage to Phil.

On the morning of May 9 and in the middle of this terrible pandemic, I awakened to the sad news of the physical passing of you, our great brother, friend, and compañero, Phil Wheaton. We knew you affectionately as Felipe. It seems that this world does not want to let you go because this world will never be the same without you, my brother.

Sometimes you seemed so tall and so brave to me, so enraged by the injustices and crimes committed by the most powerful people, while being so tender with us, the most vulnerable, the most long-suffering. You always had an answer, always looked for a path to oppose the mistaken policies of the Empire, and always sent a message of complete intolerance of barbaric acts and the suffering of the peoples of our AMERICA.

Losing you is causing me great pain, as if I had lost a close relative. It must be because we saw you take on our pain and undoubtedly become one of us.

Felipe, you were a true champion of solidarity—not from afar, not from a desk—but by putting your feet into the mud with the most humble people and sharing their risks. You supported Nicaragua throughout the Contra war and then went to live there. You strongly opposed your country’s policies towards our Americas, the Caribbean, and the world.

Honor and Glory to this comrade in struggle who fought shoulder to shoulder with us for a more just world for all people.

I recall how you worked to build the sanctuary movement. In your country you fought so that we refugees and persecuted embodiments of Christ who were fleeing war could have someplace safe to live. When I was granted sanctuary in 1984 at the Church of the Savior, it felt like I was being lifted by miraculous hands from the darkness into light, allowing me to rest in a safe place, no longer waking up screaming in the middle of the night with the recurring nightmare that my family and I would be beheaded by morning. That solidarity brought me back to life and gave me more strength to fight for those following in my footsteps and for my country, El Salvador, which was being bled to death by bombs Made in the USA.

Felipe, I know that you came to realize how important you were for the poor. You always fought to establish the Kingdom of God in this world. You knew that it was possible. You considered it an order from God, a just and generous God. That is why you were so committed to defend immigrants and the poor, without hesitation or doubt. You preached by example. I saw that until the last day of your life.

And you celebrated the Eucharist with so much faith and together we sang, “Let us go now, to the banquet, to the feast of the universe. The table’s set and a place is waiting, come everyone with your gifts to share.”

And I will remember you and your long, chatty visits with Reverend Whit Hutchison at our Fr. Rutilio Grande House in Takoma Park, when you would pass by walking your dog, or when you would come to meetings or to celebrations of the lives and example set by the Jesuits who were murdered in 1989, or in honor of Monsignor Romero, or Father Rutilio Grande.

We Salvadorans are grateful to you for your love and devotion. We will stay with you and will not say goodbye, only, “You are with us always, my dear brother Felipe.”

Sonia Umanzor is a Community organizer in the Washington, DC metropolitan area.