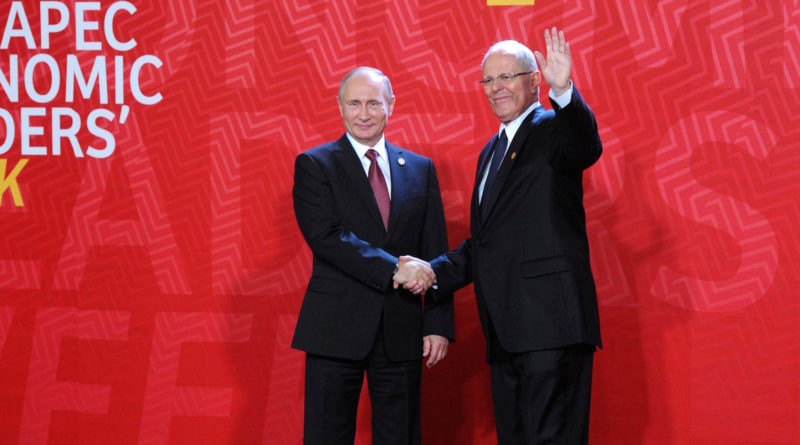 Given the recent pushback against trade liberalization in Europe and the United States, Peru’s recently inaugurated President, Pedro Kuczynski, has come out to double down in its defense and acclaim its value in expanding Peru’s economy.[i] Kucyznski’s goal is to not only expand trade but also halt potential protectionist trade policies.[ii] Trade liberalization is the removal of barriers to international trade such as taxes on imports (tariffs), non-tariff barriers, and quotas in order to increase the flow of trade between nations. Protectionist trade policies contrast with this concept by erecting artificial barriers to trade with the goal of promoting domestic business interests.[iii] In light of the recent United States presidential election, the Trans-Pacific Partnership (TPP) is now in dire straits, making the recent Asia-Pacific Economic Cooperation (APEC) summit all the more important for those interested in establishing closer trade relationships among countries on both sides of the Pacific.

APEC, founded in 1989, is made up of 21 member states that make up 49 percent of world trade, 54 percent of global GDP, and 40 percent of the world’s population. This is the second time that Peru has hosted the APEC summit, the first being in 2008. In the last eight years, the country has improved its economic status and its government has expressed a desire to play a larger role in transpacific relations.[iv] Given the likely fall of TPP, Kuczynski will now have to seek other opportunities to expand trade with APEC members representing the likeliest candidates.

TPP’s supporters major concern is U.S. retraction from the trade pact. The deal was designed with the United States as the principle market and the agreement aimed at harmonizing the standards of other signatories with those of the U.S. Without U.S. participation, there is concern that many countries will shoulder the cost of trade harmonization without the expected benefit of the U.S. market. Several officials have voiced their concern. Japanese President Shinzo Abe said that “the TPP would be meaningless without the U.S.”[v] Canada’s trade minister, Chrystia Freeland, has also pointed out that the structure of the TPP deal requires U.S. participation for it to function.[vi]

During the APEC Summit, President Obama attempted to assuage fears that U.S. policy is retracting permanently from free trade stating that the United States’ progress is a “zig-zag [and] not a line.”[vii] Obama’s comments counter those of president-elect Donald Trump, who made numerous claims during his campaign that he would kill TPP and renegotiate the North American Free Trade Agreement (NAFTA).[viii] Obama appeared to be suggesting that President-elect Trump would either change his mind or become more amenable to possibilities related to free trade. However, Trump has strongly reaffirmed his opposition to TPP, dispelling any doubts as to what his intentions are following his ascension into office.[ix]

Peru, however, is not wasting any time in taking steps in response to the likely end of TPP. In light of a strong and growing relationship with China, Peru and Chile have vocalized an interest in joining the Regional Comprehensive Economic Partnership (RCEP) a trade-pact led by China and consisting of 16 member countries.[x] RCEP could still serve Kuczysnki’s goal of opening access to new markets with harmonized standards and low tariffs. According to Peruvian officials, the Andean nation has also started bilateral trade negotiations with Indonesia and could strengthen ties with Russia.[xi]

Peru’s interest in developing trade relations is related to Kuczynski’s goal of expanding the country’s infrastructure in the form of railways, roads, and investment in copper processing. Through this strategy, Peru hopes to increase its exports of high value added goods and phase out, to some extent, the reliance on primary commodities for exports. In the short term, China could play an extremely valuable role as a potential investor in the Andean country.

This was made explicit by Kuczysnski who, following an event at the Bank of China Headquarters, stated, “we are not seeking loans of financial aid, but investment and international cooperation… that’s why I came to Beijing with my ministers and my Vice President.”[xii] However, China’s past approach to many Latin American economies demonstrates a tendency towards dependency theory by developing trade deals in which commodities are exported to China to be processed and turned into higher value goods, with infrastructure investments only focused on supporting this arrangement.[xiii] Peru’s desire to develop a more advanced economy and China’s interest in securing cheap commodities may very well run counter to each other.

While China’s capital is valuable, Peru will likely need to strengthen trade ties with many other countries. The TPP agreement was expected to expand Peru’s exports by a projected “$2.25 billion USD in products and services to five key countries [with] which it previously had no trade deal,” particularly the valuable markets of New Zealand and Australia.[xiv] Developing new trade relations will be necessary as Peru’s current balance of trade is strongly in China’s favor. Fourteen percent of Peru’s exports and 23 percent of its imports go to China as of November.[xv] This means that even with an expansion of trade relations with China and an attempt to foster manufacturing industries such as copper refinement, it is likely that a trade imbalance will persist.[xvi] Peru is also discussing a new bilateral trade agreement with Russia in the form of seventeen new deals, projected to value $1 billion USD, which were released to the public this November.[xvii] However, what form these agreements will take has, so far, been rather murky.

Ultimately, Peru’s primary focus, under Kuczysnki, is on entering into a multilateral trade deal with other Pacific countries, hence the importance the Peruvian government has placed on TPP. Peru wants to increase its overall market size and avoid a tangle of bilateral trade deals that all have their own unique set of rules. As a result, Kuczynski is likely to pursue a neoliberal expansion of the Pacific Alliance to secure investment and open markets for exporting manufactured goods. The target markets that TPP would have opened for Peru were New Zealand and Australia.[xviii] It can only be hoped that the future trade pacts Peru pursues will be more to the public’s benefit. TPP’s strict copyright enforcement, for example, would have reduced the accessibility of medicine for many of Peru’s poor.[xix] Further attention must also be brought to the inclusion of provisions like the Investor State Dispute Settlement mechanism, which have been closely examined in previous COHA reports, to protect the Peruvian government and people from being strong-armed by corporations’ one-sided litigation.[xx]

With the vacuum created by TPP, the possibility of RCEP becomes greater. Given Australia’s current trading relationship to China in agriculture, it is possible that the Australian government would consider such a trade deal.[xxi] As a result, Peru’s other viable access point to the Australian market could be through RCEP either as an individual country or more likely with the Pacific Alliance, given the Pacific Alliance’s original design to strengthen the collective member states’ bargaining power in forging new trade relations. Whatever comes in the future, the Peruvian government is interested in developing new multilateral free trade agreements, with or without the United States.

[vii] Obama Bids Farewell to the World With an Impassioned Defense of Immigration (El País, November 21, 2016)

[xiv] Post, Colin. What Did Peru Get Out of the Trans-Pacific Partnership? (Peru Reports, November 12, 2015)

[xix] Post. What Did Peru Get Out of the Trans-Pacific Partnership?