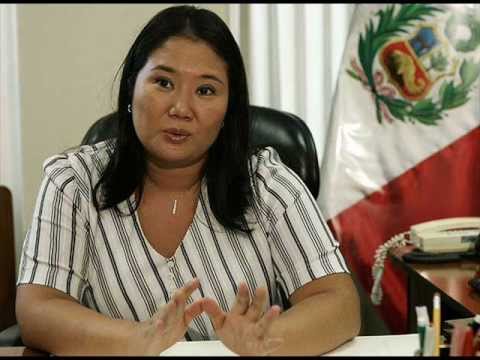 By Stephan Horler, Research Associate at the Council on Hemispheric Affairs

The race for the Peruvian presidency has seen its share of hiccups along the campaign road. A number of candidates have been deemed unfit to lead the country, and as a recent editorial by VICE News’ Simeon Tigel asserts, the 2016 first round has resembled “a police lineup more than a contest to see which distinguished public servant wins.” [1]  So far, this election has been noteworthy for non-political matters and scandals. The disqualifications of presidential candidates Julio Guzmán, an economist, and César Acuña, a businessman, in early March added to the chaos.

Amid the disorder, one candidate has infamously held the number one spot in the race since she announced her candidacy: Keiko Fujimori. According to all the major election polling institutions including GFK, IPSOS, DATUM, and CPI, Keiko on average has 15 percent higher approval than her competitors and the support of roughly 30 percent of Peruvians— something problematic as the April 10 first-round balloting quickly approaches. [2] A daughter of the notorious former dictator and currently imprisoned convict Alberto Fujimori, she has conducted a political career and a presidential campaign that seem to echo her father’s tenure as president (1990 to 2000), which was riddled with corruption as well as human rights abuses. By linking her campaign to her father’s “achievements,” she has sparked fears that if elected she could replicate the worst of the Fujimori dictatorship. Even so, Keiko continues to gain support.

Unsurprisingly for Peruvians, Keiko’s popularity has sprouted not only from her extensive campaigning, but also because of her father’s legacy in Peruvian politics. Alberto Fujimori, a former rector of of La Molina National Agrarian University (Universidad Nacional Agraria La Molina), began his tenure in politics in 1990 as the successful presidential candidate of his political party Change 90 (Cambio 90)—and a viable alternative to the era’s current frontrunner and national icon, novelist Mario Vargas Llosa. [3]

The Fujimori administration can be boiled down to three main components: (1) his right-leaning economic policy “Fujishock,” which stabilized the Peruvian economy while fueling international investment in industry; (2) his strong and violent stance to rid Peru of the haunting menace of two terrorist forces, Shinning Path (Sendero Luminoso) and the Túpac Amaru Revolutionary Movement (MRTA); and (3) his tolerance of excessive and disastrous levels of corruption in the government. [4]  Fujimori devised the famous self-coup (autogolpe), or presidential coup, alongside the country’s military forces. He shut down Congress and ruled essentially by decree. [5] Along with Intelligence Minister Vladimiro Montesinos, he personalized the government to their standard of autocracy. His administration’s 10-year rule featured defamation, extortion, lies and cynicism. For Julio Cotler and Romeo Grompone of the Institute of Peruvian Studies, it exemplified mafia-style characteristics. [6]

This style of government paved the way for two of the most controversial human rights crises in the region to occur—the massacres of Barrios Altos in 1991 and La Cantuta in 1992. [7]  Fujimori ordered the police-military death squad Grupo Colina to execute Shinning Path members in Lima’s Barrios Altos neighborhood, and at the Universidad Nacional de Educación Enrique Guzmán y Valle, or La Cantuta, in the Chosica area. [8] The two attacks resulted in the disappearances and deaths of more than 30 individuals including university members, women, and children. [9]

Keiko’s career in politics began during this period of social and political instability when she replaced her mother, Susana Higuchi, as the de facto first lady of her father’s administration. Higuchi had been removed from her position by her husband after she spoke against the administration’s corruption and human rights abuses. [10] After she was held hostage for years in the Governmental Palace, where she was tortured, her health deteriorated and she required, and received, medical attention.[11] On January 21, 1994, Keiko visited her mother at the hospital where she was interred. What might have been a warm family moment was turned into a political move, as Keiko brought along an official state photographer who later distributed selected images to the newspapers.[12] During the visit, Keiko urged her mother to not speak to the press of the torture Higuchi had endured from her father.

As a member of Congress years later (from 2006 to 2011), Keiko was regarded as irresponsible and mediocre. [13]  She accumulated more than 500 absences from her congressional forum responsibilities, including from a committee on which she held a prominent position. [14] She did win passage of six of the 21 legislative measures she proposed on the Congress floor. Many fear that if elected president Keiko would nominally preside without making any major achievements.

She lacks impressive experience in any field of work. Her LinkedIn profile shows only three positions under her name.[15] Her team of ministers and members of Congress develops her policies—and she plays little role in the process; most of them were active members of her father’s administration who aim to continue their political careers through a Keiko presidency.[16]

Despite her recent effort to distance herself from her father’s years in power, his influence is noticeable. She continues to credit her father for stabilizing the economy—which he certainly did, by strictly following the neoliberal Washington Consensus—and for solving the terrorism problem—which he didn’t.

The levels of misadministration and corruption in his administration rendered his retaliation against terrorist forces unplanned and futile. The Special Intelligence Group (commonly known as the GEIN, for Grupo Especial de Inteligencia), was a special unit of the counter-terrorism directorate police force (Dirección contra el terrorismo, best known simply as DIRCOTE) that lacked oversight by the government or the Intelligence Ministry; but through careful planning and execution it captured the genocidal Shinning Path leader Abimael Guzmán. [17] So far in the current campaign season, however, many Peruvians give the former president credit for this achievement. The renowned Peruvian journalist César Hildebrandt sees such accreditation as a case of “Peruvian Alzheimer’s” that has stricken the nation’s recent memory and allowed for Fujimorism (Fujimorismo) to continue gaining support.[18] In many ways, this has also allowed Keiko to get away with using ministers from her father’s administration to campaign on her behalf, making clear her connection to that political era. While her father’s destructive epoch concluded in 2000, his legacy looms over current elections and continues to manifest itself in Keiko’s campaign.

The Retaliation to the Keiko Campaign

After Peru’s Special Election Jury (or JEE, for Jurados Electorales Especiales) in early March revoked the eligibility Guzmán and Acuña to run for president (rulings upheld on March 11 by National Electoral Jury, or JNE, for Jurado Nacional Electoral), the JEE began investigating Keiko’s campaign following allegations that she had been seen giving out monetary donations in the name of her candidacy. [19] (Acuña was charged with the same transgression.) The allegations originated with a February 14 event hosted by the youth organization of Keiko’s political party, Popular Force (FP, for Fuerza Popular), in the city of Callao. [20] While a colleague of hers said she had had no affiliation to the group’s monetary funds since the creation of the Political Party Law, videos had surfaced in the media, which various news outlets reported seemed to show the candidate herself handing envelopes filled with cash to supporters. [21] Many top FP members were also under investigation by the JEE for alleged gift-giving along the campaign trail, which ended the candidacies of two of them. The investigation is looking into 11 other Fujimorist congressional candidates, including Keiko’s bother Kenji.[22] To many, the allegations of Keiko’s donations justify predictions that if elected she will inevitably lead an administration lacking solid values and integrity. [23]

Growing uneasiness regarding Keiko and the FP has led to widespread protests against her candidacy, notably on social media. Protestors demand that justice be served, as it was with Guzmán and Acuña. During Keiko’s campaigning on March 11 in the city of Cusco, more than 600 people demonstrated against her in the city center; protestors stayed throughout the day, holding aloft signs saying “Out with Keiko.” [24]  That same day, the first “No to Keiko” march was organized by the social activist group Collective Dignity (Colectivo Dignidad) in Lima’s San Martin square. This gathering of about 2,000 participants represented a greater scale than what was seen in Cusco, with group of youths marching toward the JNE headquarters demanding a verdict disqualifying her from the elections. [25] Collective Dignity continues to use social media extensively to protest what they portray as the “social injustice” of Keiko’s campaign.

On March 24, the JEE released its verdict on the Keiko investigation finding her political party not in violation of the Political Party Law and not to have conducted illicit activities. [26] Prominent political leaders and activists such as writer Juan Manuel and journalist Claudia Cisneros regard the JEE’s verdict as unjustified. [27] Fujimorist affiliates defend the decision, but the investigation process as a whole is being criticized. The JEE seems to have had as much evidence of illicit behavior against Keiko as against Acuña, but did not disqualify her.

Despite Keiko’s still having a good chance of proceeding to the June 5 second round of elections, many argue that her campaign stops there. According to the El Comercio-IPSOS political simulator focusing on her chances of victory in second round elections, she seems to hold the upper hand by a slim margin over most other frontrunner candidates, except former prime minister Pedro Pablo Kuczynski (commonly known as PPK), leading his political party Peruvians for Change (Peruanos por el Kambio). [28] Kuczynski has surged in the polls, climbing back to second place after the disqualifications of Guzmán and Acuña. Other candidates gaining rapid support include journalist Alfredo Barnechea and Veronika Mendoza, a member of Congress. [29] Their rapid growth in recent weeks could change the arena for the second round of elections.

The Future of the Keiko’s Support

As Keiko’s political party continues to maintain itself as the frontrunner in the elections, the political atmosphere continues to heat up for all candidates. Her father’s legacy of crippling Peru’s institutions is a piece of history that could be difficult to shake. Critics see Keiko’s contentious political behavior as a reflection of her father’s politics and values.

A possible Keiko victory seems to leave more questions about her presidency. Would she create an autocratic government that resembling her father’s? Would corruption continue in Peruvian institutions during her administration, or even grow? Would she be as willing to use excessive force to combat security threats?

The JEE’s decision on Keiko’s candidacy has been crucial. Her candidacy status is intact. She is still in the running. Yet the outcry against her popularity rallies crowds to demonstrate against her campaign. New developments surface daily. The outcome of the presidential election is unpredictable, and a possible Keiko victory cannot be discounted.

By Stephan Horler, Research Associate at the Council on Hemispheric Affairs