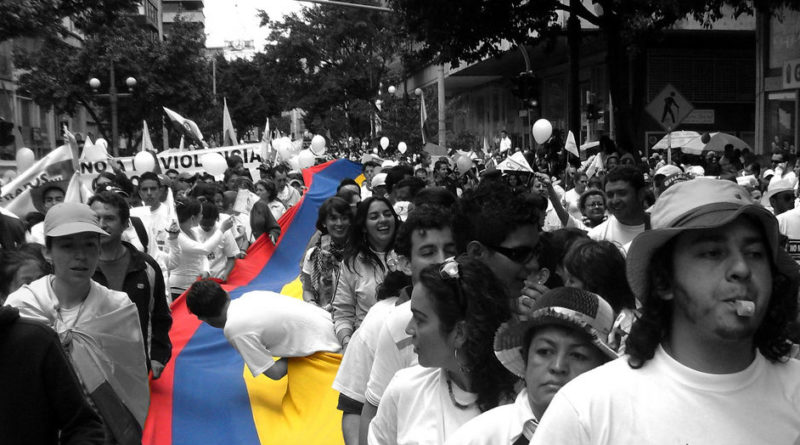 Following La Violencia—Colombia’s infamous civil war lasting from 1948 to 1958—the polarization of the country’s political parties and ideological factions has led to a continuation of violence throughout Colombia. The left-wing Revolutionary Armed Forces of Colombia (Fuerzas Armadas Revolucionarias de Colombia, FARC) were initially formed as an armed peasant movement in 1964 that demanded comprehensive land and social reforms. Since then, the government and right-wing paramilitaries have waged a violent conflict against the FARC in rural Colombia that has resulted in a total of 220,000 deaths and over 5.7 million displacements.[1]

Negotiations between the FARC and the Colombian government have been ongoing since 2012, but Wednesday marked President Santos’ first appearance at the peace talks, and the beginning of a more visible role as a major force for concluding the peace accord. The two sides have come to a series of agreements, including the creation of special tribunals to try former FARC combatants as well as government troops and rightist paramilitaries. Those found guilty of human rights violations will be required to pay reparations to their victims and will face a maximum sentence of eight years under special conditions, provided they cooperate with the judicial process;[2] those convicted of serious crimes who do not cooperate with authorities could face up to 20-year sentences. Those who sign the peace deal, accept responsibility, face charges and pay reparations will be safe from extradition if they are wanted by the United States on drug trafficking charges.[3]

Pressured into the peace talks by the Colombian public, Bogotá has spent billions of dollars on efforts to combat the FARC (the 2015 budget for armed forces and police is $12.2 billion),[4] while the United States has contributed over $9 billion for military operations since the birth of Plan Colombia in 2000.[5] Meanwhile, the FARC have suffered from sharply diminishing membership numbers (16,000 in 2001 to 7,000 in 2013) over the past decade and a half.[6]

The FARC recently demanded an inclusion of right-wing paramilitary groups in the current peace talks.[7] This step was agreed to by President Santos on Wednesday.[8] Previous administrations have attempted to implement comprehensive demobilization and reinsertion programs with guerrilla groups but have failed due to the exclusion of paramilitary forces in the overall process. Previously, the Betancur administration (1982-1986) legalized guerrilla members that accepted the amnesty as political actors in 1985, and the FARC subsequently demobilized and established the Patriotic Union (Unión Patriótica, UP), their political party. However, over 3,000 UP members paid dearly for this, assassinated by paramilitaries.[9]

The situation changed with the election of President Álvaro Uribe (2002-2010), who refused to negotiate with the FARC and instead opted for supporting talks with the United Self-Defense Forces of Colombia (Autodefensas Unidas de Colombia, AUC), the largest paramilitary group in the country,[10] which has subsequently splintered off into several small criminal gangs.[11] Since the demobilization of the AUC under Uribe, however, Colombian diplomats had not engaged in peace talks with the FARC until 2012.

COHA is cautiously optimistic about the shift in character of the Colombian government that has allowed for the promise of peace in the country. However, insufficient funding, an inadequate monitoring of demobilized combatants, and a lack of consultation with host communities in the past have impeded Colombia from successfully maintaining peace. Although it has yet to be seen whether these agreements will prove to be successful in the long-term, President Santos’s government and the FARC have taken a crucial step toward sustainable peace in Colombia.