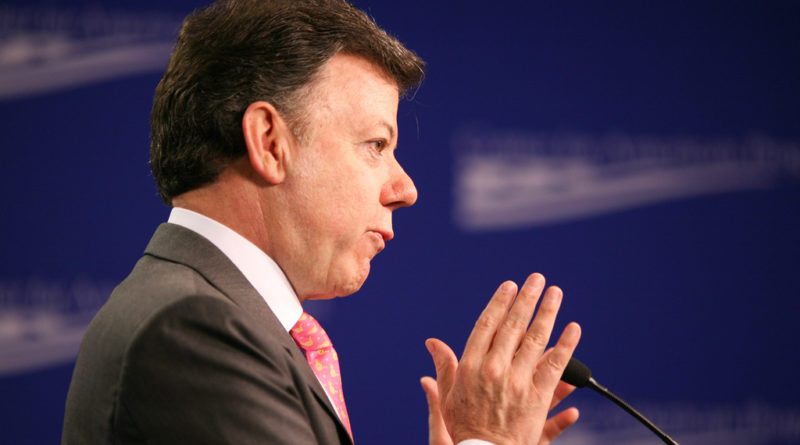 On October 7, 2016, the Nobel Peace Prize was awarded to Colombian President Juan Manuel Santos for his efforts to negotiate a peace agreement between the Colombian government and the leftist Fuerzas Armadas Revolucionarias de Colombia (FARC). Over the past four years, Santos has staked his presidency on these negotiations, with great hope of ending a conflict that has resulted in the displacement of 5.7 million people, the disappearance of 25,000 people, and over 220,000 deaths.[i] On August 24, the Colombian government and FARC representatives signed the agreement, bringing an end to the conflict. However, in a shocking turn, Colombian citizens voted against the accord on October 2 by the narrowest of margins. The timing of the Nobel Peace Prize Committee could not have been better and appears to give President Santos’ efforts to continue the Colombian Peace Process new momentum.

The past years have been filled with intense negotiations between Santos’ representatives and FARC leaders. The Colombian peace negotiation is one of the most complicated and tedious experiences Latin America has gone through. Facilitated by Cuba and Norway from the beginning, the peace talks started in 2012. Since then, major achievements have been celebrated. Among the most important sections of the peace agreement are sections addressing rural development and agrarian reform, political participation, illicit drugs, reparations to victims, ending the conflict, and implementation of the accord.[ii]

Despite all the hard work, the peace agreement suffered a strong blow when it was barely defeated in a national plebiscite. The final vote was 50.2 percent against and 48.8 percent in favor of the peace agreement, a margin of merely 60,000 votes.[iii] Additionally, the process suffered from extremely low voter turnout with less than 38 percent of participation, further complicating the significance of the plebiscite’s outcome. Moreover, in areas that polled strongly for “Yes,” Hurricane Matthew limited voters’ access to the polls.[iv] Lastly, the “No” campaign, led by former Colombian President Álvaro Uribe, was effective at driving down voter turnout by capitalizing on Colombians’ fears of the FARC and launching an effective smear campaign that called for harsh punishments against the guerillas.[v] In the end, the outcome of voting patterns was influenced by regional dynamics, including a sharp divide between rural and urban areas, affected and non-affected areas, and pre-existing political alignments.[vi]

Despite the adverse results, Santos has remained staunch in his commitment to achieving peace in Colombia, stating, “I will continue seeking peace until the last day of my presidency.”[vii] In fact, the President has set October 31 as a new deadline for the peace process’ completion. In the meantime, Santos has sat down with opposition leaders, including former Presidents Andrés Pastrana and Uribe to discuss their concerns with the agreement.[viii] Santos also sent his representatives to continue talking with FARC leaders in Havana. Although the outcome of the vote did not ratify the accord, both the Colombian government and FARC plan to keep the peace process moving forward and the ceasefire intact.

What does this prestigious award mean for Colombia?

Although the agreement seemed headed toward defeat after Sunday’s electoral results, awarding the Nobel Peace Prize to Santos appears to have revitalized the peace process. In a joint communiqué released earlier today, President Santos and the FARC leadership reasserted that the peace process will continue to move forward and the final agreement signed on August 24 will be maintained.

What becomes clear is that the Nobel Prize has strengthened the hand of those political actors that supported the Peace Accord in several ways. First, the prestige of this award gives Santos more political capital at a crucial time. After winning the Nobel Peace Prize, Santos should be more respected and supported throughout the revision process. His newfound prestige will elevate the power of his position in the renegotiation process with members of the “No” campaign, as his actions have been formally recognized as an inspiration for peace. If the opposition continues to hinder the process, they risk being shamed for publically opposing the Nobel Peace Prize recipient and rejecting international standards of peace promotion. The weight of this award also gives the peace process more international support. This is crucial because the accord required strong support from the United Nations (UN), specifically for on-the-ground “monitoring, verification, and resolution of differences.”[ix] International actors are less likely to pull support and will be more inclined to back a Nobel Peace Prize laureate.

In addition to international support, the Nobel Peace Prize is likely to increase domestic support for the process. Santos has become a source of national pride as one of only two Colombians to ever be awarded a Nobel Prize. It is also possible that many people who are still uncertain about the agreement may be swayed to support it. Interestingly, it will also likely improve the international reputation of FARC, because the organization has been an active partner in achieving the peace accord. As Santos’ partner in mobilizing support for the Peace Accord, the award is likely to grant the FARC a legitimacy that it has not recently had as a political actor. On the other hand, the fact that Uribe’s primary political rival was granted the Nobel Peace Prize is likely to weaken his political position and force him soften his opposition to preserve his reputation. Should he continue to oppose a Colombian Nobel laureate, Uribe runs the risk of being sequestered on the international and domestic stages.

[v] Idler, Annette. “Colombia Just Voted No on Its Plebiscite for Peace. Here’s Why and What It Means.” Washington Post. October 3, 2016. Accessed October 07, 2016. https://www.washingtonpost.com/news/monkey-cage/wp/2016/10/03/colombia-just-voted-no-on-its-referendum-for-peace-heres-why-and-what-it-means/.

[ix] “Joint Communique #2: Meeting of the Delegations of the National Government and the FARC-EP.” FARC-EP International. October 7, 2016. Accessed October 07, 2016. https://farc-epeace.org/communiques/joint-communiques/item/1726-meeting-of-the-delegations-of-the-national-government-and-the-farc-ep.html.