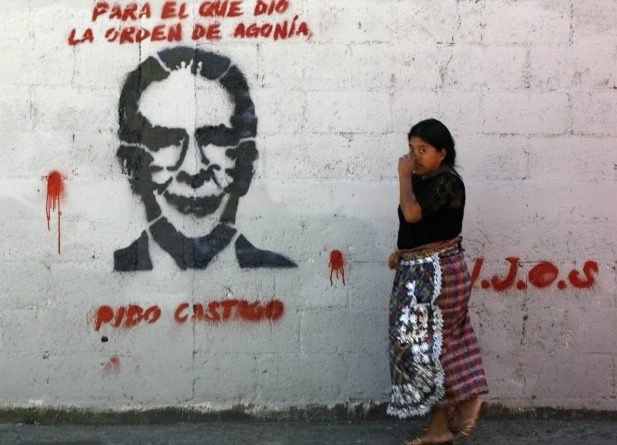 Guatemalans turned their attention to the prosecution of war crimes and human rights violations once more, as citizens criticized President Perez Molina’s administration for the dismissal of at least 17 research technicians employed by the Dirección del Archivo de la Paz (DAP), a governmental institution created to amass and digitize key documents. The government’s actions hint at plans to effectively eliminate any chance of identifying abuses committed during Guatemala’s bloody civil war, which lasted from 1960 to 1996.

The Guatemalan government established the DAP in 2008 as an extension of the Secretaria de la Paz (Sepaz) and in congruence with the 1996 Peace Accords that ended the civil war.(1) Reforms in 2009, however, significantly extended the reach of the organization, enabling specialists to explore beyond the archives of the Guatemalan Department of Defense and begin investigations apposite to the human rights violations at hand.(2)

According to a petition released by the Guatemala Human Rights Commission arguing against the dissolution of the DAP, “investigative researchers [for DAP] and their reports have provided key evidence for human rights prosecutions, such as the military chain of command when the army committed massacres, torture and forced disappearances.”(3) Moreover, the DAP has played an integral role in the prosecution of cases, such as that of former dictator Efraín Ríos Montt regarding his “scorched earth” campaign. Earlier this year, several investigators examined past documents and atrocities, ultimately concluding that Rios Montt had ordered the massacre of 800 people during his time as dictator.(4) Without the testimony of DAP researchers, Ríos Montt’s genocidal tactics against Guatemalan indigenous communities would have certainly evaded a proper trial.(5) To this extent, the DAP becomes an advocate of human rights observance in Guatemala, especially to those personnel blighted by the horrors of the decades-old civil war.

The Perez Molina administration has yet to provide ample justification for termination of the institution and its comments on the future of the DAP differ significantly. Pérez Molina stated, “I assure you all that the archives [DAP] will continue to be vigilant, and fulfill its duties as described in the Peace Accords signed in 1996.”(6) On the contrary, Secretary of Peace Antonio Arenales Forno hinted at the dissolution of the DAP: “As of today, we have decided to eliminate DAP, canceling contracts … and a directory of archives that, in my opinion, lacks any relative function.”(7) Due to the government’s varied perspectives on the DAP reforms, several Guatemalan news media sources, such as Plaza Pública and Prensa Libre, remain skeptical of the administration’s true plans for the agency. They express a discomforting uncertainty regarding the archives’ final destination. Furthermore, reporters continue to question officials’ claims of a surplus of government employees.(8) The investigations into the president’s motives behind the dismissal of these technicians could jeopardize his impunity.

Given many officials’ controversial military past, the Perez Molina administration might have ulterior motives in reducing the DAP’s power. Molina served as a military officer during the civil war as a part of the notorious Kaibiles group, infamous for its brutal tactics. In fact, their “training included killing animals and then eating them raw and drinking their blood in order to demonstrate courage.”(9) Despite statements from humanitarian groups, activists, and indigenous organizations, the justice system has not yet conclusively proved Perez Molina’s involvement in war atrocities.(10)

The U.S. National Security Archives at George Washington University hold declassified documents with evidence that incriminates the president. After General Ríos Montt’s trial, perhaps President Pérez Molina fears the possibility of further investigations that might incriminate him. In fact, with the decision to close the DAP, he seems to be trying to circumvent the law with this preventive action. Nonetheless, he insists that he would “be respectful of the law [because] here no one can be above the law” and that “justice has to take its course. The president cannot decide the law or rule on any of these cases.”(11)

Be that as it may, Guatemala has a history of impunity regarding the domestic conflicts that the nation has endured. The country has failed to develop a strong judicial system that is capable of prosecuting atrocities. Thus, the DAP’s dissolution would only exacerbate the inefficiency of Guatemala´s judicial system. To make matters worse, once closed down, prosecutors cannot use the DAP’s documents as evidence against human rights violations in court.(12) Governmental officials argue that the Truth Commission is biased and excessively blames the army for acts committed during the civil war. However, the focus on the army´s role is completely legitimate. According to the United Nations, 93 percent of human rights violations arise from the state’s armed forces.(13) As a result, governmental declarations seem out of proportion and inaccurate. If the elected government is unwilling to do away with impunity, the cases should be referred to the Inter-American Court of Human Rights (IACHR). This court prosecuted Guatemala’s government for the Myrna Mack Chang case in 2003 and the Plan de Sánchez Massacre in 2004. Despite being criticized by several governments, such as those of Venezuela and Peru, the IACHR has effectively tried several human rights violations

When approached about the subject, Kate Doyle, senior analyst of the Guatemala Documentation Project at the National Security Archive, said, “The state of Guatemala has systematically hidden the information in its power about the internal armed conflict. … This policy of silence has survived the peace accords; it has survived the Historical Clarification Commission; and it continues today.”(14)

Unfortunately, the Guatemalan government has decided to rewrite the country’s history of human rights violations, a dangerous agenda that promotes impunity and historical amnesia. The executive branch aims in this regard to incapacitate the justice system, marring the institutions that might secure human rights, with citizens left powerless in the face of those who ought to protect them.