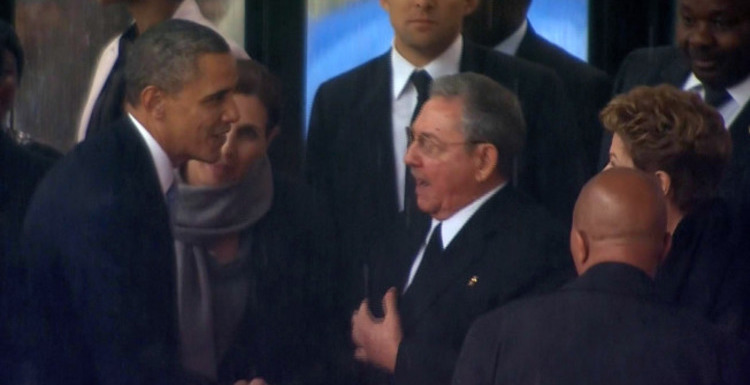 At the end of the day, as the world mourns the loss of  the irreplaceable Nelson Mandela, many prominent political figures and social activists are recalling out loud how the life of the great South African leader motivated thousands to emulate his accomplishments in terms of liberation and freedom. One of those leading political figures who conceivably could have done something about it was President Obama, who recently stated “I am one of the countless millions who drew inspiration from Nelson Mandela’s life. My very first political action, the first thing I ever did that involved an issue or a policy or politics, was a protest against apartheid.” [1] Nevertheless, that inspiration appears to have gradually atrophied in recent years as Obama has failed to follow in Mandela’s footsteps, particularly in Obama’s stance on Cuba. In fact, there is a political and moral gulf between the praxis of these two individuals. Unbeknownst to many, Fidel Castro and Nelson Mandela had formed a very close relationship. The strength of this powerful partnership is described by Mandela in a speech he delivered in Cuba in 1991, in which he stated, “The Cuban people hold a special place in the hearts of the people of Africa. The Cuban internationalists have made a contribution to African independence, freedom, and justice, unparalleled for its principled and selfless character.” [2] Obama could have learned several key lessons from these ties and improved Washington’s  relationship with Havana.

Concrete progressive and symbolic initiatives in U.S.-Cuban relations are needed, particularly as the Russian Federation takes the lead in improving the quality of its rhetoric and practice towards Cuba, as well as expanding its influence throughout the Caribbean. Case in point of this is that, while Obama and Castro shook hands for less than 10 seconds in South Africa, it was recently revealed that Moscow has pardoned 90 percent of Cuba’s debt. The debt has been drastically reduced from $32 billion USD to $3.2 billion USD, which Cuba will now have a decade to pay. The United States has never taken such a generous or grandiose action.

Castro and Mandela: Brothers in Arms

The alliance between Cuba and South Africa was forged during the embittered peak of the Cold War. As early as the 1960s, Che Guevara aided the liberation movement in Congo; in the 70s, Cuba defended Agostinho Neto’s Movement for the Liberation of Angola (MPLA), and Cuba’s support for the MPLA continued well into the 80s. [3] The extent to which Cuba fought against the apartheid movement in South Africa is impressive. In 1977, under Fidel Castro’s leadership, Cuba began training members of the African National Congress (ANC) in guerilla tactics. [4] That same year, Cuba established a school for South African youths and other refugees.  By 1999, around 28,000 African students had graduated from various educational institutions in Cuba and 76,000 Cuban nationals had been deployed in Africa. [5] Castro justified intervention in that region in the name of solidarity and internacionalismo. Cuba’s Afro-descendant roots go deep. During the hateful years that Cuba was a colony, it was home for one million African slaves, many of whom would later fight for Cuba’s independence at the end of the 19th century. [6] Cuba was part of the international movement that secured Mandela’s freedom in 1990, and upon his release Fidel Castro invited Mandela to Cuba where he expressed his gratitude and admiration to the Cuban leader. [7]

The U.S. embargo against Cuba has lasted over 53 years and there is little hope that it will abate in the near future. Nevertheless, President Obama has taken several small steps to ease tensions between both countries by increasing “people-to-people contact.” [8] Starting in 2009, the Obama administration announced that it would lift restrictions on remittances to family members in Cuba, lift transaction restrictions related to the travel of family members to the island, and allow telecommunication providers to establish fiber-optic facilities connecting the United States to the Caribbean nation. [9] Despite these new policies adopted by the U.S., Cuba’s foreign minister, Bruno Rodriguez, stated it was not enough; in order to improve relations the U.S. needed to end the embargo, remove Cuba from its list of state supporters of terrorism, and end support for “internal dissident movements on the island.” [10] However, new events may indicate that change is coming, however unlikely that may prove to be.

In Johannesburg on Tuesday, in the course of  Nelson Mandela’s memorial service, video taken by the press shows President Barack Obama giving a friendly handshake coupled with a few words to Cuban President Raúl Castro as he made his way to the podium to deliver his speech. This handshake, which comes after half a century of hostility between the two countries, is the second time ever that a US president has shaken hands with a Communist Cuban leader. [11] The first time this took place was at a United Nations summit in New York between Raúl Castro’s late brother Fidel Castro and Former President Bill Clinton in 2000.[12]

With this gesture, a few questions arise: Will the economic embargo, which was placed on Cuba in 1962, finally be lifted? Will further diplomatic efforts on the part of the U.S. aimed at isolating the country be terminated? Are Cuba’s most recent steps to gradually open its economic policies proving to change obstinate U.S. political opinion regarding the island nation? And finally, can we assume that this is a symbolic gateway signifying Cuba’s entrance into the world arena as a de-stigmatized world player?

Progress as a result of the gesture seems unlikely. The Clinton handshake led not to a rapprochement with Cuba, but to a further tightening of sanctions; can we expect anything different from Obama? So far, Obama has not demonstrated anything like Mandela’s political courage. In response to the hand of reconciliation from our Cuban neighbors, Obama wields the stick of embargo and alienation.  In practice, Obama stands with the hard liners with an increasingly ingenuous rhetoric about human rights and democracy.

As Obama takes the road of indecision on Cuba, Russia has exhibited a decisive stance in helping Cuba to regain its international financial standing. On Tuesday, the same day when President Castro and President Obama shook hands in Mandela’s ceremony, Russian and Cuban diplomats declared that a new deal had been made between the two countries regarding Cuba’s debt.

As previously cited, the Cuban debt, which dates back to the 1980s when the country received major amounts of financial assistance form the now-defunct Soviet Union, amounted to a huge $32 billion USD. According to reports, Moscow and Havana have been discussing a new debt deal since as early as February, when Russian Prime Minister Dmitry Medvedev visited the Caribbean island. From what is known so far, the current debt of $3.2 billion will now be paid over the next ten years. This means that Havana will have to pay Moscow $320 million per year. This is still no small amount, but is certainly more manageable.

This move should not be interpreted as Russia trying to become Cuba’s major financial benefactor, but it will be interesting to see what other initiatives appear in the near future between the two states. The theory that Russia is slowly making a comeback and increasing again its influence in Latin America and the Caribbean may no longer be just an opportunity for hyperbole.

A shift in U.S. policy in a constructive direction would well honor the memory of Nelson Mandela, whose living presence permeated the event. Cuba has been transforming itself root and bough from a heavy handed bureaucratic society devoid of creativity, and seems to be catching on to any change of direction that the U.S. diplomatic compass would decide upon. Liberals have been looking for a progressive dividend from the Obama administration. This is yet another opportunity for the U.S. president to repudiate the sterility of a policy that has been renounced by almost every nation in the world, Russia included. Let us hope that he seizes it.

[3] South African History Online: Towards a people’s history, “Cuba and the struggle for democracy in South Africa.” Accessed December 6, 2013. http://www.sahistory.org.za/topic/cuba-and-struggle-democracy-south-africa.

[9] U.S. The White House. Fact Sheet: Reaching out to the Cuban People. Revised. Office of the Press Secretary, April 13, 2009. http://www.whitehouse.gov/the_press_office/Fact-Sheet-Reaching-out-to-the-Cuban-people