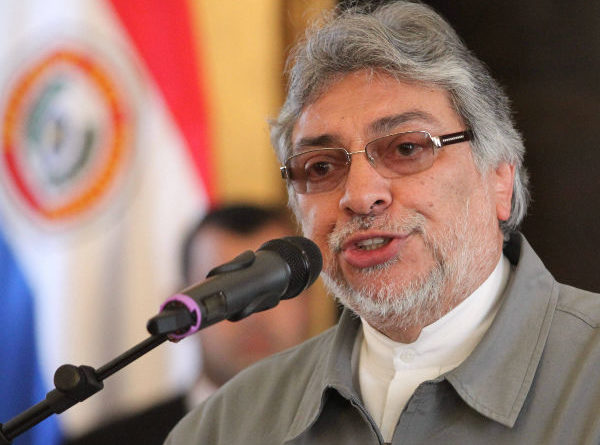 The Paraguayan lower house impeached President Fernando Lugo this morning in a vote of 76 to 1. The vote came six days after a land conflict in the rural district of Curugauty turned violent, claiming the lives of 11 landless farmers and 6 policemen. Paraguay is the world’s fifth largest soy exporter and a major exporter of beef. The country also has one of the world’s most unequal land distributions. While development experts agree that land reform is vital to improve the country’s economic and social performance, traditional landed elites make up a majority of the political class and have remained hostile to the idea. Polarizing land conflicts pit landless peasant organizations against the traditional landed elite and the Brazilian-dominated soy industry in a struggle to claim ownership over land with unclear or absent titles.

Land-owners accuse Lugo’s government of sympathizing with land invasions, inciting violence, and failing to protect their property. Lugo came to power in 2008, marking the first democratic change of power in the country’s history and ending 60 years of one-party rule in Paraguay. He was elected on a promise to bring about the political change and social progress desired by his ideological supporters in leftist parties and political movements, including peasant organizations. However, the bulk of Lugo’s electoral support came from the Liberal Party, which is dominated by landed elites. The Liberals threw their support behind Lugo in exchange for the Vice-Presidential nomination, the promise of multiple ministerial appointments, and the prospect of removing their traditional rivals, the Colorado Party, from power.

Lugo’s rule was compromised from the start, after the elections granted the President’s leftist allies only 6 out of 80 seats in the country’s lower house and 3 of 45  seats in the Senate. Furthermore, the Colorado Party received pluralities in both houses, setting the stage for the series of unstable and ideologically incoherent legislative coalitions that have presided over the legislature during Lugo’s presidency. Political maneuvering, rather than public policy, has occupied much of the legislature’s energy, and, under these conditions, little progress has been made on land reform and the economic and social demands of the country’s citizens.

The massacre in Curuguaty provided the impetus to unite the soybean-farming and land-owning interests within the rival Colorado and Liberal Parties against Lugo. These groups blamed Carlos Filizzola, Lugo´s Minister of Interior, for the death of the policemen and threatened Lugo with road blocks and impeachment unless the President named a new official who was committed to securing the countryside. Lugo replaced Fillizola, a member of the left-leaning Partido País Solidario, with Rubén Candia Amarilla, a Colorado Party Member who held the post of Attorney General in the last Colorado government and was associated with the repression of landless peasant organizations.

Following Filizolla´s dismissal on June 16, Lugo’s government quickly lost its grip on power. Today the Liberal Party withdrew its support from the government and asked its members to resign their posts. The country’s Minister’s of Education, Agriculture, Industry and Trade, and Justice and Labor resigned today following the announcement. Meanwhile Liberal legislators collaborated with the Colorado party to begin impeachment proceedings in the Paraguayan congress. The Paraguayan constitution permits impeachment of the president for “poor performance of his functions, crimes committed in his duties and common crimes,” but provides no specific criteria for impeachment. This morning, the lower house approved an accusation of impeachment offenses by a vote of 76 to 1, citing insecurity and national security threats as their principle motivation.  The impeachment trial must now be carried out by the senate, where the Liberals, Colorados, and the opposition UNACE party will easily reach the supermajority needed to impeach the president.  The senate vote will occur by the end of the day on Friday.

Meanwhile, peasant organizations have announced their support for Lugo and begun to mobilize their members to the capital. Thousands of peasants are set to arrive in Asuncion this evening and occupy the legislative plaza along with members of the leftist social organizations that supported Lugo’s candidacy and hoped to gain a foothold on power during his government. Impeachment supporters have also taken to the Plaza, creating a potentially explosive environment, as the opposing groups attempt to put popular pressure on the Senate. Past responses to social protest in Paraguay have set a violent precedent. In March 1999, peasant-organized protests blocked an attempted coup by General Lino César Oviedo but resulted in the shooting of six demonstrators.

These developments come nine months before Paraguay´s general elections and following a novel wave of political organizing and protest by urban and youth groups, modeled after the occupy movement in the U.S. Thousands of protestors occupied the plaza last month demanding greater accountability from Congress and demanding that they reject plans to fund 10,000 patronage hires at a cost of US$15 million. This expression of citizen´s opposition triggered an about face in the senate and emboldened Paraguay´s occupiers to press for further electoral reforms. The political crisis unleashed by the impeachment trial has upset their plans and divided their ranks. While, Paraguay´s occupiers are united in their disdain for Paraguay´s political class, they hold mixed attitudes toward Lugo and are not natural allies of the President´s rural supporters.

Thus, the optimism that followed such sudden and unexpected gains by social protesters has been replaced by ambivalence deep political uncertainty that is unlikely to be resolved soon. Should the impeachment succeed, Liberal Vice President, Federico Franco, will assume the presidency, and a new Vice President will be chosen by majorities of both houses. The parties must then negotiate with the new president to claim the vacant Ministerial posts, a valuable prize and source of patronage during the electoral season. Should Lugo´s allies succeed in defending his government, the president must finish his term with a tenuous grip on power and in a weak position to name his successor.