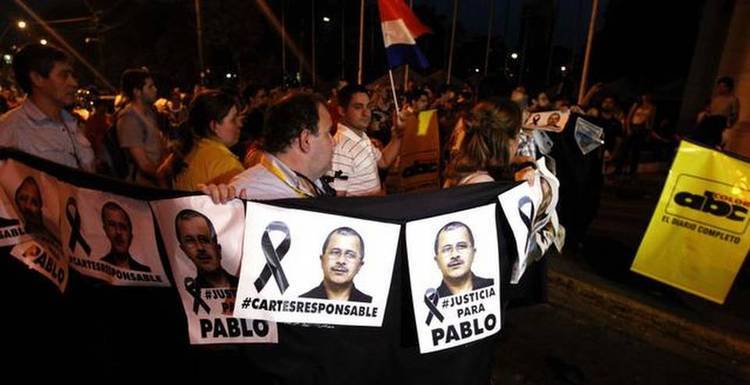 By: Louise Højen, Research Associate for the Council on Hemispheric Affairs.

In the northeastern Canindeyú Department of Paraguay, near the Brazilian border, journalists have found themselves in great peril. Pablo Medina is the third journalist this year to be murdered amidst a milieu of drug cartels and corrupt officials.

Medina, 53, a regional correspondent for the Paraguayan daily ABC Color since 1998, was shot dead in an ambush on Thursday, October 16. His 19-year old assistant, Antonia Almeda, was critically injured and passed away en route to the hospital. They were set up while driving after covering a story in the colony Ko’ë Porä in the area of Villa Ygatimí; two men stopped their vehicle and shot them in cold blood.[1] Four male suspects were soon detained, but so far the identity of the killers is unknown and there has been no trials. The recent murders are just one aspect of the suffering mainly brought on by the drug traffickers who haunt the entire Canindeyú Department, throughout districts and towns like Curuguaty, Villa Ygatimí, Ypehû, and Yasy Cañy.[2]

Pablo Medina was a dedicated investigative journalist who denounced drug crimes and illegal logging in the Canindeyú Department. His colleagues of ABC Color recognized him for his passionate journalistic work as was noted in an obituary written on October 17. This column highlighted his efforts to expose crimes in Canindeyú, primarily motivated by the murder in 2001 of his brother, radio journalist Salvador Medina, after he had criticized timber smugglers in the region.[3] Medina himself was also exposed to several death threats in the recent past, culminating in the assignment of a police escort by the authorities. However, his police security was withdrawn in September 2013, though he still faced grave danger.[4] Despite the constant insecurity that haunts the daily life of Paraguayan investigative journalists, they persistently fight for press freedom. They fearlessly put out articles that expose plantation sites where illegal marihuana is cultured. This has led to several drug seizures and the arrest of a series of notorious criminals.[5]

Journalists and citizens are looking for answers and demanding justice to be upheld by their officials and the government. On the evening of Friday October 18, the citizens of Curuguaty showed their respect for Medina and Almeda in a mass caravan that made its way through the city, demanding “peace and justice” not only for them, but also for the victims of former killings and kidnappings across the crime-ridden zone.[6] Furthermore, Medina and Almeda’s murders have received both national and international condemnation as they represent continuous episodes of violence, repression of freedom of the press, and human rights violations in Paraguay.[7] Both the national and international community have offered their condolences to Medina’s mourning wife, three children, and family.[8]

The International Federation of Journalists (IFJ) supports the regional Federation of Journalists in Latin America and the Caribbean (FEPALC) in demanding that the Paraguayan government quickly find, try, and convict the murderers.[9] On October 20, the French organization Reporters Without Borders (RSF, Reporters Sans Frontières) issued a statement urging “the authorities to conduct an independent investigation in order to identify the perpetrators and masterminds of [these murders and] shed light on the reason why Medina was no longer under police protection, given that he was the target of constant threats.”[10] The RSF have also stressed the concerning lack of press freedom in Paraguay as the country ranked 105 out of 180 countries in the 2014 World Press Freedom Index.[11]

President Horacio Cartes was quick to respond to this genuine threat to his administration’s already impaired reputation, and on October 16, he condemned the killings of Medina and Almeda, labeling them as an attack on free speech. “Our government regrets and condemns this murder that not only threatens the peace of our country, but is also a direct violation of human rights and an attack on freedom of expression in our country,” Cartes stated.[12]

The future continues to looks grim in Canindeyú. Regardless of the numerous concerned voices since the latest deaths, the Minister for the National Anti-Drug Secretariat, Luis Rojas, has admitted that the capacity to combat Paraguay’s large-scale drug trade is simply beyond control. Despite the severity of conditions in Curuguaty, only eight Secretariat agents are active there. He promised a broader national coverage after Medina’s death, but with only 231 agents in the Secretariat, this appears to be an impossible task, especially since he also admitted that drug trade is turning into a national industry.[13]

Even more disconcerting is the suspected involvement of the Mayor of Ypehu, Vilmar Acosta Marqués, in the killings. He is accused of being the mastermind in the planning behind the events, and he is currently a fugitive in Paraguay. Theories claim that he has crossed the Northeastern border into Brazil where drug cartels are now protecting him.[14] This infiltration of government circles may go even deeper. Current congressional Representative Cristina Villaba was accused of having a more profound affiliation with drug cartels a few years ago, and she is currently the protector and political godmother to Marqués in Ypehu, raising renewed questions about her involvement with criminals.[15]

The General Secretary of the Journalists Union of Paraguay, Santiago Ortíz, has lambasted Paraguay for being run by drug politics, accusations launched after a group of journalists met with the Minister for Internal Affairs, Francisco de Vargas, on Saturday, October 19. They demanded clarifications for the alleged involvement of several governing parties in drug trafficking, which was uncovered by the news agency Última Hora. Even President Horacio Cartes is accused of being part of the complot.[16] However, some officials such as Minister of Finance, Javier Díaz Verón, did manage to step forward and demand the protection of Paraguayan journalists, and intensify the investigation into the murders.[17] Verón is sadly one of few officials to call for justice. Surprisingly, though, the Journalists Union of Paraguay has met yet again with Francisco de Vargas on Monday, October 2, where they agreed on the need for establishing a protection protocol for the endangered journalists. The authorities appear to be sitting on their hands; meanwhile, Vargas has joined with Verón in planting the seeds in an environment where investigative journalists seem to be, if belatedly, protected by the government. According to TeleSUR, Vargas stressed the important social function that journalists fulfill and the necessity of locating the killers of Medina and Almeda.[18]

Still, it would appear that the state until now has been somewhat removed from the search for clarification and justice in the matter of the murdered journalists this year, as their killers have not been apprehended or prosecuted. It must be acknowledged, however, that international condemnation has spread awareness about the rising intensity of the drug industry in Paraguay, the constraints on freedom of press, and the unsolved murders of Pablo Medina, his assistant Antonia Almeda, and two other journalists who also were killed this year, Edgar Pantaleón Fernández Fleitas and Fausto Gabriel Alcaraz. Yet, Paraguay is very much in need of foreign assistance to combat the drug cartels and to root out corrupt politicians. Many of the Andean countries have struggled for decades with combatting the drug industry, and in Paraguay’s own struggle, the country could possibly draw on the individual experiences of its regional counterparts. Furthermore, Paraguay could also request assistance from the international community, particularly from the United States who has been deeply involved in Colombia through its war on terror and war on drugs in that country.

Paraguay is heading towards what looks like a grim future driven by drug politics. To effectively arm oneself in this struggle, measures must be taken to reestablish peace and security, particularly in the Canindeyú Department. A tactic to manage the flow of drugs and the presence of drug cartels would be to deploy more security personnel in the most affected regions. Additionally, collaboration with Brazil on patrolling the borders would prevent the cartels from spreading their reach all too readily. Notwithstanding, Medina’s death clearly marks Paraguay as a country in very deep peril, as it struggles with drug production and trafficking, governmental corruption and suppression of press freedom. Today, politicians and drug cartels face a population that is increasingly angry about the country’s corruption, murders, and insecurity. Fundamental change in the government is vital, and it starts with the apprehension and prosecution of those who murdered Paraguay’s three journalists this year

In memory of Paraguayan journalists Edgar Pantaleón Fernández Fleitas, Fausto Gabriel Alcaraz, Pablo Medina, and all those who challenge the repression of freedom of press in Paraguay.

[16]TeleSUR. “A journalist and her assistant were murdered on Thursday, allegedly by a local politician who is wanted by police. Since the murder, an investigation has revealed links between many legislators and drug trafficking,” Oct. 20, 2014. Accessed Oct. 22, 2014: http://www.telesurtv.net/english/news/Paraguayan-Journalists-Union-Denounces-Narco-Politics-20141020-0077.html