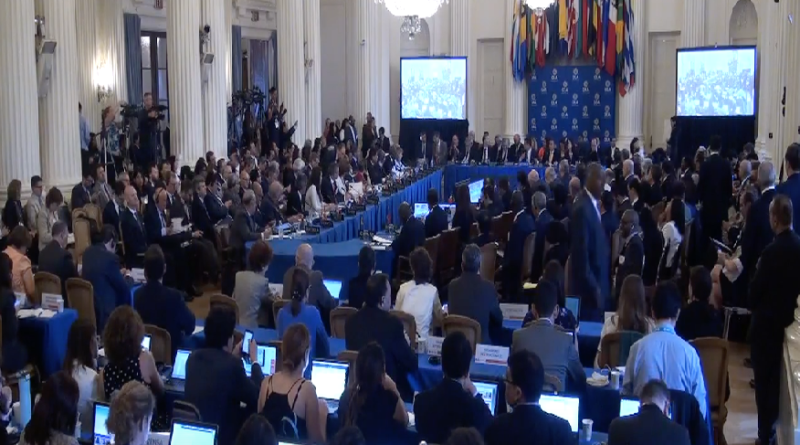 By Blake Burdge, Sheldon Birkett, and Liam Timmons, Research Associates at the Council on Hemispheric Affairs

On May 31, representatives from 33 of the 34 active members of the Organization of American States (OAS) met to discuss the current Venezuelan conflict at the 29th Meeting of Consultation of Ministers of Foreign Affairs. Absent was the representative from Venezuela, who was initially accounted for in the official OAS attendance list, but eventually did not attend.

The meeting was called for earlier last month following Venezuela’s April 27 move to withdraw from the OAS. The Venezuelan government states that the reasoning for its departure is that OAS Secretary General Luis Almagro, elected in 2016, has been too partisan regarding the current political crisis in Venezuela and that the US backed Almagro bloc in the OAS has taken an interventionist stance too-similar to that of the United States in the twentieth century, which was detrimental to Latin American sovereignty.

While two major resolutions were discussed by the representatives to the OAS, neither could muster sufficient support to pass. The first, led by an organization of Caribbean states (CARICOM) and backed by a number of pro-Venezuelan allies including Nicaragua, Bolivia, Ecuador, and El Salvador, urged Almagro to refrain from interventionist actions in Venezuela. The second, proposed by Argentina, Brazil, Canada, Chile, Colombia, Costa Rica, Honduras, Guatemala, Mexico, Panama, Paraguay, Peru, the US, and Uruguay condemned the proposed Venezuelan Constituent Assembly because of the concern that it would undermine Venezuelan democratic institutions. Neither position garnered sufficient votes to pass a resolution.  CARICOM countries, which formed a consensus prior to the meeting, ended up being a powerful policy broker on behalf of non-intervention and dialogue in Venezuela.

The Inter-American Charter has been invoked only twice in its history: once in Honduras and once in Venezuela. The invocation of the charter in Venezuela came during the 2002 short-lived coup against former President Hugo Chávez, with the OAS citing that the coup compromised democracy. After Chávez’s death, Almagro has tried unsuccessfully to invoke the charter twice more, stating that the Maduro government had undermined democratic processes, violating its own constitution as well as the OAS charter. The Maduro administration argues that the MUD has rejected participation in the December 10, 2017 regional elections as well as the presidential elections for 2018 and refuses to enter into dialogue. Almagro has been roundly criticized by a number of member states for not holding all Latin American countries to the same standards when using the Inter-American Charter.

Each of the member states that spoke at the meeting called for an open internal dialogue between the Venezuelan government and the opposition. The representatives of Nicaragua and Bolivia, staunch allies of Venezuela were outspokenly opposed to any form of US or OAS intervention. Most of the other speakers, who were supporting the US backed resolution, were more pointed in their opposition to recent actions taken by the Venezuelan government, with many, including the United States, urging Caracas to release its alleged political prisoners, to end the trial of civilians in military tribunals, and to clamp down on the violence against opposition protesters, with the Guatemalan representative calling for the OAS to be an “open space” for dialogue rather than an interventionist instrument.

The meeting concluded with the suspension of talks until June 19 in Cancún. Another notable absence from the meeting was US Secretary of State Rex Tillerson. The United States instead sent Under Secretary for Political Affairs Thomas Shannon to the meeting, signaling that the United States may be more inclined to promote internal dialogue over escalating confrontation. Under Secretary Shannon has significant experience in Latin America, including a term as Political Counselor to Venezuela and the US ambassadorship to Brazil; at the same time, Secretary Tillerson has struggled to answer some of the questions regarding Latin America and seems to take a much more aggressive stance toward Venezuela after having lost many of his assets in the country in 2007 while serving as the CEO of oil giant ExxonMobil.

Violence in Caracas is perpetuated by both government forces and opposition supporters confronting each other in bitter combat. Open and fair political dialogue should be encouraged, without threat of US intervention which only exacerbates already-elevated tension. The majority of Venezuelans want peace and decisive action to deal with the economic and political crisis without escalating violence.

By Blake Burdge, Sheldon Birkett, and Liam Timmons, Research Associates at the Council on Hemispheric Affairs