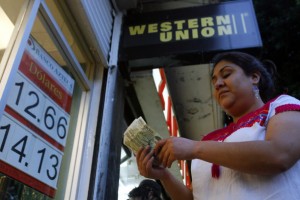 Inside houses held together by a collection of sticks, mud brick and plastic table cloths one can hear the hum of a stainless-steel refrigerator and the shrill buzz of a flickering thirty-inch color television set.  These appliances of modern convenience mix casually with poverty, a contrast almost obscenely commonplace throughout many parts of Latin America and especially Central America. Small towns in the campo, where unemployment seems to run close to  90 percent and the only males remaining are either below the age of sixteen or above the age of sixty, receive a steady stream of cash sent by former residents living more than a thousand miles away.

Remittances from family members working in the U.S. constitute a significant portion of the GDP in many Latin American countries.  In Haiti, remittances compose a record 30 percent of GDP, followed by Honduras (25.6%), Guyana (24.5%), Jamaica (18.5%), and El Salvador (18.2%).   As a whole, Latin America receives USD 58.9 billion every year, dwarfing both U.S. FDI (USD 19.2 billion, 17% of total) and foreign aid (USD 448 million) to the region combined.  While remittances do not ultimately solve economic deficiencies in these countries, many families rely on them to survive.  These payments also help families send their children to school, obtain better healthcare, and improve their homes.  Complementing direct cash payments to family members, cross border organizations, known as Home Town Associations (HTA), link immigrants to their home communities by creating communal funds to improve local infrastructure and undertake development projects.  Moreover, remittances create an even larger economic and social community throughout the Americas, held together by a circular flow of people and money.

To the north, some reports conclude that had it not been for an influx in immigrants, many of them undocumented, the workforce in all sectors of the U.S. economy would have shrunk by nearly one third throughout the 1990s. Concurrently, these immigrants spend 90 percent of their combined income of half a trillion dollars in the U.S., fostering growth in their new country of residence.  The remaining 10 percent of their earnings is sent back to their home countries, helping to sustain their own families. However, amid changing economic factors in the U.S., heightened border security, and development in certain parts of Latin America, this circular flow may be in an ongoing state of decline.

Two main economic factors in the U.S., the recession and currency devaluation, are largely responsible for the decline in remittances to Latin America.  At its highest point in 2008, USD 69.2 billion in remittances flowed into Latin America.  But in 2009, amid economic uncertainty in the U.S. following the global recession, the volume of remittances dropped by 15 percent to USD 58.8 billion.  While 2010 experienced a modest rise of USD 10 million, these gains, as well as those projected for 2011, are stunted by a weaker dollar.  The 2010 growth of 1.7 percent was in reality a 2.9 percent decline in local currency terms, meaning the value of earnings made in the U.S. relative to Latin America is waning.  When compared with the 3.9 percent world average recovery in local currency terms, the purchasing power of remittances to Latin America is trailing far behind.

In recent years, increased border security in the U.S has disrupted the cyclical flow of physical migration that facilitates the circular flow of money between the U.S. and Latin America.  In 1996, there were only 5,878 agents along the U.S.-Mexico border; by 2009 there were more than 16,000, a rise of 277 percent.  As a result, fees charged by coyotes, smugglers who help migrants bypass security checkpoints, have risen astronomically by nearly 715 percent, from USD 978 in 1995 to as high as USD 7,000 in 2010.  Crossing the border is now almost three times as expensive; coupled with insecurity from the drug war, the journey is significantly more dangerous than fifteen years ago.   These factors have changed how immigrants assess the risk of migrating to the U.S.  According to Wayne A. Cornelius, a scholar of comparative migration and professor of political science at University of California San Diego:

In the traditional pattern of Mexican migration to the U.S., most migrants were unaccompanied males who engaged in circular migration. Every 6-12 months they would rotate between working in the United States and returning to their hometown for extended stays.

Now, he states, “what used to be a two-way migration flow between Mexico and the United States…[is today] largely one-way, south-to-north flow.”  Migrants have been “bottled up” in the U.S. and as a result, those who leave are less firmly tied to supporting their families back home.  They are more concerned with starting a new life in the U.S. and enhancing their personal prosperity.  Consequently, these immigrants are less focused on sending their earnings back to Latin America.

A recent slowdown in remittances to Mexico and decline to Brazil can be attributed to strong economic growth relative to the U.S.  Mexico is the largest regional recipient of remittances at around USD 21 billion per annum.  However, at its peak in 2008, the nation received USD 25 billion and has been slow to recover, rising just slightly to USD 21.3 billion in 2010.  More economic opportunity in Mexico, especially for farmers, coupled with the risk associated with crossing the U.S. border has greatly reduced the tide of Mexican emigration and hence the stream of remittances.  In Brazil, strong performance during the global recession encouraged many of its citizens to return home and as a result, in 2009 remittances dropped by 34 percent.  Even in 2010, as the flow rebounded slightly in many other Latin American countries, remittances continued to fall by 15 percent, alluding to dynamism in Brazil and stagnation in the U.S.

Remittances have always provided a strong link between families separated by thousands of miles and a restrictive border.  They empower communities with little economic opportunity to prosper.  However, the circular nature of remittances and investment may be in jeopardy as factors within both the U.S. and Latin America begin to change. The circular system could become increasingly one-directional, excluding those still living in acute poverty from the benefits accrued by migrants working in the U.S.  This development could signify a transformation; as the allure and accessibility of economic opportunity in the U.S. begins to wane, Latin Americans stay within their home countries, fostering a growth independent of the North.

This is the fourth part in a series that covers immigration throughout the hemisphere from a variety of different perspectives.