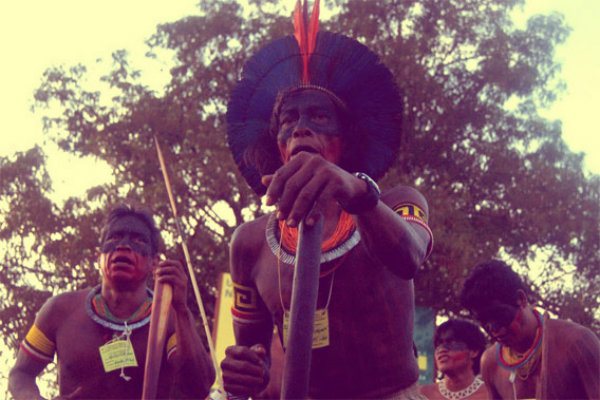 In the last two years, media outlets have reported the actions of the so-called “Occupy” movement that began on Wall Street and subsequently spread across the globe. Beyond the individual episodes, occupying has nowadays become a way of life to raise voices against social and economic inequalities and injustices all over the world. Brazil is not an exception, nor is the phenomenon likely to disappear soon.

On June 3, 2013, the website of the Italian newspaper La Stampa included a piece titled “Occupy Mato Grosso—La Protesta Degli Indios Brasiliani” (“Occupy Mato Grosso—The Protest of Brazilian Indigenous Peoples”). But what is this protest about? Which injustices are the Brazilian Mato Grosso experiencing today?

Mato Grosso, geographically the third largest state of Brazil, is located in the western part of the country on the border of Bolivia and in close proximity to Paraguay. It is thus an important cultural and economic crossroads in the heart of South America.

Apart from its political value, Mato Grosso is a unique site from an environmental point of view; it is home to three distinct ecosystems. One of these, the Pantanal, is characterized by an extraordinary biosphere considered to be the wettest area in the world. UNESCO named this area a World Heritage Site in 2000.

This is a precious land, both for the Brazilian government and for Brazilian indigenous peoples. Brazilian authorities attach great importance to the Pantanal due to its economic value as one of the largest regions of soy production in both Brazil and the entire world. Meanwhile, the indigenous populations of Mato Grosso have always considered this area as a strongly symbolic place, where spiritual nature and mother earth are represented. The country’s agricultural interests and traditional values have now come into growing conflict.

On May 31, 2013, approximately 80 Terena indigenous peoples occupied a 4,800-hectare fazenda (the typical Brazilian large landed estate) called Esperança, which is located in the Taunay district, near Aquidauana. Armed with bows and arrows, these Brazilian indigenous peoples claimed lands that originally belonged to their ancestors. According to the Brazilian newspaper, O Pantaneiro, the indigenous peoples occupied the access road to the property and gave the owners 24 hours to leave the estate. The occupiers were men, women, and even children. [1] Although they were unable to involve all the Terena villages, their actions raised concern for the owners of other fazendas.

What happened in Aquidauana was not an isolated incident. On May 15, 2013, almost 100 Terena indigenous peoples invaded another fazenda, Buriti, in the Sidrolandia region in southern Mato Grosso.

Occupations and Violence: Clashes with the Police

The hostility between indigenous peoples and fazenderos has quickly escalated in recent months from being related solely to land ownership to being fraught with other tensions. This was the case when the occupation of the Buriti fazenda in Sidrolandia turned into a violent confrontation between the indigenous people and the police.

Early in the morning of May 30, military and federal police burst into the Buriti fazenda in an attempt to disperse the occupiers, killing one and wounding at least four. According to a Brazilian deputy closely linked to the indigenous leadership, 35-year-old Oziel Gabriel died after being wounded in his chest. [2]

Terena indigenous peoples and police then clashed as agents from Gigcoe (a Special Operations Unit) and the Federal Police used flash bombs and rubber bullets against the occupiers who were armed with only pieces of wood and stone. [3] Police spokesperson Francisco Moraes tried to justify the violence by asserting that the indigenous peoples attacked policemen with bows and arrows.

The land claim put forward by the Terenas peoples originates from the ambiguous regulation of the indigenous communities in Brazil, especially in the Mato Grosso region. The Conselho Indigenista Misionario (Indigenous Missionary Council—CIMI), a Catholic organization that works with the indigenous populations, has expressed support for Terenas land occupations. CIMI cites a study by the federal agency for indigenous policies, Fundação Nacional do Indio (National Indian Foundation–FUNAI), which asserts that 33 thousand hectares in Mato Grosso should be recognized as terra indígena tradicional (traditional indigenous land). [4] This land should therefore be recognized as part of the Taunay/Ipegue reserve, but at present the protected area is limited to only six thousand hectares. The FUNAI report bolsters the indigenous struggle to enlarge the Taunay/Ipegue reserve. In this sense, it would seem that the land issue of the Terena peoples could be easily solved.

The Indigenous Community and the Brazilian Government: Dialogue vs. Economic Interests

The indigenous issue has become a hot topic for the Brazilian government. The conflict between the rights of fazendaowners and the claims of indigenous peoples is becoming explosive. While authorities have tried to balance the interests of the different parties, a solution has not yet been found. In particular, the strategy used since the Luiz Inácio da Silva Lula presidency (2003–2011) has been to seek a dialogue with the indigenous peoples. But, neither Lula nor his successor, the current President Dilma Vana Rousseff Linhares, has found a way to balance these competing claims. The construction of the Belo Monte dam in Vitoria do Xingu, which is located in the southeastern state of Parà, provides an example of these conflicting interests.

In this case, we have on one hand a remarkable example of Brazilian infrastructure (the dam will become the third largest such structure in the world), and on the other hand the interests of indigenous communities. The group of about 150 indigenous peoples, which has been protesting since June 2012 against the construction of the dam, asks to at least be consulted about the environmental risks. The next step the government takes will make its stance more clear on this controversial issue. Right now, it remains suspended in limbo between an attempt to defend indigenous ancestral lands and to safeguard the status quo relating to powerful economic interests.