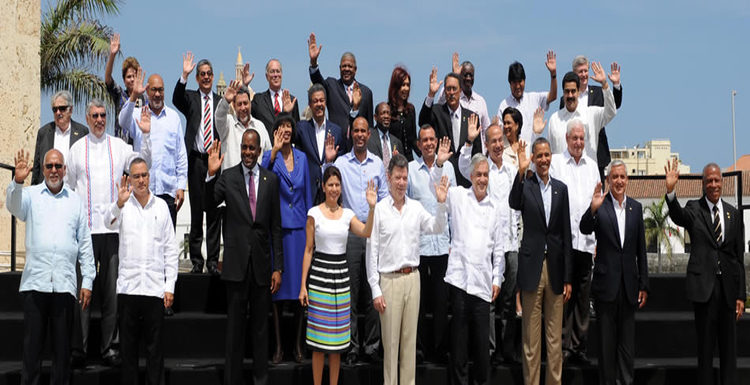 U.S. hemispheric policy reached a new low today when President Barack Obama invoked emergency powers to declare “a national emergency with respect to the unusual and extraordinary threat to the national security and foreign policy of the United States posed by the situation in Venezuela.” Thanks to Obama’s action, the U.S. has now blatantly rehabilitated its traditional imperial posture towards the South and challenged the continent-wide Bolivarian cause of Latin American and Caribbean independence and sovereignty. With such a reckless declaration, Washington has sent a green light to the ultra right opposition that was behind the anti-government violence in Venezuela during the first quarter of last year. This contravenes the current efforts of a delegation sent to Caracas by the Union of South American Nations (UNASUR) to maintain the peace, and thereby further alienates a region committed to defending their national sovereignty and independence from any power block on earth.

While Venezuela has identified the issue of corruption, is prosecuting a number of its security personnel for human rights abuses, acknowledges the need and is engaged in the reform of police training and practice, and is indeed in the midst of an economic crisis, Washington’s exceptionalism as applied to Venezuela, may raise more than some skepticism. For the U.S. continues to lumber aid to the regime in Honduras and Mexico, which have engaged in well documented systematic brutality and gross violations of human rights. While all human rights abuses merit attention and accountability wherever they occur, the Obama Administration’s selective indignation aimed at Caracas,and a complete lack of critique of the violent anti-government guarimbas (violent demonstrations) of the first quarter of last year, is bound to draw questions about the motives of U.S. hostilities towards Venezuela.

Does the Bolivarian cause in Venezuela threaten U.S. national security? Venezuela is not at war with any country on earth, has declared the region a zone of peace, and has been helping mediate the talks between Bogotá and the FARC in order to bring the longest running civil war in the hemisphere to a negotiated solution. The base of support for the Chavista government of President Nicolas Maduro are not terrorists bent on destroying Western civilization; they include the millions of formerly excluded and poor who now have proper nutrition, housing, access to health care, to a free education, and a voice in the governance of their country. Times are hard for them too, but they prefer the ballot box as the means of settling political differences, not violence. The grassroots movements behind the cooperatives and community councils as well as the numerous social movements that put people before profits are not our enemies. They do not ask for intervention from the North. They expect to be left alone to pursue their own organized expressions of constituent power. From a Bolivarian, rather than a Monroe perspective, it is up to Venezuelans to address their economic problems, to root out corruption and to continue implementing the police reforms in their country, just as it is up to the people of the United States to address human rights abuses from Ferguson to New York City.

Polls conducted in Venezuela show that the large majority of respondents oppose attempts at extra-constitutional regime change and prefer democratic procedures for resolving political differences. They also show that most Venezuelans oppose a U.S. invasion of their country. It is critically important to note that campaigns for legislative seats in Venezuela’s National Assembly are getting started and these elections, which include opposition candidates, do not pose a threat to U.S. citizens either. The Venezuelan Electoral Commission (CNE) has a solid record and is second to none. Both Chavistas and allied parties as well as opposition MUD and their allies are using the CNE to run their primaries. Allowing the Venezuelan legislative elections later this year to be held in peace, so that Venezuelans themselves, not an outside power, can decide who governs them, is a pro-democracy perspective. And the opposition can use the recall referendum in 2016 if they seek to try to recall Maduro by constitutional means.

Does the Bolivarian cause in Venezuela threaten U.S. foreign policy? Venezuela has been at the forefront of regional integration ever since Hugo Chavez was first elected president in 1998. Chavez argued that a necessary condition for any nation in the region to depart from the Washington Consensus and forge an alternative economic policy is the independence and sovereignty of the region from imperial domination. He also promoted the idea that in a multi-polar world, the region would be more likely to diversify its trade relationships, experiment with complementary types of commerce, and avoid political submission to any power block on the planet. These ideas have actually been put into practice, bringing about an epochal change over the past sixteen years, that has led to the formation of ALBA, UNASUR, MERCOSUR, CELAC and other associations of Latin American and Caribbean nations that do not include the U.S. or Canada.

The recent CELAC—China conference in January is an example of this exercise of independence and multi-polarity. But none of this poses a threat to the American people or the state. It does however, challenge one of Obama’s major policy goals, the Trans-Pacific Partnership trade deal. This free trade accord would be much easier to sell at the Summit of the Americas next month in Panama should the Maduro Administration be ousted in time. But that would be a crude calculation.

The people of the United States can benefit from a partnership with the new Latin America and Caribbean that complements each peoples’ needs and resources; but it must be based on mutual respect for sovereignty, and that means a U.S. policy that does not resort to “arm twisting” to impose free trade and neoliberal economic policies on our neighbors to the South. This would take a re-evaluation of the present overall U.S. hemispheric policy and an immediate step back from the precipice.