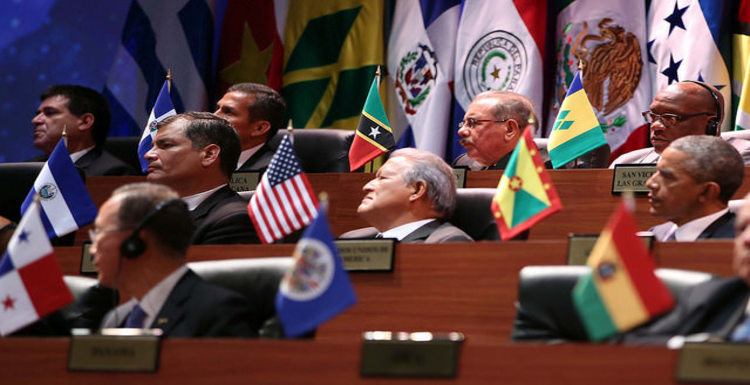 The Seventh Summit of the Americas (April 10 and 11, 2015) in Panama City, could express a turning point in the conflict between U.S. Monroeism and the continent wide Bolivarian popular resistance to re-colonization. The message coming North from both the plenary session and the parallel peoples summit was clear: ¡Ya Basta! (Enough is enough!). The region insists on its independence and its continued sovereignty from U.S. hegemony and has declared Latin America and the Caribbean a zone of peace. For this reason, President Barack Obama’s Executive Order of March 9, 2015, declaring the situation in Venezuela “an extraordinary threat to the national security and foreign policy of the United States,” overshadowed the official agenda of the plenary session, and in particular, the historic Obama—Castro handshake that was to signal a new page in U.S.—Latin American and Caribbean relations. It did not, however, blunt the victory of the overdue presence of Cuba at the Summit.

Obama’s Executive Order against Venezuela evoked a number of plenary speeches at the Summit that addressed the historic memory of imperial subjugation of the peoples of the Americas. The Order also drew attention to Washington’s backing of a golpista regime in Honduras (June 2009), and its ongoing support of the right wing opposition in Venezuela–all of this taking place during Obama’s watch. The letter to President Obama from the Committee of the Victims of Chorrillo, a town that was bombed during the U.S. invasion of Panama on December 20, 1989, was personally received for transmittal by President of Venezuela, Nicolas Maduro, on the first day of the Summit. Its content demonstrates that this and other episodes of lived history are, for many, still open wounds that call for accountability.

History was also very much on the minds of those who recall the April 11-13, 2002 short lived coup in Venezuela against the democratically elected government of then President Hugo Chavez, reversed by a popular uprising and loyalists in the armed forces. In Venezuela, since the death of Hugo Chavez in March 2013, the very same tactics deployed against Allende in Chile in 1973 have failed to break civic–military unity or to dampen the commitment of the popular sectors to defend their democratic revolution and the elected government of President Nicolas Maduro. Indeed, Washington’s attempts to divide the region and isolate Venezuela have instead provoked regional associations such as CELAC and UNASUR, as well as the non-aligned movement and the G77 plus China group (which represents 134 nations), to declare their strong support for Venezuela and against Obama’s Executive Order. The Secretary General of UNASUR, Ernesto Samper, summarized the sentiments expressed in these declarations: “In a globalized world like the present one, you can’t ask for global rules for the economy and maintain unilateral rules for politics. No country has the right to judge the conduct of another and even less to impose sanctions and penalties on their own.”

It is not only states that have weighed in on Obama’s Executive Order. The grassroots outcry has been monumental. In the face of both the official and the broad based Repeal the Executive Order (#ObamaDerogaElDecretoYa) campaign that has so far gathered more than 13 million signatures, the White House, just four weeks before the Summit, conceded that Venezuela does not pose a threat to the security of the United States and tried to make light of the language of the Order by describing it as a mere formality used to impose sanctions. Ecuador’s president, Rafael Correa, wrote on his Facebook account: “It must be a bad joke, which reminds us of the darkest hours of our America, when we received invasions and dictatorships imposed by imperialism… Will they understand that Latin America has changed?” Of course, it is no joke. It is precisely the historic context of the Order, the continued presence of U.S. military bases in the region, and Washington’s ongoing attempt to impose neoliberal policies on those countries pursuing alternative economic models that put people before profits, that make this a serious matter.

In what might be a ray of hope, it was widely reported that President Obama met privately with Venezuelan President Maduro at the Summit on Saturday. Repeal of the Executive Order, however, would be a concrete constructive gesture for North–South relations and could open the door to a more meaningful Washington–Caracas dialogue.

The planned major theme of the Seventh Summit of the Americas was “Prosperity with Equity: The Challenge of Cooperation in the Americas.” But the major stumbling block to regional cooperation was obviously the North–South divide. The U.S. drive to recuperate its hegemony in the region places in question not only the democratic legitimacy of certain features of the inter-American System, but also the manner in which the OAS Summits are organized. In a remarkable speech at the parallel People’s Summit at the University of Panama in Panama City on April 11, President Correa proposed reforms to the inter-American System, including a new arrangement for hemispheric dialogue that separates intra-regional discussion between the nations of Latin America and the Caribbean (using CELAC as a forum) from those discussions that take place between North and South (using the OAS as a forum). He argued that only as separate power blocks should Latin America together with Caribbean nations engage in dialogue with the United States and Canada. We are reminded of the prophetic words of Jose Marti in 1894: “After the union of Latin nations, and only after this, can we aspire to a fraternal union with the other America, that of the North.”