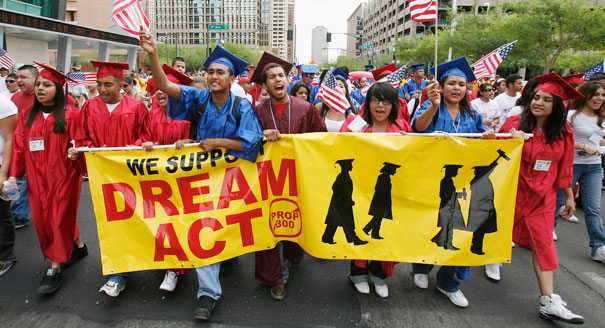 On Friday June 15, U.S. President Barack Obama announced plans to halt the deportation of immigrants who meet certain requirements. This executive decision legitimizes plans that the president announced while running for office, but was unable to pass through Congress. This action will affect approximately 800,000 immigrants, who arrived in the United States before they turned 16 and have been here for over five years. The criteria also specifies that they must have either graduated from high school or served in the U.S. military, not have a criminal record, and be under age 30.

Not all those who meet the criteria will choose to come forward, since the order is not guaranteed to last past the Obama administration. Presumptive Republican presidential candidate Mitt Romney refused several times to comment when asked his opinion on the action, while leaders of the Republican Party’s conservative base called the action illegal.

While the executive order may in fact be characterized as an overreach of presidential power, it enjoys overwhelming support by Latinos, who are sure to be a key demographic in the fall election. This disparity on the issue between the Republican base of the party and the growing number of Latino voters puts Romney in a tricky position, as he now has to walk back some of his harsh rhetoric on immigration policy expressed during the primary season without alienating the Republican base.

There is no question that this is a temporary fix to a long-term problem, for it can be undone as easily as it has been enacted. Eligible immigrants are exempt from deportation procedures and are entitled to apply for renewable two-year work permits. (1) However, there needs to be long-term comprehensive reform to present immigration policy. Both major parties have admitted this for a long time. Although it appears that Republicans do not favor such reform, this has not always been the case. Many senior Republican senators, including John McCain, Jon Kyle, John Cornyn, and Lindsey Graham, have supported the congressional version of this presidential action in the past and withheld their votes when the bill came to the Senate floor.(2) This bill has been brought up before Congress a number of times in the last three years, only to be blocked by Republican obstructionism. Critics of the bill say it rewards and encourages illegal immigration.

This move by the president has been criticized as a purely political maneuver, coming this close to the election. However, his supporters can reasonably claim that he signed the order out of frustration due to numerous failed attempts to pass this bill through Congress. On June 15, he lamented, “I have said time and time again to Congress, “Send me the DREAM Act, put it on my desk, and I will sign it right away.”(3)

Speaking on CBS’ Face the Nation, Romney charged that the president “did nothing on immigration in the past 3½ years.”(4) However, evidence suggests otherwise. This administration is on course to deport more people in one term than former President George W. Bush did in two terms.(5) There has been an 80 percent increase in deportation of undocumented migrants with criminal records, and there is a net-zero migration rate from Latin America, due to historically low border crossing. During the Republican Party primaries, Romney advocated for more stringent policies that he called self-deportation, which entails making life unbearable by turning every transaction with a government worker into an effective checkpoint, forcing them to move back to the country of origin.

The president admits that this executive order is not a long-term solution to the problem, and that he would rather have Congress act on a sustainable, comprehensive resolution. During his announcement, he remarked, “Precisely because this is temporary, Congress needs to act. There is still time for Congress to pass the DREAM Act this year, because these kids deserve to plan their lives in more than two-year increments. And we still need to pass comprehensive immigration reform that addresses our 21st century economic and security needs.”(6)

This executive order does not grant amnesty to, nor does it provide a pathway to, citizenship for undocumented migrants. This simply provides relief to thousands of law-abiding people who came to the United States through no decision of their own, forced to live in fear and uncertainty because they are afraid of being deported to a country they’ve never known. A top-down reformation of immigration law and policy is needed. Although Congress is currently stuck in gridlock over this issue, an increase in the Latino proportion of the vote means that we will see both sides of the political divide start to take this issue more seriously in the near future. Right now this measure, while born of good intentions, is too little. But it is never too late to correct a perennial issue like undocumented immigration.