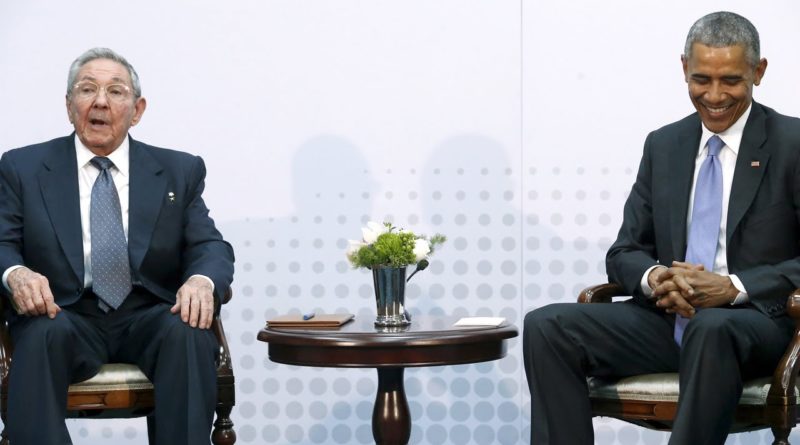 By Myra Miranda and Seohyeon Yang, Research Associates at the Council on Hemispheric Affairs

Hopes are riding high on President Barack Obama’s trip to Cuba on March 21 and 22. Millions in both countries hope the visit will help ensure the continuity in the progress already made in normalizing relations between the United States and the island nation. Many others, including at least two presidential aspirants, apparently hope it will fail to advance an administration policy of rapprochement between neighbors, but will succeed in helping elect a Republican to follow him in office.

President Obama’s trip (with his wife, first lady Michelle Obama) is the first time in 88 years that a sitting U.S. president visits Cuba. In 1927 President Coolidge traveled to the island with the official purpose of attending the Sixth Annual Conference of American States, held in Havana.

As announced on February 18 by the White House press secretary, Josh Earnest, the Obama administration’s goals include:

“advancing commercial and people-to-people ties that can improve the well-being of the Cuban people, and expressing our support for human rights.”

It’s about time. After half a century of Washington’s desire to isolate Cuba, this historic event marks a peak for U.S-Cuba relations. Since July 2015, the White House has asserted that restoring diplomatic ties between Washington and Havana will allow for new opportunities to connect U.S. and Cuban citizens through travel, commerce, and access to information.[2] President Obama’s efforts to lift the trade embargo that has harmed Cubans for almost 55 years has been opposed by a Republican-controlled Congress that has shown little interest in ending the embargo. Any U.S. president so inclined needs Congressional support, since only Congress can repeal this exclusion policy.

Contrasting Reactions in the U.S.

Not all Republicans oppose President Obama’s move. Senator Jeff Flake (R-Arizona) issued a positive statement regarding the president’s Cuba visit in which he stated:

“For Cubans accustomed to watching their government sputter down the last mile of socialism in a ’57 Chevy, imagine what they’ll think when they see Air Force One. Just think of the progress that can come from one day allowing all freedom-loving Americans to travel to Cuba.”[3]

This is in line with Senator Flake’s support on the direction of the Administration’s Cuban policy. He had welcomed previous moves to re-establish diplomatic relations with Cuba, increase travel and contact between U.S. citizens and the Cuban people. However, he is an exception in his party.

Republican presidential hopefuls Marco Rubio and Ted Cruz, both sons of Cuban immigrants, criticized President Obama’s visit to Cuba on CNN’s Republican presidential town hall last week. Senator Rubio has consolidated his stance against Obama’s Cuba policy by saying that he would not visit Cuba if he was President unless it was a “free Cuba.”[4] Senator Cruz denounced President Obama’s decision as a “mistake” in which the president would “essentially act as an apologist … before tyrants who hate America.”  He added, “My family has seen firsthand the evil and the oppression in Cuba. We need a president who stands up to our enemies.”[5]

Cruz and Rubio found common ground in regarding Cuba’s government as an “anti-American communist dictatorship,” in Rubio’s words.[6] Jeb Bush, the former governor of Florida (who has since called off his presidential campaign), termed Obama’s plans a “disaster,” characterizing the decision as an attempt to build his legacy before leaving the White House.[7]  For U.S. Representative Ileana Ros-Lehtinen (R-Florida), who was born in Cuba, it is “absolutely shameful … Pitiful that Obama rewards Castro with visit to Cuba while conditions for the Cuban people are getting worse.”[8]

In contrast to Republican political figures’ strong opposition, the U.S. public sees Castro’s Cuba positively, according to a Gallup poll taken last week. The Gallup survey’s sample in the United States recorded that 54 percent of respondents held a favorable opinion of Cuba.[9] It is the first Gallup survey since 1997 that reflects a favorable view of Cuba by a majority of the interviewed. Cuba, however, remains a highly polarizing issue for many Americans, and the partisan gap has widened. Gallup reports that the major changes in opinion relating to Cuba happened among Democrats.  In 2015, 73 percent of responding Democrats had a positive view on Cuba, showing a 28-point increase from 2014; there was, however, only a six-point increase in Republicans’ approval of Cuba side during the same period.[10]

Cuban-Americans, who increasingly favor Obama’s Cuba policy in general, have tended to oppose his intentions to visit the Caribbean state. A survey made on December 17, 2015, by Bendixen & Amandi International, a Hispanic and multicultural research firm, found that 56 percent of Cuban-Americans agree with Obama’s normalization of ties between the two countries and 53 percent think the U.S. embargo on Cuba should not continue. However, 52 percent answered “No” to the question, “Should President Obama visit Cuba before he leaves office?”[11]

In Havana, Josefina Vidal, Director General for North America at the Foreign Ministry, welcomed new negotiations with her government, saying:

Asked about President Obama’s intention to address human rights in Cuba, she responded that she would be open to conversations with the U.S. government on any issue but noted that the Cuban government has its own opinion of how countries deal with human rights, including the United States. She predicted, however, that dialogue between the two nations could bring great improvements.

Cuban President Raul Castro has made no public statement on Obama’s scheduled visit so far. He announced at the U.N. General Assembly last September that relations between the two countries can only be restored when the embargo is lifted and Guantanamo Bay is returned to his country.[13]

Despite claims that new negotiations with Cuba would make the United States appear weak internationally, one cannot altogether deny the advantages and positive impacts that can result from the summit-level diplomacy. It has been argued that the embargo should not be lifted unless Cuba is willing to abandon its Communist regime and espouse new economic and political reforms, including a democratic system that recognizes human rights.[14] After more than five decades of waiting for a result that clearly did not reach its objectives, Cuba shows no signs of renouncing its current system. Its citizens have been the ones most negatively affected by the economic sanctions, which have deprived them of greater access to technology, better health care, and affordable food.[15] Additionally, a study by Texas A&M University found that the embargo has cost U.S. farmers $1.24 billion a year in lost revenue.[16] Same study suggests that lifting sanctions could generate more than 31,000 jobs in the United States. Clearly, removing the trade embargo would not only allow Cuba to rise from political and economic isolation but also advance its reintegration with world commerce and global affairs — it would also materially benefit the United States and its economy.

President Obama’s efforts to normalize relations with Cuba have already set a precedent for his successors. History and many academics have concluded that isolating Cuba and applying economic sanctions to penalize leaders only end up affecting innocent civilians and fail to achieve positive or constructive outcomes.[17] Alternatively, a policy of engagement can create opportunities for people in Cuba and the United States to interact, cooperate, and do business. President Barack Obama is making important and overdue steps in repairing U.S-Cuba relations. The visit will be a legacy for his successors in the White House and in the policy establishment.

By: Myra Miranda and Seohyeon Yang, Research Associates at the Council on Hemispheric Affairs

[1] The White House. “Statement by the Press Secretary on the President’s Travel to Cuba and Argentina.” News release, February 18, 2016. The White House. Available at: https://www.whitehouse.gov/the-press-office/2016/02/18/statement-press-secretary-presidents-travel-cuba-and-argentina. Accessed on February 23, 2016.

[13] “Remarks by Raul Castro Ruz, President of the Councils of States and Ministers of the Republic of Cuba.” In General Assembly of the United Nations. Proceedings of General Debate of the 70th Session of the UNGA, New York. Available at: http://gadebate.un.org/sites/default/files/gastatements/70/70_CU_en.pdf. Accessed on February 23, 2016.