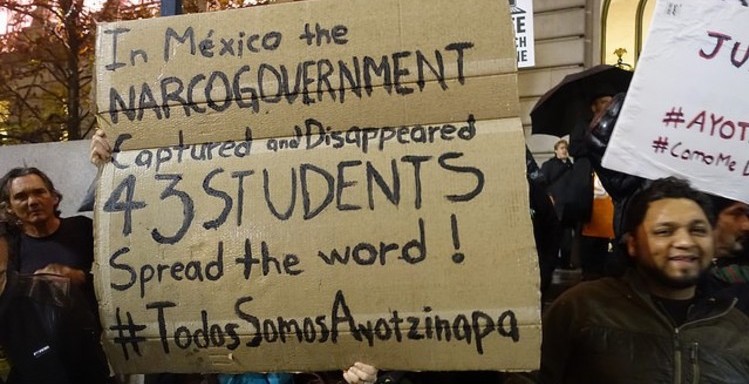 The White House Press Secretary described the visit as an opportunity to “continue strengthening the strategic partnership…expanding dialogue and cooperation between the United States and Mexico on economic, security and social issues, as well as underscoring the deep cultural ties and friendship that exist between our two countries.” [1]

During the meeting, President Obama avoided direct reference to the public security crisis that has intensified in Mexico and focused instead on Peña Nieto’s new push for economic reforms. President Peña Nieto followed suit by praising Obama’s executive order aimed at protecting nearly 5 million undocumented persons from deportation. Still, security issues and, as a byproduct, the human rights violations should remain the foremost concern in U.S.-Mexican relations in 2015. Since the initiation of the failed Plan Mexico in 2008 under President Calderón, drug cartels have managed to increase the violence and diversify their operations to include migrant smuggling and other forms of human exploitation.

The increasing levels of violence and corruption within Mexico have been augmented by the Mexican president’s escalation of the aggressive, militarized Mérida Initiative, or “Plan Mexico,” aimed at combating the drug trade. Corruption has been directly linked to the Mexican president through the scandal involving his wife’s purchase of a multi-million dollar mansion, built by the construction group, Higa, for a fraction of the cost. [2] This has sparked investigations into preferential treatment of the construction company and its associates when awarding government contracts, notably a high-speed railway project during Peña Nieto’s presidency and millions worth of contracts while acting as governor.

Large social movements of Mexican citizens, the U.S. Latino community, and progressive Americans alike have engaged in a series of protests opposing President Peña Nieto’s policies regarding the drug trade and corruption as well as Obama’s decision to host the Mexican president. This included the SOA Watch protest against Peña Nieto’s visit, the direction the U.S. “War on Drugs” has taken, and in memory of those who were disappeared in Mexico as a result, under the slogan “Enrique Peña Nieto NOT WELCOME.” The social movements share the view that the Mexican government, at all levels, has been infiltrated by the drug trafficking organizations and are being critical of President Obama’s support of its policies.

During a phone interview, Salvador Reza a coordinator at Arizona-based Tonatierra, a non-profit Indigenous Mexicans’ rights organization with 23 years of experience on U.S.-Mexico border activity, stated that, “Obama is making a big mistake by propping up a narco-government.” He continued to say, “The [Peña Nieto] administration should resign and allow the Mexican people to decide what kind of government that they want.” [3]

The September 2014 Iguala disappearance of the 43 students from the Teachers’ College of Ayotzinapa in the streets of Guerrero has marked an ominous tipping point for the volume of violence that Mexico’s civil society can withstand. A mother of one of the disappeared remarked that, “…if they want war they will have war. We are no longer afraid, we no longer have anything to lose.” [4] Several human rights organizations have estimated the number of disappeared persons since 2006 to be around 200,000, despite the Mexican Government’s claim that the number is around a tenth of that. [5]

As a result of the Mexican political system’s inability to initiate change, protests and social media movements calling for social justice and truth have emerged throughout Mexico, characterized by the hashtag #YaMeCansé and the U.S. equivalent, #USTired2.

Human rights abuses by the military and federal police continue to be increasing parallel to the rising violence with newly uncovered violations through survivor accounts. Moreover, a University of California Berkeley report has provided significant documentary evidence of the involvement of federal police and the military in the Ayotzinapa 43 tragedy. Civil society and human rights organizations issued a statement declaring that, “[w]hat happened in Ayotzinapa is not an isolated act; forced disappearance is a mechanism that the Mexican State has used to silence and contain social movements.” [6]

Following the massacre, the search for the students’ bodies has unearthed at least 25 separate mass graves dating back to October and November 2014, according to the Associated Press. [7] These findings were discovered in the midst of a search that has confirmed the death of only one of the 43 allegedly murdered and burned corpses. [8]

The recent events have been reflected in the drop of Peña Nieto’s approval ratings to under 40 percent in a recent Reforma poll and a crisis of eroding democratic legitimacy for his administration. [9] In the wake of a tumultuous 2014, Peña Nieto’s White House visit marks a critical juncture for him to secure continued U.S. security assistance and to attract U.S. investors amid violence, destabilization, and resulting protest movements.

However, the U.S. border area has not been out of reach of drug traffickers and organized crime operations. According to a Politico report conducted by Garrett M. Graff, “between 2005 and 2012, nearly one [Customs and Border Protection] officer was arrested for misconduct every single day,” including colluding with cartels and sexual assaults against migrants. [10] This penetration of the drug trade into the U.S. southern border poses an increasingly serious security concern for the Obama Administration as well as the Mexican political system.

Both the violence and human rights violations have sparked outrage in the United States over the Obama administration’s continued appropriation of U.S. security aid, through the Mérida Initiative, to a Mexican government viewed as corrupt. This continued support acts counter to the language of the U.S. Leahy Law prohibiting military assistance to “any unit of the security forces of a foreign country if the Secretary of State has credible information that such unit has committed a gross violation of human rights.”

This is not the first time that the United States has skirted its responsibility to uphold human rights standards. Similar cases occurred during the “false positives” scandal in Colombia and the use of a “certification” process during the Civil War in El Salvador exemplify important cases of the continued flow of U.S. security aid despite known human rights violations being perpetrated by the recipient governments. [11] Meanwhile, as the Obama Administration hosts a Mexican president with dubious human rights credentials, it claims that the Venezuelan government committed human rights violations against anti-government protesters and moves, paradoxically and unilaterally, to impose sanctions on the Maduro government. [12]

Historic U.S. support for Plan Mexico has, whether intentional or not, exacerbated the deteriorating democratic processes in Mexico through weakening its legislature and threatening civil liberties, particularly via the estados de excepción, instituted during the Calderón presidency. Such measures have given the military unprecedented power in the drug war, fueling its human rights abuses. Since 2008, the U.S. Congress has allocated $2.3 billion to Mérida Initiative programs and its activities. [13] Continued support for Peña Nieto’s policy, seen as an extension of Calderón’s policy, at this level continues to threaten the presence of the democratic institutions existing in Mexico.

Despite the presence of the protestors at the White House condemning the systematic human rights violations occurring in Mexico, a LatinNews brief of the presidential meeting reports that Obama continued to express his support for the Mexican president, reinforcing the U.S. government’s stand to fight organized crime, particularly within the drug trade. The only mention of human rights violations was President Obama’s statement that “the Mexican government has prime responsibility for enforcing the rule of law in its own territory.” [14]

The past two weeks represent a tactical shift in U.S. policy aimed at reasserting influence in Latin America, including the reopening of relations with Cuba. President Obama declared the United States to be renewing its leadership in the region, leaving U.S. policymakers with a decision to make:

Will the United States continue its current policy of providing security assistance to Mexico even as state actors have been implicated in serious human rights? Or will Washington transition to an authentic pro-democracy policy aimed at supporting the legitimate concerns of social movements for combating corruption, advancing human development through democratic procedures, and restoring the rule of law? The answer to these questions should become clear in the days ahead.

[1] The White House, Office of the Press Secretary, Statement By The Press Secretary On The Visit Of President Enrique Peña Nieto Of Mexico, accessed January 5, 2015, http://www.whitehouse. gov/the-press-office/2014/12/12/statement-press-secretary-visit-president-enrique-pe-nieto-mexico.

[12] Jonathan Watts, “Venezuela to face US sanctions over violence against protestors,” The Guardian, accessed January 6, 2014, http://www.theguardian.com/world/2014/dec/12/amid-violence-against-protesters-venezuela-to-face-us-sanctions.