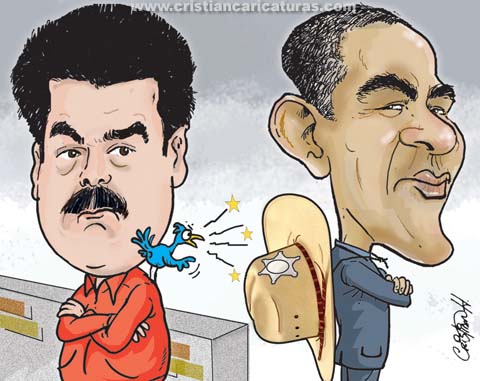 On Wednesday, President Obama called on the Venezuelan government to respect the “legitimate” efforts by the country’s opposition leaders to trigger a recall referendum against the country’s beleaguered president, Nicolás Maduro. The Democratic Unity Roundtable (MUD) coalition of opposition parties is hoping to stage the recall vote in order to remove Maduro from office and bring about the election of an MUD candidate to the executive branch.[1]

Obama made the remarks during a visit to Ottawa, Canada’s capital city, in which he met with Canadian Prime Minister Justin Trudeau and Mexican President Enrique Peña Nieto for the 2016 North American Leaders Summit. He issued a harsh warning to the Maduro government, describing the situation as “very serious” and indicating that Trudeau and Peña Nieto were on board with his pro-opposition stance.

The outgoing president, who has only a few months left of his term, stated that Venezuela’s democratic process “should be respected,” and that this includes “legitimate efforts to pursue a recall referendum consistent with Venezuelan law.”[2]

He also appeared to endorse dialogue between Maduro and opposition lawmakers in the National Assembly. He said: “Together we’re calling on the government and opposition to engage in meaningful dialogue and urge the Venezuelan government to respect the rule of law and the authority of the national assembly.”[3]

He added that “political prisoners should also be released,” in an apparent reference to opposition leaders such as Leopoldo Lopez who were convicted of offenses related to the guarimba street protests that took place in early 2014.

Also seemingly referencing these events, the Venezuelan foreign ministry hit back at Obama’s remarks with a statement arguing that “it is contradictory and illogical to urge the Venezuelan government to disregard the state of law with the sole end of satisfying the antidemocratic interests of the Venezuelan opposition.”[4]

Representatives of the Maduro government furthermore pointed out that there are MUD figures who are working for the United States, which has long been hell bent on crushing the Bolivarian process and backed the April 2002 armed coup against then-President Hugo Chavez.

Despite the harsh words against President Maduro, who was elected in 2013 by a 1.5 percentage point margin, Obama said nothing of the ongoing coup against Dilma Rousseff in Brazil, in which political rivals conspired to remove the democratically-elected president on trumped up accusations in order to prevent their own prosecution on corruption charges.[5] Nor did he issue any kind of condemnation to Peña Nieto for the killing of several teachers by state actors in Oaxaca last month.

Obama’s silence on Brazil and Mexico, as well as Honduras, Guatemala, Paraguay, Peru, and Argentina, all of which have serious human rights problems of their own, raises questions about the motives behind his strident posture on human rights and democracy in Venezuela. It seems to be quite a coincidence that, unlike Venezuela, none of these other countries stand in the way of his drive to re-impose neoliberalism throughout the region via a series of “free” trade agreements, such as the Trans Pacific Partnership.

Despite having been first elected in 2008 on the back of lofty promises of “hope and change,” Obama has proven to be one of the most servile puppets of corporate and traditional U.S. foreign policy interests. He has been willing not only to reverse his position on free trade deals, such as that with Colombia against which he campaigned vigorously during his first primary and general election campaigns, but has duplicitously had them passed through Congress using the so-called “fast track” procedure. Likewise, his government’s consistent failure to condemn with equal vigor the pustchismo tactics of extremist section within the Venezuelan opposition, some of which have been violent to the point of homicidal, has demonstrated his brazen bias and partisanship in favor of anti-Chavista forces.

Though former President Hugo Chavez soon realized that he was dealing with a wolf in sheep’s clothing, he was at first regrettably naïve about Obama’s status as a figurehead of imperialism and lackey for corporate power when he called him “a good guy” and said if the U.S. president were a Venezuelan, “he’d vote Chavez.”[6]

The idea that the United States could ever have a benign role in Venezuelan affairs has been made nonsense by its continued covert funding of opposition politicians, use of isolation tactics via the OAS, and consistent selective indignation over human rights and corruption concerns. The Maduro government has apparently overcome Chavez’s earlier misplaced optimism toward Obama by issuing a bold response to the United States’ “interventionist obsession” and shameless pandering to opposition forces.[7]