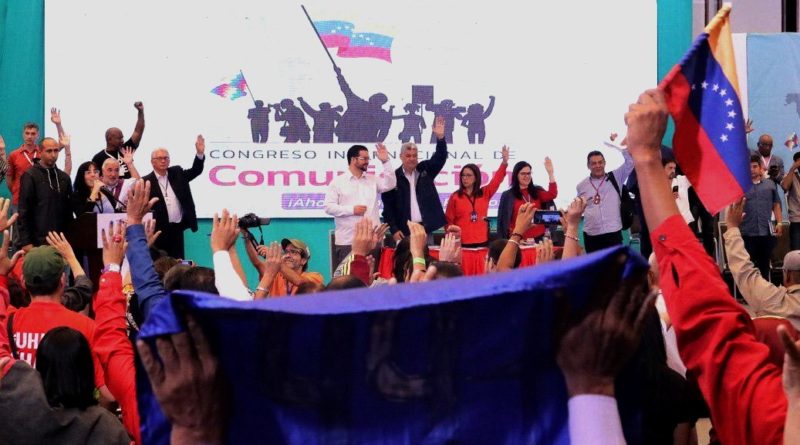 By Danny Shaw
From Caracas

From December 2 through 5, 1,700 international and local journalists and media activists gathered in Venezuela to network and brainstorm on how to break the domination of the corporate media narrative.[1] The International Congress of Social Communicators (named in this text as “the Congress”) was an initiative of the Foro de São Paulo, which since 1990 has sought to build the unity of different left-wing movements and parties. The author was one of five delegates representing the United States and the broad social movements fighting against corporate control of the production and distribution of information. One of the major goals of the Congress is to create a network of critical ethical journalism that accompanies the popular sectors who struggle to build a more just, democratic and equitable society.

A critical media and a plurality of views is vital to a true democracy. What we experience in the U.S. corporate media is generally its diametrical opposite — serious limitations of the spectrum of acceptable ideas and opinions.

While social media and a few publicly funded media outlets provide some measure of independence and critical reporting, the big five generally offer a myopic worldview that reproduces the presuppositions of U.S. exceptionalism. Tareq Haddad’s December 14 piece, “Lies, Newsweek and Control of Media Narrative: First-Hand Account” is but the latest example of the corporate stifling of critical voices at a time when they are most necessary. [4] Haddad’s meticulously documents the censorship he endured at Newsweek and his recent resignation because that magazine blocked him from questioning the validity of claims that the Syrian government had used chemical weapons against what the mainstream media labeled “moderate rebels.”

“Enemies and Friends:” Sorting through the Propaganda

A key element of the Pentagon and State Department’s strategy is to demonize any resistance to the construction of a unipolar world dominated by the U.S.-NATO alliance. Any country which dares to forge its own path independent of Washington and its junior partners earns the ire of the global hegemon. Mainstream media has generally gone along with the Manichean division of the world into good versus an axis of evil, or the U.S. versus the “Troika of Tyranny,” lining up allies on the side of good, no matter how nefarious their human rights record.[5] They also create the perception that adversaries are evil, even when their human rights records are either better or no worse than that of some U.S.-NATO allies. Mike Pompeo’s recent, arrogant “backyard” speech divided the hemisphere into democracies and allies (read, countries in the U.S. sphere of influence) and those undermining democracies (read, those nations asserting independence and striving for a post-neoliberal world).[6]

For the past twenty years, Washington has waged a hybrid war against Venezuela for this very reason. Part of this hybrid war recruits the news media to bolster the overall Manichean narrative. In some notable cases, the media has passed from news and editorial to direct participation in political action. Gregory Wilpert’s Changing Venezuela by Taking Power: The History and Policies of the Chávez Government dissects the direct role of some of Venezuela’s private media in engineering a coup against Hugo Chávez in April 2002. Wilpert documents the role of the TV stations Venevisión, Globovisión, Televen and Radio Caracas Televisión (RCTV) in the coup and the subsequent sabotage of the economy through the promotion of an oil strike.

Despite living through an almost endless civil war for two decades, Venezuela’s major daily newspapers generally have a wider spectrum of news coverage than those in the U.S.[7] For example the periodicals Ultimas Noticias and El Universal cover independent, opposition and Chavista views and news. If one surveys the available news media in Venezuela, it becomes evident that neither the opposition nor Chavismo are homogeneous phenomena. For this reason there is also a broad spectrum of views available on both the opposition as well as the Chavista camp. And of course, there are the more right wing newspapers, readily available online and in print, that give voice to the most hard line opposition as well as pro-government media One might ask: Would the U.S. ruling class be so tolerant of illegal coup-mongering channels if it were subjected to similar internal and external attacks?

With a global trend of privatization of the media, it was unthinkable that a sovereign government would challenge the supremacy of private stations through the development of people’s media outlets, as President Rafael Correa did in Ecuador and Chávez in Venezuela.

“Now the People Speak” was the slogan of the Congress, designed to offer new platforms to marginalized global voices.

The Congress opened with a moving testimony from Madelein García, who survived the “battle of the bridge” on the Venezuelan/Colombian border on February 23, 2019. Under the cloak of humanitarian aid, supporters of the U.S. backed self proclaimed “president” of Venezuela, Juan Guaidó tried to invade Venezuela, sparking murderous violence on the bridge and the highly publicized “burning of an aid truck.”[8] This was designed to be the event that could trigger a U.S. backed military or paramilitary invasion of Venezuela. The U.S. media opportunistically adopted the opposition claim that the Venezuelan government wantonly set fire to the aid truck. Venezuelan and international reporters, however, had risked their lives to document the truth, on the ground, about what had happened. As a result, the mainstream media was forced to backtrack on their story and admit that “the opposition itself, not Mr. Maduro’s men, appears to have set the cargo alight accidentally.”[9]

The fake news disseminated by corporate media in uncritical fidelity to opposition sources was used by top U.S. government officials to denounce Maduro, adding fuel to the relentless call for regime change. On February 24, Max Blumenthal of The Grayzone, using the more reliable reports provided by Telesur reporter Madelein García, as well as corroborating video and photographic evidence, debunked the fake news about the burning of the “aid” trucks.[10]  On March 10, the New York Times finally came clean on the more likely cause of the fires, but instead of crediting the Venezuelan journalists and citing the Grayzone article, it claimed to have an exclusive report on the issue:

“Unpublished footage obtained by The New York Times and previously released tapes — including footage released by the Colombian government, which has blamed Mr. Maduro for the fire — allowed for a reconstruction of the incident. It suggests that a Molotov cocktail thrown by an antigovernment protester was the most likely trigger for the blaze.”[9]

Has the NYT provided a new “reconstruction” of the incident? Not quite. Footage had indeed been “previously released” by journalists reporting from the site of the confrontations and widely disseminated by alternative media. How “accidental” the fire was is up for debate as the invading forces were hurling molotov cocktails at soldiers and civilians defending Venezuela’s territorial sovereignty.[9] This incident was but one important example of why critical journalism and a global network to support it is so important.

Participation and the Agenda of the Congress

1.     Communication: against Hegemony, for Decolonization

3.     Liberation Journalism amidst the Structural Crisis of Capital

5.     Information and Social Media in Latin America and the Caribbean: Challenges and Mazes

6.     Ethics of Journalism in Venezuela and Our América

7.     Means of Communication in Times of War

In all of the workshops, participants expressed their admiration for counter hegemonic media outlets who offer alternatives to the mainstream outlets.

On the opening night, the crowd of thousands heard from journalists and anti-imperialist organizers who gave the all too often invisibilized point of view of those on the frontlines of struggle against neoliberalism and police repression in Bolivia, Haiti, Chile, Ecuador, Colombia, the Bronx and beyond.

The Congress closed at the Palacio Miraflores with an address from President Nicolás Maduro. Representatives from across the world presented the decisions ratified by the Congress and a five-page document renouncing U.S. meddling in the region and “demanding the immediate cessation of all interventionist activities designed to destabilize a continent of peace.”[11]

Diosdado Cabello, the vice-president of the United Socialist Party of Venezuela (Partido Socialista Unido de Venezuela, PSUV), put an exclamation point on the Congress. Delegates packed the auditorium at Hotel Alba to participate in Cabellos’ El Mazo Dando (The Judge’s Mallet Strikes), a TV show aimed at broadening the base of the Bolivarian revolution and going on the offensive against the hard line right-wing opposition and their foreign backers.

With the election of Hugo Chávez in 1998, Venezuela began to defy U.S. domination and forge its own destiny, proving to be a dangerous example of self-determination for other nations to follow. What we are seeing play out today is a continuation of the battle between Monroeism and Bolivarianism, la antipatria and la patria. Irate and incredulous at Venezuela’s refusal to cave, the U.S. has meted out the most punishment against the stubborn nation of thirty million, blockading them and holding the “military option” over their heads at every turn.

At a meeting with social movements in Madrid, Spain, Venezuelan Foreign Affairs Minister Jorge Arreaza put the situation bluntly: “We are a continent that is being disputed, this delays a historical project, and from Venezuela we have successfully contained the Monroe Doctrine. Every blow from imperialism strengthens us and convinces us that we are on the correct side of history.”[12]

El Congreso Internacional de Comunicadores Sociales was an extension of this effort to unite the world’s oppressed people and build multipolarity. The Congress brought a series of approved resolutions to Nicolás Maduro and the Bolivarian project for the continent. One of the key proposals was the foundation of the new International University of Journalism which will open in Venezuela, Perú, Argentina, Bolivia, Cuba and México to train a new type of social communicator.[13] This popular university will be dedicated “to the technical and political formation and analysis of discourse to generate proposals capable of confronting business and institutional campaigns dedicated to miscommunication, misinformation and acculturation.”[14]

With the continental insurrection underway, the Congress’s contributions will be a valuable bastion of struggle against unipolarity moving forward. Next year, the Second Annual Congress will be held in Nicaragua.

[2] Malcolm X. “It’ll be the ballot or the bullet” speech.” Detroit, Michigan. April 12, 1964. Entire passage follows: “And when I speak, I don’t speak as a Democrat or a Republican, nor an American. I speak as a victim of America’s so-called democracy. You and I have never seen democracy – all we’ve seen is hypocrisy. When we open our eyes today and look around America, we see America not through the eyes of someone who has enjoyed the fruits of Americanism. We see America through the eyes of someone who has been the victim of Americanism. We don’t see any American dream. We’ve experienced only the American nightmare.”

[7] Wilpert, Gregory. Changing Venezuela by Taking Power: The History and Policies of the Chavez Government. Verso Books. 2007. And “The Revolution Will Not Be Televised.” Documentary produced by Kim Bartley and Donnacha O’Briain. November 5th, 2003.

[11] Final Declaration of the International Congress of Communication.