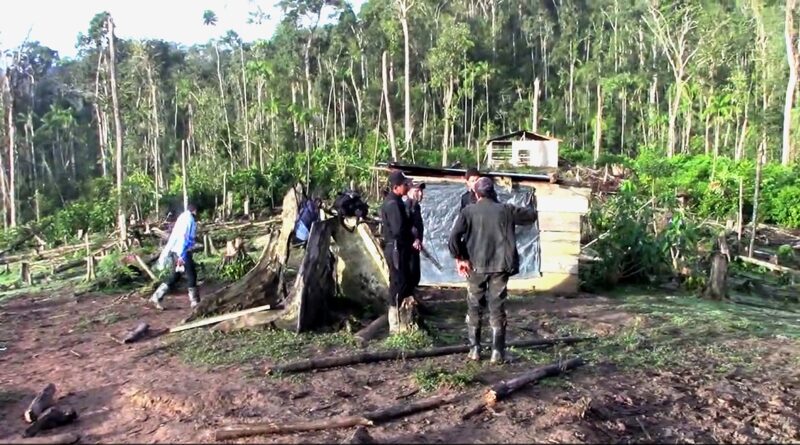 Indigenous peoples and the rainforests that many inhabit are under threat. Everyone knows it. In Latin America especially, international NGOs like Global Witness and Frontline Defenders tell a story which seems self-evidently true: outsiders are exploiting natural resources, governments are indifferent or actively complicit, Indigenous people defend the forests and in return face expulsion or death. But what happens when real life is more complicated? In Nicaragua, local and international NGOs pursuing a political agenda are twisting the evidence about environmental conflicts.

Nicaragua has the largest area of tropical rainforest north of the Amazon. Attention often focuses on the country’s biggest forest reserve, Bosawás, a remote region in the north-east, close to Nicaragua’s Caribbean coast. The two main groups who live in the reserve, the Mayangna and Miskitu, benefit from Nicaragua’s advanced system of self-rule for Indigenous and Afro-descendant peoples. The groups are characterized by NGOs as environmental or human rights defenders, desperately trying to protect their forest lands against settlement by colonos (settlers) who want to exploit the timber and mineral resources or create cattle ranches. According to The Guardian,[1] campaigning group Global Witness says that Nicaragua, with 12 environmental defenders killed in 2020, was “the deadliest country [in the world] for environmentalists on a per-capita basis and one of the fastest-deteriorating hotspots, with killings more than doubling from the previous year.” As can be seen from the list below, a range of international organizations made similar accusations about Nicaragua in 2020.

One striking element of these accusations is the hyperbole – Nicaragua is characterized as “the most dangerous country” for environmental defenders and is engaged in “ethnocide,” risking the “complete disappearance” of some ethnic groups. Yet the evidence hardly bears out such claims. Take Global Witness’s annual reports.[8] This author’s analysis of their statistics on Nicaragua in 2015 and 2016 showed that 21 of the deaths cited were related to land disputes in north-east Nicaragua.[9] In 2017, GW reported four such deaths in their annual report and in 2018 none at all. Five deaths were reported in 2019 but these involved one family in a different part of Nicaragua. In 2020, as noted above, 12 deaths were reported, all from the region that includes Bosawás. This means that GW has recorded some 37 violent deaths in and near Bosawás in six years, or about six deaths per year. While such violence is tragic and regrettable, it hardly amounts to “ethnocide” given that there are some 180,000 Miskitu and 30,000 Mayangna people, the majority living in this part of Nicaragua.

What feeds this exaggerated characterization of the fate of these Indigenous groups? The international bodies listed above rarely conduct detailed investigations themselves. Instead, they rely on the supposedly reliable evidence fed to them by smaller organizations, of which the key ones covering the Bosawás region are the Oakland Institute (an NGO based in San Francisco),  Nicaraguan-based CEJUDHCAN (in English, Center for Justice and Human Rights in the Atlantic Coast of Nicaragua) and CALPI (Center for Legal Assistance to Indigenous Peoples), both with offices on the Caribbean coast. CALPI reveals no financial information on its website,[10] but it is linked to the International Human Rights Law Group (IHRLG),[11] which is funded from multiple sources including USAID and the National Endowment for Democracy. IHRLG also funds CEJUDHCAN, and even lists its director, Lottie Cunningham, as a staff member.[12] It should be noted that while Lottie Cunningham blames the government for these problems, most of her Miskitu relatives disagree with her and instead work to defend their community through the government.[13] Writing in Covert Action,[14] Rick Sterling showed that CEJUDHCAN also receives USAID money. It works closely with the Oakland Institute, whose $237,294 “Land Dispute Project – Nicaragua” is funded by the Howard G. Buffett Foundation which (as Sterling points out) is “interconnected with the [US] foreign policy establishment.” The key output from this project was a report deeply critical of the Nicaraguan government’s treatment of Indigenous peoples and pejoratively titled Nicaragua’s Failed Revolution.[15]

The close links between the three small NGOs and the international ones lends the former a dubious measure of credibility and means their “evidence” is readily accepted by formal intergovernmental bodies such as the Inter-American Commission on Human Rights (IACHR). For example, on March 18 2021, IACHR held an online public hearing on the colonization of Indigenous lands in Nicaragua, which was announced in advance by the Oakland Institute and had clearly been planned in conjunction with them.[16]

Alongside the Oakland Institute, the organizations giving evidence were CEJIL, CEJUDHCAN, CALPI, IIREHR and OMCT. The session was chaired by Antonia Urrejola, newly elected president of IACHR, who is also a staff member of CEJIL. While the Nicaraguan government was invited to respond to the accusations, and in theory individual questions and reports could be submitted, in practice none that were critical of the NGO evidence (including questions from this author and others) were put to the session.[17] Even more crucially, none of the elected representatives of the relevant Indigenous communities were invited to take part. The parent body of the IACHR is the Organization of American States (OAS), notorious for following a pro-US agenda. Effectively, such intergovernmental bodies, together with international and local NGOs, many receiving funds from US government agencies, form a cabal when it comes to criticizing the Nicaraguan government, one that is impervious to evidence that contradicts their stance.

Evidence from the sites of the attacks contradicts the NGO reports

In the case of the alleged “ethnocide” in Bosawás, the narrative set by these reports is aided by the difficulty in collecting evidence that might contradict it, because of the region’s remoteness. Fortunately a Nicaraguan-based writer and investigator, Stephen Sefton, has been able to travel there twice to interview people from the respective communities and local officials. His interviews last year, together with interviews by him and this author with Nicaraguan government officials and cattle ranchers, showed that the allegations then being made by the Oakland Institute and CEJUDHCAN that beef exports from Nicaragua to the United States were provoking “ethnocide,” because ranchers were driving out Indigenous peoples in Bosawás, were completely false.[18] Reveal News and PBS Newshour, which had run the story about “conflict beef”,[19] were forced to change their position.[20] Anuradha Mittal, director of the Oakland Institute, resorted to Twitter to make ad hominem attacks on her critics.[21]

Sefton’s latest interviews, made this month (September 2021), investigate the worst incident so far this year, on August 23 in an area deep in the forest reserve, known as Kiwakumbai. While it is too soon for this to feature in annual reports by GW and other bodies, it has already been publicized by the Oakland Institute, CALPI, CEJUDHCAN and another NGO called Fundación del Río.[22] In turn, it was picked up by the Associated Press and by ABC News.[23] According to the NGOs, “settlers massacred at least 11 members of the Indigenous Miskitu and Mayangna peoples living in the Bosawas Biosphere Reserve.” “The settlers continue killing our people with total impunity,” said CEJUDHCAN’s Lottie Cunningham. “The state has ignored our requests to investigate and prosecute past murders at the hands of settlers, and now the authorities are refusing to even acknowledge that this massacre took place. This impunity guarantees that more massacres like this will happen.” CALPI told AP News that Indigenous residents were attacked “with machetes and guns, and were tortured. They hung their bodies from a tree.”

The police, who did investigate the murders, reported that nine people died, and two women were raped; three suspects were quickly captured and 11 are being sought.[24] Sefton, travelling to the site some two weeks later, took two and a half days to make the journey, through terrain only accessible on foot or by mule. His video report explains that the site of the attack was an artisanal goldmine, now abandoned, operated by a mixed group of about 40 Mayangna, Miskitu and mestizo or non-Indigenous miners (including the victims of the attack).[25] Knowledgeable local people told him that earnings from the mine could well have been US$7,000-10,000 a month.

The mayor of Bonanza, Alexander Alvarado Lam – who accompanied Sefton – explains that the attackers were identified by the survivors as a group of mainly Mayangna people, who had been demanding money from the miners.[26] Sefton’s crucial finding, therefore, is that the attack was a vicious and tragic intra-communal incident about control of a valuable asset, not an attack by settlers on Indigenous people. Interviewed in his office, the mayor also points out, albeit diplomatically, that outsiders take advantage of such violent incidents to criticize the government, but do not travel into the Indigenous territories to find out what is really happening.[27] He went on to describe the efforts being made by government agencies to control settlement and illegal land sales.

The international media’s narrative is based on falsehoods

The mayor also confirmed to Sefton that one of the main attacks reported in 2020, in another Mayangna settlement called Alal, was similarly misrepresented by the Oakland Institute in its report Nicaragua’s Failed Revolution.[28] In this case, the attack was by settlers, but it was in revenge for the fact that some Mayangna people had illegally sold land to them and had not honored the agreement they had made. As I reported for FAIR at the time,[29] and was confirmed by mayor Alvarado, there is a persistent problem that some Indigenous people are encouraging settlers, and encouraging gold mining, thus damaging the forest reserve not protecting it. Nevertheless, the victims of this attack were categorized as “environmental defenders” in reports by Global Witness and other international groups, a story picked up by Reuters and repeated by international media such as The Guardian and BBC.[30]

Sadly, the reports from the Oakland Institute, CEJUDHCAN and CALPI are riddled with dishonest statements: another from last year concerned an alleged attack by settlers on a young girl, that (as FAIR also reported) was in reality an accident involving family members.[31] That this misreporting happens time after time, despite the real causes of the incidents being revealed, shows that these organizations are not looking for the truth but are engaged in a political campaign. In blaming settlers for every violent incident, portraying the Indigenous people as invariably environmental defenders and criticizing the police for failing to act, they can accuse the state of turning a blind eye to the settlers’ actions or even allege that the government is behind the violence. No doubt the Kiwakumbai incident will be catalogued in the annual reports of international NGOs like Global Witness, showing once again that Nicaragua is “the most dangerous country” for environmental defenders.

As is clear from this investigation, and was already clear from incidents last year, the real situation is far more complex and – while very unfortunate – cannot be reduced to a simple story of violence against Indigenous forest-dwellers. Of course, more could and should be done to protect Bosawás and other forest reserves and the people who live in them. But to use this issue to attack a government which has done far more than its predecessors to protect Indigenous rights is little short of scandalous.

[4] “A year of violence against those defending the rights of the Mayangna and Miskitu Indigenous peoples,” https://www.omct.org/en/resources/urgent-interventions/nicaragua-briefing-conjunto-un-a%C3%B1o-de-violencia-sistem%C3%A1tica-contra-quienes-defienden-los-derechos-ind%C3%ADgenas

[6] “Report reveals that Attacks against Indigenous Miskitu community in Nicaragua has Put Them at Risk of Disappearance,” https://cejil.org/en/press-releases/report-reveals-that-attacks-against-indigenous-miskitu-community-in-nicaragua-has-put-them-at-risk-of-disappearance/

[9] “Is Nicaragua really the world’s ‘most dangerous country’ to be an environmental defender?” https://twoworlds.me/latin-america/is-nicaragua-really-the-worlds-most-dangerous-country-to-be-an-environmental-defender/

[19] “In Nicaragua, supplying beef to the U.S. comes at a high human cost,” https://www.pbs.org/newshour/show/in-nicaragua-supplying-beef-to-the-u-s-comes-at-a-high-human-cost

[20] “Nicaragua to crack down on conflict beef,” https://revealnews.org/article/nicaragua-to-crack-down-on-conflict-beef/