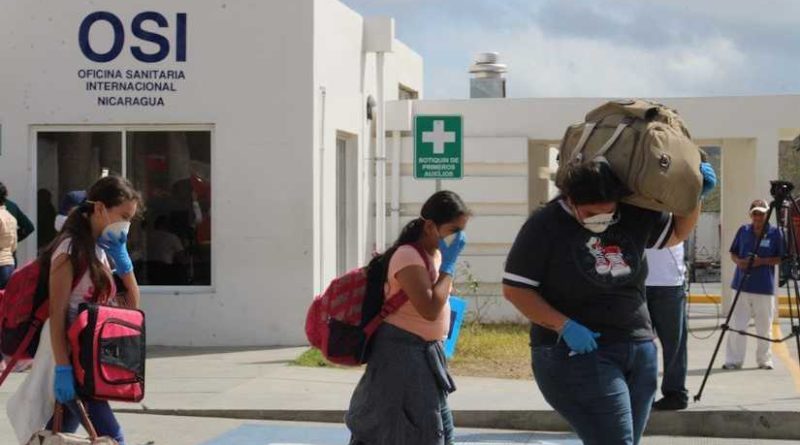 The United Nations High Commissioner for Refugees (UNHCR), the Organization for World Peace, and some of the mainstream media, are raising the specter that a crisis is unfolding because of increased refugee emigration from Nicaragua to Costa Rica.  Yet neither the empirical data on migration between these two Central American nations nor the return to normalcy in Nicaragua support this argument. The coronavirus pandemic, which has led to tighter border closures between Nicaragua and Costa Rica, is putting a spotlight on this issue. Here we examine the history of the Nicaraguan immigrant presence in Costa Rica and argue that projections of a refugee crisis are not consistent with the evidence.

The coronavirus epidemic is still in its early stages in Central America but it has already put a focus on Costa Rica’s dependency on workers from Nicaragua. At any one time there are around 400,000 Nicaraguans working in the neighbouring country, especially doing building work, domestic work, as security guards or in agriculture. Given that a large proportion are undocumented, the real figure could be much higher, a very significant addition to Costa Rica’s population of under five million people. Yet the Vice-President of Costa Rica, Epsy Campbell, made a call this month to employers to persuade their Nicaraguan workers to stay put over the coming Easter holidays when otherwise they might leave to see their families.[1] She was clearly worried about the impact on Costa Rica’s economy if workers left the country and were unable to return because of the restrictions at the border resulting from the coronavirus epidemic.

So the current epidemic has brought grudging recognition by Costa Rica of the importance of “Nicas” to its economy. Yet until just a few weeks ago, Costa Rica’s president Carlos Alvarado was making regular calls for help to deal with the numbers pleading asylum in the country since the attempted coup in Nicaragua in April 2018.

Alvarado has cultivated a close relationship with the UN High Commission for Refugees, whose officials have praised Costa Rican institutions during their regular visits. Last year they awarded his government $650 million to meet the “challenge” created by the ongoing “crisis” in Nicaragua, even though by then Costa Rica’s neighbour had long been at peace.[2]

Then on March 10 this year 2020, even as the coronavirus crisis was escalating, the United Nations High Commissioner for Refugees (UNHCR), suddenly decided to dramatize a problem that most people had thought was being steadily resolved. Its spokesperson Shabia Mantoo asserted that 4,000 Nicaraguans “continue to flee their country” every month, principally to Costa Rica.[3] “With no political resolution in sight”, she tweeted, “refugee outflows [are] expected to continue,” making no reference to the amnesties in Nicaragua for those who left for Costa Rica and the promises of safe return.[4] Despite the UNHCR giving no source for its claim that 4,000 Nicaraguans continue to flee abroad, its message was accepted as authoritative and quickly picked up by international media. The Guardian, for example, warned that the “exodus [is] expected to continue… amid fears of [a] repeat of state and police repression.”[5] The Organisation for World Peace went much further, making the absurd claim that Nicaragua threatens to cause the world’s next big refugee crisis.[6]

A porous border that ensures work for thousands of Nicaraguans

In this situation, especially as both countries face a real crisis produced by the coronavirus pandemic, cool heads are needed. These alarmist stories are not only bereft of real facts, but appear to be written by people ignorant of the historic economic and social ties between these two countries, which are much stronger than, for example, either country’s relationship with its neighbours to the north (Honduras) or the south (Panama). At the end of 2018, almost 350,000 Nicaraguans were officially recognised as residents in Costa Rica, a figure which had grown by only 10,000 during the year of Nicaragua’s crisis.[7] Many more, possibly even the same number again, are believed to live and work undocumented in Costa Rica. This is made possible by the long and porous land border: there are said to be 20 or more unofficial crossing places, many of them known to authorities on both sides. Nicaraguans can easily cross into Costa Rica, work for perhaps six months harvesting coffee or picking bananas, and return home with their wages, no questions asked. Most Nica families, especially in rural areas, have someone who has done this.

The reality is that huge numbers of Nicaraguans travel in both directions across the border on a daily basis. For example, official figures show that in March 2018, a month before the crisis, 33,000 Nicaraguans headed south while 44,000 returned home. The whole of 2018 saw over 800,000 Nicaraguans coming and going: 48% of those were travelling back to Nicaragua, a country which according to the UNHCR was (and still is) in “political and social crisis”. Numbers rose to 830,000 in 2019, now almost evenly split between those travelling in either direction.[8] Indeed, extra demand led the long-distance bus companies operating between the two countries to increase their services. And, of course, the large volume of undocumented border crossings must be added to these official figures.

How does this help us understand the “refugee outflow” from Nicaragua? First, we have to ask whether the figures being quoted are plausible. Costa Rican migration figures show a total of just under 55,000 applications for asylum by Nicaraguans in the past two years (23,063 in 2018[9] and approximately 31,500[10] in 2019). Assuming these accurately reflect the bureaucratic process, they are significantly below the figure of 77,000 given by the UNHCR.[11] Even if all of the 55,000 were new arrivals,  the numbers are very small as a proportion of Nicaraguans officially crossing into Costa Rica.  For example, in 2018 asylum requests came from less than 6% of those officially counted as crossing the border that year, and of course this would be an even smaller proportion if illegal border crossings were taken into account.[12] Even counting its non-Nicaraguan asylum seekers, Costa Rica has just 0.05% of the global total of nearly 75 million people classified as “of concern” to the UNHCR.[13] It seems Costa Rica is far from facing “the world’s next big refugee crisis.”

Most “refugees” are actually economic migrants

What is more, the 55,000 claims appear to include many that aren’t genuine. President Alvarado acknowledged in August 2018 that more than 80% of the recent asylum requests came from people who had been living in Costa Rica without documents, before Nicaragua’s crisis of April 2018.[14] In other words, four out of five asylum seekers were (according to the Costa Rican government itself) judged to be economic migrants, living in the country already and now trying to take advantage of the crisis to regularise their status. This might explain why Costa Rica is approving very few of these applications: in 2018 it approved only six; by May 2019 it had approved a total of 24, and by then it had also rejected 1,300 as being “economic migrants,” not genuine asylum seekers. During 2018, Nicaraguan applicants had one chance in 3,800 of being officially accepted, whereas asylum seekers from El Salvador (for example) had a one in ten chance. Nicaraguans also accounted for 84% of the 1,181 people deported in 2018. In addition, Costa Rica gave over 4,800 Nicaraguan asylum seekers permission to work, instead of recognising them as refugees, officially accepting that they were there to obtain jobs.[15]

The UNHCR not only exaggerates – probably by a very big margin – the number of genuine asylum seekers in Costa Rica, it goes on to claim that there are 4,000 new asylum seekers per month, expecting “these numbers to grow”.[16] This amounts to forecasting in excess of 50,000 new cases over the course of 2020, or a near doubling of the total reached at the end of 2019. It seems little more than a figure plucked from the air. Why would more people leave now than at the peak of the crisis in 2018? Is the UNHCR unaware that, by the Costa Rican government’s own admission, more than three-quarters of cases arise from Nicaraguans already living there? If, as the enduring presence of Nicaraguan labor in Costa Rica indicates (and is implied by the Costa Rican government’s decisions on cases) the pressure to emigrate from Nicaragua to Costa Rica is mainly an economic one, why would one expect more people to leave as the Nicaraguan economy recovers from the damage done by the roadblocks and other disruptions in 2018? Of course, both economies are now susceptible to damage as a result of the pandemic, but if anything this will lead to less movement across the border as security measures tighten.

The 2019 report Dismissing the Truth noted that some informal interviews carried out with Nicaraguan asylum seekers in Costa Rica confirmed what President Alvarado had said about many being economic migrants.[17] Of those who were recent arrivals, some said they were not fleeing persecution but rather had been affected by the intense economic crisis produced in Nicaragua by the blockading of cities by opposition gangs in the period April-July 2018, which meant that businesses closed down and many workers lost their jobs. Some had fled because they had committed crimes when controlling the roadblocks and were well aware they would be held accountable if they stayed. Those in this category included (for example) the criminals responsible for the kidnap, torture and murder of the unarmed police officer Gabriel de Jesús Vado Ruíz in Masaya, Nicaragua, on July 14-15, 2018.

Most of the prominent opposition figures have returned to Nicaragua

Perhaps the biggest paradox is that, as the figures in this article indicate, Nicaraguans have been free to travel in and out their country and many have done so, encouraged by the amnesty granted in 2019. One of the internationally accepted tests of a genuine refugee is that they cannot return home or are afraid to do so. As the Costa Rican government makes clear from its actions, most Nicaraguans in the country do not meet this test. Those returning to Nicaragua have included most of the prominent political critics of Nicaragua’s Sandinista government, who have not only moved back but have since been busy travelling to the United States and elsewhere, lobbying against their own government, apparently without facing any problems on their return. It is of course very much part of their message that Nicaragua is still in a “crisis” which can only be resolved if they, rather than elected President Daniel Ortega, were to be in power.

Both UNHCR and the OAS misrepresent the situation

The UNHCR is not the only international body to be complicit in sustaining the argument that Nicaragua’s crisis is unresolved. The same applies, for example, to the Organisation of American States (OAS). Costa Rica’s leaders have been consistent critics of the Sandinista governments, and they have both a political and economic interest in maintaining the fiction that it is they who are suffering from Nicaragua’s continuing “crisis”. It has taken a pandemic to flush out the truth, that Costa Rica is as dependent on Nicaragua economically as Nicaragua is on Costa Rica. And as to the true scale and nature of the refugee problem in Costa Rica, the UNHCR has a duty to explain the actual context, report the facts, and avoid alarmist forecasts that have little basis in reality.

John Perry is a writer based in Nicaragua and writes on Central America for The Nation, London Review of Books, Open Democracy and The Grayzone.

[6] “Nicaraguan Dissent Threatens To Cause The Next Big Refugee Crisis,” https://theowp.org/nicaraguan-dissent-threatens-to-cause-the-next-big-refugee-crisis/