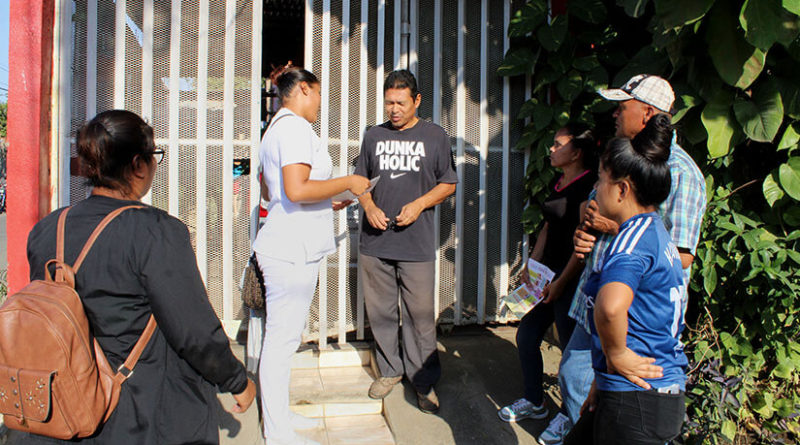 The right-wing opposition in Nicaragua, having failed in their attempted coup in 2018, still looks at any potential crisis as a new opportunity to attack the Sandinista government. Their latest chance, of course, arrived with the coronavirus pandemic. Even though the virus has barely hit the country yet, the government is under attack. The international media are lapping up opposition propaganda and ignoring or disparaging the government’s efforts to deal with the coming crisis, even though preparations began before those in many other countries.

Since early April, Nicaragua’s well-connected opposition leaders have used their contacts in the international press to push a series of stories relating to the pandemic. These stories – detailed below – variously claim that President Daniel Ortega is in quarantine or has died, that his government is in denial about the coronavirus or that it is ill-prepared and inactive in the face of the threat. None of this is true. What is worse, it seems based on the tone of news coverage, that reporters who are unable to visit the country nevertheless make little attempt to find out what action the government is actually taking and whether opposition criticisms have any substance.

At the time of writing (April 16, 2020) Nicaragua has only nine confirmed virus cases, all of them people who have come from abroad or their immediate contacts.[1] The opposition and the media pour scorn on the official figures and (without evidence) claim that infection levels are far higher. Ignoring the daily press briefings by Dr. Carlos Sáenz, Secretary General at the health ministry,  the opposition claims that Nicaraguans are being kept in the dark. Despite health officials having visited 2.7 million households,[2]sometimes on several occasions, to dispense advice (see photo), the opposition complains that there is little or no guidance on combating the virus.

How the international media attacks developed

The attacks began on April 4 with BBC World, which in addition to criticising President Daniel Ortega for not making public appearances asserted that his government had taken “no measures at all” in the face of the virus threat.[3] Then The New York Times (April 6), asking Where is Daniel Ortega?, said his government had been “widely criticized for its cavalier approach” to the pandemic.[4] It quoted opposition supporters who say the public “is deeply dubious about government claims.” On April 8, The Guardian said that Ortega was “nowhere to be seen.” [5] By April 13, The Washington Post said Ortega had “vanished” and castigated his government’s “laissez-faire approach” (the Post’s print edition even managed to report that nine virus victims had died, when there has been only one death so far).[6] According to The Guardian, on April 12, the “authoritarian” Daniel Ortega is one of only four world leaders who are in denial about the coronavirus (among the others is, of course, the right-wing Bolsonaro in Brazil).[7] The attacks have even been reproduced by the international medical journal, The Lancet.  On April 6, an article entitled Love in the time of COVID-19 labelled the government’s approach as “erratic” and “violating the human rights of its citizens.” [8]

The real situation in Nicaragua

What is the real situation in Nicaragua? The country has had health checks at its borders for months, far sooner than in the US. Travellers entering Nicaragua are managed tightly, and officials follow up with new arrivals by phone and by house visits, as I know from my own and friends’ direct experiences after arriving in the country. Two lengthy and porous land frontiers make it preferable to keep borders open so as to minimise informal crossings which make health checks impossible. When people do cross illegally, neighbors often report them using a free, dedicated phone number set up a few weeks ago. This number is also used to obtain more general advice on the virus. Nineteen hospitals have been identified to receive virus cases and 37,000 health workers and 250,000 volunteers have been trained accordingly.[9] The result is that – so far at least – Nicaragua’s nine virus cases represent the lowest infection rate in Latin America.

Social distancing and its costs

In the international press, opposition spokespeople call for more drastic measures such as social distancing and school closures. Reporters ignore the obvious dilemma that faces poor countries in deciding when to take such steps. Importantly, even though the World Health Organization has emphasized the importance of social distancing, it also recognises this dilemma. Its Director General, Tedros Adhanom Ghebreyesus, said this on April 16:

“Governments must consider that for some countries and communities, stay-at-home orders may not be practical, and may even cause unintended harm. Millions of people around the world must work every day to put food on the table. They cannot stay at home for long periods of time without assistance.”[10]

In Nicaragua, because all confirmed COVID-19 cases so far have come from abroad, the government assessment is that no or very limited local, community transmission has taken place.[11] This is why there continues to be vigilance while wider measures have not yet been imposed. If self-isolation becomes necessary it will carry a massive cost as seen for example in the US and other countries, as most people need to go to work daily to eat. There is no reliable mechanism to distribute subsidies, nor can small, poor countries like Nicaragua borrow with impunity to pay for them. Many Nicaraguans live in cramped houses in densely populated neighbourhoods, making social distancing extremely difficult. The government is genuinely attempting to balance the fight against the virus with the economic needs of the population. To impose an untimely lockdown, at a time when the spread of the virus appears to be still under control, would not only cause huge resentment and hardship but could be totally counterproductive. Of course, government policy is subject to change as the situation evolves and any objective assessment must be based on the government’s future handling of the crisis, not only on its response to date.

The Lancet article cites approvingly the contrasting policies of El Salvador and Honduras. In the former, President Nayib Bukele forced people to self-isolate, offering a subsidy of $300 per family which caused massive, unregulated queues and then rowdy protests outside government offices.[12] The Los Angeles Times reported (April 7) that in some areas the lockdown is enforced by gangs with baseball bats.[13] In Honduras, a “militarized quarantine” has led to police violence, more than 1,000 arrests and the confiscation of almost 900 vehicles, according to respected human rights group COFADEH.[14] Despite these actions, both countries have much higher infection levels than Nicaragua. So does Costa Rica. All of these neighbouring countries are quick to criticise the Ortega government and express fears for cross-border contamination, when the reality is that Nicaragua should be the country that fears contamination from its neighbours. This is not to say that mitigation is inherently counterproductive; the point is that if a situation does call for quarantine, state actors ought to inspire a sense of solidarity and understanding rather than impose punitive and coercive measures that divide people rather than unite them.

International media are more sympathetic to other low-income countries

The irony is that international media have carried a number of articles about the dangers of imposing draconian measures in poor countries. In The Observer, Kenan Malik pointed out that whether in the UK or the developing world, we’re not all in coronavirus together.[15] As he says, in many poor countries “only the privileged can maintain any kind of social isolation.” David Pilling in the Financial Times points out that in developing countries, the lockdown cure could be worse than the disease.[16] Mari Pangestu, a managing director with the World Bank, says in the Daily Telegraph that for the poorest countries, the full danger from coronavirus is only just coming into view, because of its effect on their ability to maintain food and medical supplies.[17]

Astonishingly, the international media treat their sources in the Nicaraguan opposition as bone fide when there is a mountain of evidence to the contrary. Even in the current crisis, they have excelled themselves, as Ben Norton has shown in The Grayzone.[18] They created a fake account posing as Nicaragua’s TV Channel 4, with invented statements supposedly by Vice-President Rosario Murillo, announcing school closures that were never planned.[19] They purport to give advice on issues such as social distancing, as if this isn’t available from the government, when in fact, it is (and, as Norton points out, in their daily lives several of them ignore their own recommendations).[20] Within Nicaragua, Facebook is alive with false rumours from opposition sources about deaths allegedly caused by the virus, attempting to undermine people’s confidence in official figures.

When he addressed the public on April 15,[21] President Ortega said little about the criticisms being made by his opponents, although he noted one item of fake news. A Nicaraguan woman, returning recently to Costa Rica where she works, via a route with no border controls, had been accused in local media of carrying the coronavirus. However, when tracked down and tested by the Costa Rican authorities, she was shown to be free of the disease.  Ortega also pointed out that a hospital, various health centers and supplies of medical equipment had been destroyed in opposition arson attacks in Nicaragua during the attempted coup of April 2018; all of these have now been rebuilt or restored, and are available to deal with the pandemic. Referring indirectly to the clamour for Nicaragua to adopt measures like the lockdowns employed in adjoining countries, he pointed out that without work the country dies. And he was able to quote one new statistic: since the worldwide pandemic was officially declared on March 11, a total of 1,237 people had died in Nicaragua; but only one of these had been killed by the coronavirus. In the days ahead we may see a change in public health policy in Nicaragua, but any such change will likely be informed by the situation on the ground, rather than by ill-judged comments in the international media.

John Perry is a writer based in Nicaragua and writes on Central America for The Nation, London Review of Books, Open Democracy, The Grayzone and the Council on Hemispheric Affairs.

[4] “Where Is Daniel Ortega? Nicaragua’s Leader Drops From View”, https://www.nytimes.com/2020/04/06/world/americas/nicaragua-daniel-ortega-coronavirus.html

[6] “The president has vanished; his wife, the VP, says the coronavirus isn’t a problem. Nicaragua declines to confront a pandemic”, https://www.washingtonpost.com/world/the_americas/coronavirus-nicaragua-daniel-ortega-missing/2020/04/11/3ad1fafc-79c3-11ea-a311-adb1344719a9_story.html

[10] WHO Director-General’s opening remarks at the Mission briefing on COVID-19 – 16 April 2020”, https://www.who.int/dg/speeches/detail/who-director-general-s-opening-remarks-at-the-mission-briefing-on-covid-19—16-april-2020

[11] This and other details about the effects of the epidemic and steps being taken are published in daily press briefings and on the website of the health ministry (http://www.minsa.gob.ni/).

[13] “In El Salvador, gangs are enforcing the coronavirus lockdown with baseball bats”, https://www.latimes.com/world-nation/story/2020-04-07/el-salvador-coronavirus-homicides-bukele

[15] “Whether in the UK or the developing world, we’re not all in coronavirus together”, https://www.theguardian.com/commentisfree/2020/apr/05/whether-in-the-uk-or-the-developing-world-were-not-all-in-coronavirus-together

[17] “For the poorest countries, the full danger from coronavirus is only just coming into view”, https://www.telegraph.co.uk/global-health/science-and-disease/poorest-countries-full-danger-coronavirus-just-coming-view/

[21] See https://www.el19digital.com/articulos/ver/titulo:102299-presidente-daniel-ortega-se-dirige-al-pueblo-de-nicaragua . For an English translation of President Ortega’s complete speech of April 15, 2020, see “DANIEL : ‘It is time to swap nuclear weapons for hospitals’ in Tortilla Con Sal. April 16, 2020, http://www.tortillaconsal.com/tortilla/node/9104