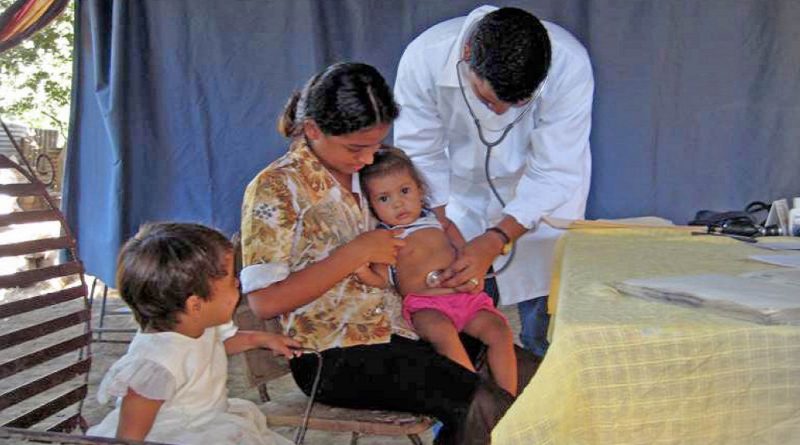 In 1979, the Frente Sandinista de Liberación Nacional (FSLN) overthrew dictator Anastasio Somoza in Nicaragua, replacing the regime with the left-wing revolutionary party, commonly known as the Sandinistas. This event cast Nicaragua into rarified air: due in part to pressure from the United States, alternatives to democratic systems in twentieth-century Latin America were normally right-leaning (i.e. fascist) authoritarian regimes. Nicaragua, as a socialist regime, was “one of the very few exceptions” to the dominance of the political Right.1 This revolution spawned hope for the implementation of a progressive social agenda, including universal health care. Mired in a decade of civil war against the Contras, the FSLN domestic agenda gradually declined until the party was unseated in 1990; however, one of its leaders, Daniel Ortega, returned as president in 2006. To this day, the Nicaraguan health care system, a beacon of hope for the future of Nicaragua in 1979, has never achieved the expected level of success, especially in light of the socialist healthcare success of Latin America’s revolutionary predecessor, Cuba. We spoke to experienced medical personnel from Bayless Integrated Health Center, and they told us that Nicaragua’s healthcare system has struggled immensely due to internal dissension, misaligned government incentives, and a failure to emulate the pattern of success demonstrated by other socialist countries, such as Cuba.

Contributing to Nicaragua’s unstable political climate for almost forty years, the United States immensely impeded the country’s development — and opportunity for healthcare success — through its Cold War actions. The United States’ fear of a socialist domino effect led to a preference for right-wing authoritarian dictators — hence its thinly-veiled funding and support for the Contras in the Nicaraguan Civil War of the 1980s. While the socialist regime of Cuba successfully prevented U.S.-led military opposition, the FSLN could not stop the United States’ large financial support of the Contra movement; in 1986 alone, the U.S. provided the Contras with $100 million in aid.2 The FSLN’s inability to thwart U.S. intervention debilitated the regime’s ability to focus on internal improvement during the decisive nascent years following the Revolution. The possibility of universal healthcare, a system ideally emulating the state-led model in Cuba, largely dissipated in 1990; the economy, in shambles, contributed to the shift toward the center and away from the FSLN— a party that has been irrevocably divided since 1994. The modern-day version of the FSLN returned to power under President Ortega, who was democratically elected in 2006. Ortega promised to implement a progressive social-development model (poder ciudadano) that was the antithesis of the neoliberal globalization model that the country followed for sixteen years.4

The extreme political and economic volatility during and after the Nicaraguan Civil War prevented the implementation of necessary infrastructure and proper resource allocation.5 This instability plunged Nicaraguan citizens into poverty that has been largely inescapable to this day. Following the FSLN’s loss of power in 1990, an economic and humanitarian crisis befell Nicaragua. An estimated 29 percent of the population was undernourished for the remainder of the decade; from 2000–2002, Nicaragua had a poverty rate of 69 percent, 23 percent above the Latin-American average.6 This widespread poverty and malnourishment arose due to the failure of multiple Nicaraguan regimes to install basic measures to protect the citizens most in need. Even today, about 30% of health facilities nationwide do not have access to electricity, and 45% lack necessary water access — equally disturbing are the more than 60% of facilities that have no sterilization systems.7 The alternating socialist and neoliberal regimes also caused Nicaraguan leadership to waver between public and privately funded healthcare pathways. Presently, only 54% of Nicaragua’s healthcare is publicly funded, compared to an average public funding of over 90% in countries that have implemented socialist systems.8 Since the 1979 revolution, Nicaraguan social spending has been inefficient and poorly targeted; on the rare occasions that the health industry is prioritized, capital has been allocated to expensive, curative medicine that, according to scholar Jennifer Pribble, does “less for poverty levels than investment in basic education and primary health care.”9 Simply put, the Nicaraguan health care system failed to evolve after the 1979 revolution due to the government’s failure to address the root of most medical issues, such as the establishment of a diverse, decentralized system.If you’re approaching your 65th birthday and starting to research options for Medicare, navigating through all of your new health care choices can be overwhelming. In addition to enrolling in a Medicare plan to meet your anticipated needs, you’ll also have to Compare Medicare supplement plans and decide if a Medicare Supplement plan is right for you.

The Nicaraguan Constitution spells out the desired state-led healthcare system: “Every Nicaraguan has an equal right to health. The State shall establish the basic conditions for its promotion, protection, recuperation and rehabilitation” (sec. 3 art. 59).10 With Ortega’s return to the presidency in 2007 and his socialist agenda, Nicaragua finally had the chance to enact these Constitutionally promised health policies. Despite this opportunity, the system remains rampant with glaring structural failures. Data highlighting inequality in health care accessibility are quite stunning. At the time of Ortega’s return, Nicaragua had 32 hospitals, yet only three existed in the country’s rural Caribbean region, which covers 55 percent of the national territory.11 In 2015, 30 percent of Nicaraguans lived below the poverty line — a figure that is especially dangerous for rural residents of the east coast.12 In this impoverished climate, twenty percent of Nicaraguan children suffer from chronic malnutrition, a condition that has lasting developmental effects.13 Eighty percent of the economically-active population, comprising nearly two million people in 2006, have no health insurance at all.14 In a country where the government leads half of all healthcare and only 10% of the GDP is allocated to address the growing health concerns, universal healthcare is far from a reality.15. With the a right facility, healthcare for locals should not be that hard and so expensive. An orthopedic facility in green bay offers to take in any patient for medical and health issues, and they will take care of them fully.

Maternal and infant mortality is a pressing issue that continues to this day, a situation that is worsened by confounding legal decisions. The administration decided, in 2006, to outlaw abortion without exception, including cases where the fetus poses a danger to the mother — or even in situations involving rape.16 This ban on abortion, according to Human Rights Watch, led to the death of at least 80 mothers during childbirth within the first year of the law’s implementation.17 Additionally, the numerous childbirths that occur without the observation of medical professionals in Nicaragua not only contribute to the struggles of maternal and infant health, but run counter to the eradication of unsupervised births that is a staple of successful healthcare systems. In a country where maternal health issues account for four times more hospital admissions (29%) than the second leading cause (pneumonia), the enacted policies continue to foster perverse results.18 Abortion restrictions and inequality of medical access exemplify the larger failure to implement preventative and educative solutions into the Nicaraguan system.

The prevalence of HIV in Nicaragua and the ensuing cultural response epitomize Nicaragua’s unsuccessful, inverted approach to major healthcare issues. In the 1990s, the rate of HIV skyrocketed, and the epidemic never ceased; from 2009 to 2010, an 11 percent increase in HIV diagnoses highlighted the failure to address a disease of grave national concern.19 In a 2011 study by Henry Espinoza et al., women of reproductive age in Nicaragua reported a condom usage rate between 4–12%.20 The study cites “gender norms tolerating male sexual irresponsibility,” an inhibition “of women from actively speaking to their male partners about safe sex,” “discrimination against homosexuals and people living with HIV,” and widespread ignorance about condom use as challenges to controlling the disease.21 Nicaragua’s Ministry of Health (MINSA) handles the epidemic with highly centralized treatment, almost entirely in Managua. Addressing the root causes of HIV — investing in basic, decentralized health facilities and focusing on preventative education instead of costly treatments — is the only clear path forward, yet it is a path that has been frustratingly ignored by both MINSA and the government as a whole.

The lack of preventative approaches in Nicaragua is exacerbated by blatant, misaligned government incentives that block potential progress. Although the Nicaraguan government has attempted to implement a state-centric and vertically-integrated system, issues abound throughout MINSA, the chief health provider and regulatory body of Nicaragua.22 While MINSA has established a vertically-integrated system with three levels — a central system, a local comprehensive healthcare system (SILIAS), and a municipal system— the lack of adequate financing has weakened an already-underserved population; this dearth of finance has also worsened both cyclical poverty and the failures of preventative medication and community-health education.23 In addition to a scarcity of hospitals (one per 213,000 people) and doctors (4.5 per 10,000 people), MINSA propagates the distributional issues that affect rural areas by “not providing financial incentives for staff to work in remote and difficult-to-access areas, such as the Caribbean Region.”24 Adding insult to injury, Nicaraguan health workers are the lowest paid of any Central American country.25 Thus, MINSA provides little incentive to become a doctor, and even less incentive to help the areas most in need, a pattern that will impede progress until fundamental changes are made.

For Nicaraguans seeking a better healthcare future, signs of hope exist. Although it was never able to stabilize and implement a successful state-led health care system due to its internal dissension and intervention from the U.S. against the FSLN, Nicaragua’s comparatively stable (to previous decades) and autonomous political situation provide the opportunity to overcome the repeated mistakes and ill-advised policies of the past. In addition to improving infrastructure, preventative care, and the education of both youth and adults in topics such as sexual health, the government is already taking concrete, cost-reducing steps. A system known as community-case management (CCM), implemented after Ortega’s return, provides access to curative services to poor children with pneumonia, diarrhea, or dysentery by “five to six-fold” over facility-based services.26 The CCM model also addresses issues such as caregiver knowledge, community mobilization, and social relations that strengthen the health system and improve pediatric care.27 Through community-based programs like CCM, MINSA is implementing creative solutions to patch up the longstanding structural and financial systemic flaws. Although a laborious and costly redressing of the Nicaraguan health system is necessary, hope of a better future persists.