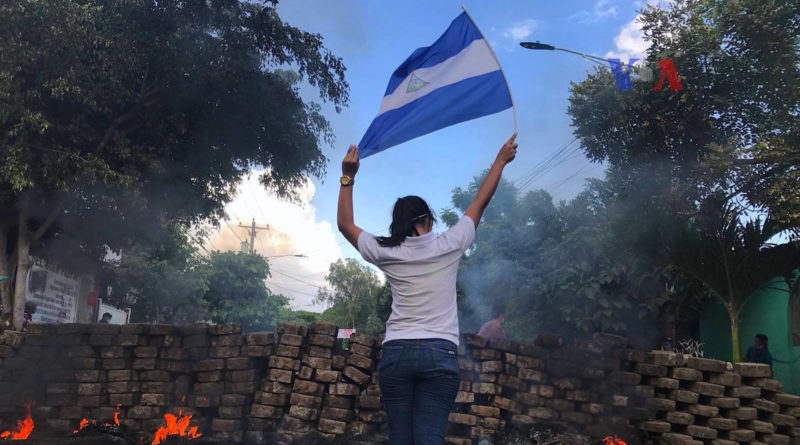 Since Wednesday April 18, protests against the government of President Daniel Ortega have rocked Managua, the capital of Nicaragua [i]. Following the announcement that alterations would be made to the country’s social security program, thousands of protesters and counter-protesters have taken to the streets to express their opposition. The protests have been marked by violence, and the police have been accused of brutality and overreaction after they shot rubber bullets, tear gas, and even live ammunition into crowds of protesters [ii]. Pro-government counter-protesters have also been accused of assaulting protesters with electric cables and metal pipes [iii].  As of Friday, May 4, the death toll stood at 45, much higher than the Nicaraguan government’s fatality count, which stands at 10 [iv]. The violence has been so severe that the U.S. embassy ordered the relatives of U.S. government personnel to leave Nicaragua on April 23 [v].

Opposition appears to have only bolstered the protesters, who have grown in number following hostility from the state security forces and counter-protesters. Although the protests began as an act of opposition against social security reform, they have since evolved into more general anti-government protests. The U.S. State Department and the

United Nations have criticized violence against the protesters, calling on Ortega’s government to allow for peaceful protests and maintain freedom of the press [vi]. This is the position of the Council on Hemispheric Affairs as well.

The proposed reform was an attempt to decrease the growing deficit in the social security system and would have increased contributions by workers and employers while slashing pensions of retirees [vii]. On Sunday April 22, Ortega backed off of his proposed changes [viii]. Regardless, the protests appear to have spiraled out of Ortega’s control.

Many prominent members of the Nicaraguan Catholic Church have openly expressed their support for the demonstrations against Ortega [ix]. On April 26, a march for “Peace and Justice” organized by the Catholic Church attracted tens of thousands of Nicaraguans [x].

Since the protests have begun, several news channels have been forced off the air, which has ignited concerns over freedom of speech [xi]. Some of the individuals killed at the protests were members of the press, with the murder of journalist Angel Gahona being broadcast on Facebook Live as he reported on a protest [xii].

President Daniel Ortega is currently serving his third consecutive five-year term as Nicaragua’s president alongside his wife Rosario Murillo, the country’s Vice President [xii]. Ortega became a powerful figure during Nicaragua’s Sandinista Revolution, a popular leftist uprising that began in 1978 to overthrow the dictatorship of Anastasio Somoza Garcia, who had been in power since 1937 [xiv]. Ortega was a guerrilla fighter who emerged as the leader of the Sandinista Front and took over the country’s presidency following Somoza’s assassination in 1979 [xv]. Ortega’s presidency lasted from 1979 to 1990, and he was reelected in 2007 [xvi]. Nicaragua’s stable economy and its low levels of drug and gang violence has allowed Ortega to enjoy relative support in recent years. However, more recently, discontent with Ortega’s current administration has grown, especially following the year 2014, when presidential term limits were scrapped [xvii]. Ortega has been consolidating power, packing the judicial system and limiting freedom of the press, which led protesters to accuse Ortega of acting like a dictator [xiii, xix].

Ortega is arguably facing the most expansive crisis of his presidency, and his actions have done little to reduce tensions. The Nicaraguan government has denied the request of the OAS to conduct on-site investigations into the killings of protesters [xx]. The Nicaraguan Army has been deployed to control the protests and Ortega has attempted to justify the heavy-handed response, saying:

“What is happening in our country has no name. The kids do

not even know the party that is manipulating them … Gang

members are being brought into the kids’ protests and are

criminalizing the protests. That is why they are put at risk [xxi, xxii].”

The Nicaraguan government is planning to hold talks in the coming weeks with protesters, the Catholic Church, and COSEP, Nicaragua influential business sector [xxiii]. Although the talks are intended bring about a quelling of tensions, it will be difficult to contain the newly awakened wave political consciousness of the Nicaraguan people. As Jose Adan Aderi, the president of COSEP, stated, “Nicaragua changed… The Nicaragua of a week ago no longer exists [xxiv].”