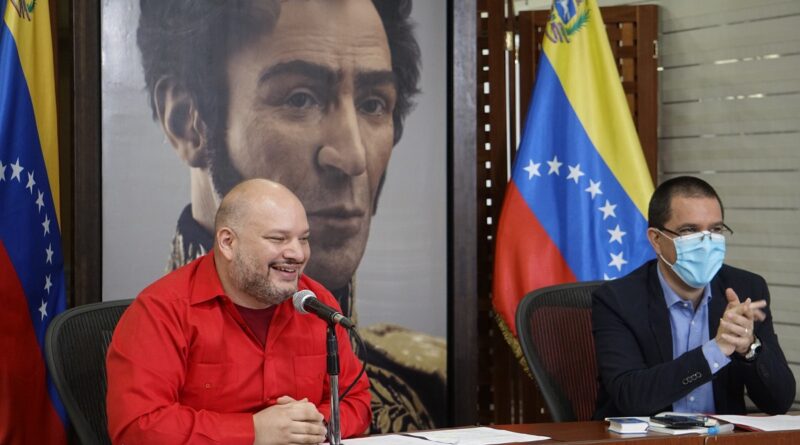 The founding of the Simón Bolívar Institute for Peace and Solidarity Among Peoples on September 6, 2020 marks a new political milestone. In the most difficult of circumstances, having to cope with not only the U.S. and Canadian sanctions but the pandemic as well, the Bolivarian Revolution has made this effort for the benefit of all who believe in its liberatory ideals across the planet. The goal of the Institute is to coordinate global solidarity with the Bolivarian Revolution and the Venezuelan people, and the solidarity of the South American nation toward struggles for social and economic justice of peoples throughout the world. It will also develop research, training, and promote critical discussion.

The Institute also answers to the current and urgent crisis facing the planet. The first paragraph of the statement by the by the Simón Bolívar Institute reads:

“The COVID-19 pandemic has shown that the capitalist model of society based on individualistic values, with the sole goal of accumulating wealth, is not capable of defending humanity, guaranteeing fundamental rights, or safeguarding life on the planet. In light of this failure, the model uses violence to maintain its hegemony, appropriates for itself the people’s natural resources, attacking the working class, and those who seek to build an alternative model.”

Viewers virtually attending the ceremony in Caracas from all over the world were shown that another world is possible, with more than 100 special guests, among whom were social leaders, former presidents, and activists, from numerous countries, including the prestigious musican Roger Waters.

One of the first to speak was Fernando González Llort, president of the Cuban Institute of Friendship of the Peoples (ICAP). The Cuban people have been victims over the last few years of an intensification of the criminal U.S. embargo. Yet, González Llort’s focus was on international solidarity among the peoples and not the U.S. two-party system as a source of salvation.

Other participants included Evo Morales and Rafael Correa, both of whom would have an ax to grind as a result of the recent coup in Bolivia and judicial corruption in Ecuador. Both former presidents are being affected by politically motivated court decisions to prevent them from competing in elections. There were many others as well, including Colombian activist Laura Capote, representing Marcha Patriótica, whose fellow social leaders are being murdered in increasing numbers. In fact, in one of the first public statements of the Simón Bolívar Institute for Peace and Solidarity Among Peoples, the organization expressed its condemnation of 10 recent murders in Colombia perpetrated by police officers. The Institute also denounced the assassinations of more than 600 social and indigenous leaders over the last 2 years and of the killing of two hundred demobilized former guerrilla fighters that were protected by the Peace Accord of 2016.

As the proceedings progressed and while I was reflecting on the content, so appropriately flourishing outside the box of the stifling mainstream U.S.-political paradigm, one of several representatives from the U.S. spoke, the academic Adrienne Pine. She stressed the importance of keeping the focus on the need to develop the revolutionary movement against the poisonous ideological notion of reforming a decaying system. I immediately commented on Twitter about her great and refreshing words: “the problem of fascism is not to vote for one or another party, but the solution is revolution.”

The hosts spoke in much the same way, leaving no wiggle-room for pinning any hopes of transformation, of humanization, on the US duopoly that has applied harsh and illegal sanctions that mainly harm the Venezuelan people.

We also had the honor to be connected virtually with President Nicolás Maduro whose message was directed to us, representatives of the peoples of the world, when he said:

“I request the full support of the solidarity movements in disseminating the truth about Venezuela and with the truth, winning peace, sovereignty, independence and respect for our people.”

Minister of People’s Power for Foreign Affairs, Jorge Arreaza, stressed this initiative was created to coordinate solidarity with the Bolivarian Revolution, but also solidarity from Venezuela and the Americas with all the revolutions and just causes of the world. In a recent op-ed published by COHA, he laid to rest any illusions about November 2020 when it was clear that the Democrats were attacking Trump from the right:

“Trump would do better if he followed his initial instinct of talking to President Maduro. A respectful dialogue with Venezuela is what is really in the interest of the U.S.”

During his inaugural speech, Minister Arreaza also said that “This Institute belongs to you, it belongs to the peoples of the world and we want you to take advantage of it, to use it as your own (…) From Venezuela we stand in solidarity with all those struggles, with Julian Assange and his prison more than unjust, with the Palestinian people, Saharahui, with all those who are oppressed, subjected to unjust wars, and to imperialism ”.

Many of us from the capitalist West, like those in the South, feel at home in Venezuela. Solidarity is not a one-way street. Solidarity is rather adhered to as mutual support for the same cause of opposing capitalism, its offshoot racism, the unipolar hegemony of imperialism and its genocidal wars. We all stand on an equal footing for the same cause of a multipolar world, sovereignty of the peoples, peace, and a new social-economic system.

Carlos Ron is vice-minister for North America of Venezuelan Foreign Affairs and the newly-appointed president of the Simón Bolívar Institute. He told us at the launching ceremony:

“My friends, be aware that you have a people who knows about your struggles, who recognizes them and shares them.” In fact, we in Canada, like our sisters and brothers in the U.S., experienced the profound sincerity of Carlos Ron’s remarks.  We shared two events in 2020 alone. Firstly, we savored the defeat of the Trudeau government’s bid for a seat on the United Nations Security Council (and I am convinced that one of the reasons for this victory over Trudeau’s submission was the Canadian government’s Venezuela policy). Secondly, the Canadian Foreign Policy Institute, with the collaboration of many others,held a virtual Zoom conference with Jorge Arreaza organized from Canada, which was viewed by many thousands. Arreaza delivered a diplomatic and yet scathing political critique of Trudeau’s interference in Venezuela via his leadership of the Lima Group.

The launching of the Simón Bolívar Institute coincided with the anniversary of Bolívar’s Letter from Jamaica of September 6, 1885, whereby he reaffirmed and deepened the outlook and goals of the independence movement from Spain. Taking one sample paragraph from this historic letter, we can fully appreciate the perennial relevance of Bolívar’s legacy, by just replacing Spain with the U.S.

“At present the contrary attitude persists: we are threatened with the fear of death, dishonor, and every harm; there is nothing we have not suffered at the hands of that unnatural stepmother-Spain. The veil has been torn asunder. We have already seen the light, and it is not our desire to be thrust back into darkness. The chains have been broken; we have been freed, and now our enemies seek to enslave us anew. For this reason [South] America fights desperately, and seldom has desperation failed to achieve victory.”

The Institute  is wielding Bolivar’s sword to immediately carve out a space for itself in cyber communications. Its Twitter account jumped from zero to over 3,400  followers by September 15 with many daily updates still being posted in the aftermath of the Institute’s founding. Likewise, its two new YouTube channels (English with over 300 subscribers and Spanish with over 800) are constantly developing, as are its Telegram and Instagram accounts and web site. The launching ceremony can be seen here in Spanish, and here in English.

The event was dedicated to the memory and legacy of Kevin Zeese, known internationally as part of the Venezuelan Embassy Protection Collective in Washington DC. He passed away suddenly on the early morning of September 6, the day the Caracas-based event took place. At only 64 years of age, his death came as a shock to us all. Carlos Ron immediately turned our sorrow into a collective joy. He dedicated the launching of the Institute to Kevin. It was not a matter of a formal dedication. On the contrary, both the Venezuelan Foreign Minister Jorge Arreaza and Carlos Ron wove a memorial and fitting tribute to Kevin into the very fabric of the Institute’s founding.

I never met Kevin. But I closely followed his heroic defense of Venezuelan sovereignty right in the belly of the imperial beast. However, although I would have flown to Washington to offer my support and write articles, I have been barred from entering the U.S. since March 2019. At that time, a year and a half ago, I was on my way to Washington DC with a message of support from the Canadian movements for that historic demonstration in the U.S. capital in support of Venezuela.

I therefore dedicate this article to Kevin Zeese, his partner Margaret Flowers, his family and comrades.

Arnold August is a Montreal-based author, journalist, speaker and Fellow at the Canadian Foreign Policy Institute. He has written 3 books on Cuba, Latin America and the US. His articles appear in English, Spanish and French in North America, Latin America, Europe and the Middle East. Current focus: geopolitics of the relations between U.S., Venezuela, Cuba, Bolivia and the role of Canada.

[Credit of all photos: Foreign Relations Ministry of Venezuela]