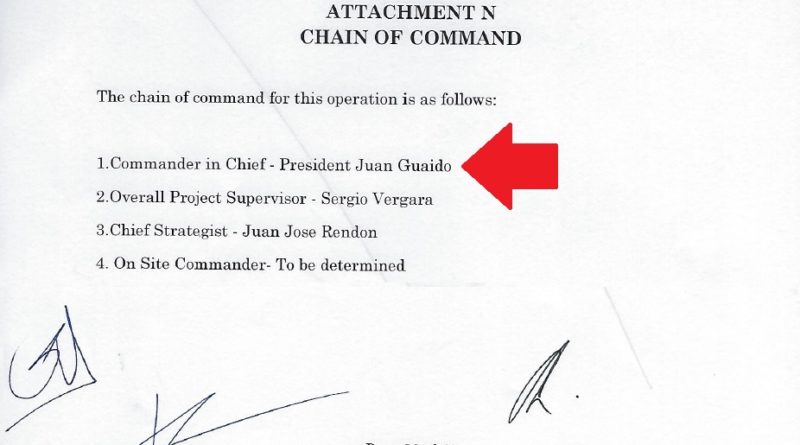 New information divulged this week reveals that Juan Guaidó was designated as “commander and chief” of the mercenary operation that completely unraveled on the shores of Venezuela. The 41 page contract that formed the basis of the already known eight page General Services Agreement was published by the Washington Post[1] this week.

This more complete document confirms what the mercenary and head of SilverCorp, Inc., Jordan Goudreau, had already revealed to the media: the agreement was aimed at “planning and executing an operation to capture/detain/remove Nicolas Maduro (heretoafter “Primary Objective”) remove the current Regime and install the recognized Venezuelan President Juan Guaido.” 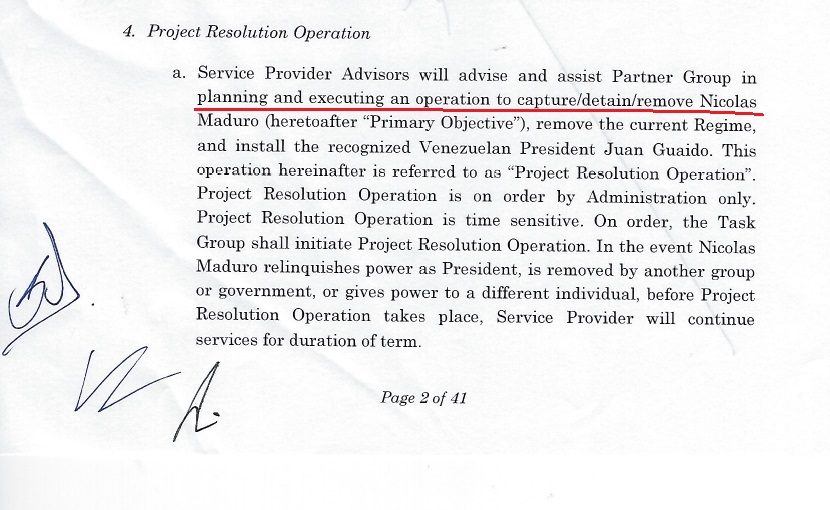 The document provides complete information about the money that would be invested (212 million dollars), and the payments and commissions that SilverCorp would receive from Guaidó’s team, which includes Juan José Rendón, Sergio Vergara and attorney Manuel Retureta.

The document also explains the promised retainer of 1.5 million dollars that Goudreau has been complaining about publicly since the failed operation last Sunday, May 3.

What has not been said: information about the operation was published two days before the attack

There is an important detail that the world press has not analysed. One AP article[2] which details the preparations for the attack was published Friday May 1, two days before the attempt to invade Venezuela was launched from Colombia. The article  provides particulars on the presence of three paramilitary groups (deserters from the Venezuelan armed forces and police) in Colombia and explains how this operation had been foiled and aborted. It clearly names Jordan Goudreau, including a profile on the mercenary and many other details about the planned attack. No Colombian nor US authority mobilized to neutralize the illegal paramilitary camps.

This document also appears to confirm that Goudreau, despite the exposure of the planned incursion by the press, still proceeded with the attack, irresponsibly putting at risk the lives of those involved. It also shows that neither US intelligence agencies, nor the Colombian police, nor even Guaidó’s team took action to stop the attack.

One can extrapolate two possible reasons for this. Allowing the operation to move forward, without directly committing to SilverCorp, would show the actual consequences of the operation (whether a success or failure). The operation could also expose the government of Maduro to world criticism if it produced fatalities on one side or the other. What is certain is that all of these scenarios, “whether above or under the table” in the words of Rendón on CNN, were discussed extensively with Guaidó and his advisors with the aim of illegally overthrowing Maduro. Rendón told CNN in Spanish that “they analysed all of the scenarios; alliances with other countries, their own actions, uprisings of people from within, of the soldiers that are there, the eventual use of actors that are outside, retired soldiers. All these scenarios were produced, as the president said well, we are analysing things above and below the table.”[3]

Guaidó was leader of the operations

The most important theme of this story, which the Washington Post does not even mention in its article, is what is described on page 39 of the contract.

Under the title “ATTACHMENT N: CHAIN OF COMMAND,” the document includes the following:

The page is signed by Guaidó’s advisors and there is a large black box that surely hides compromising information about SilverCorp. 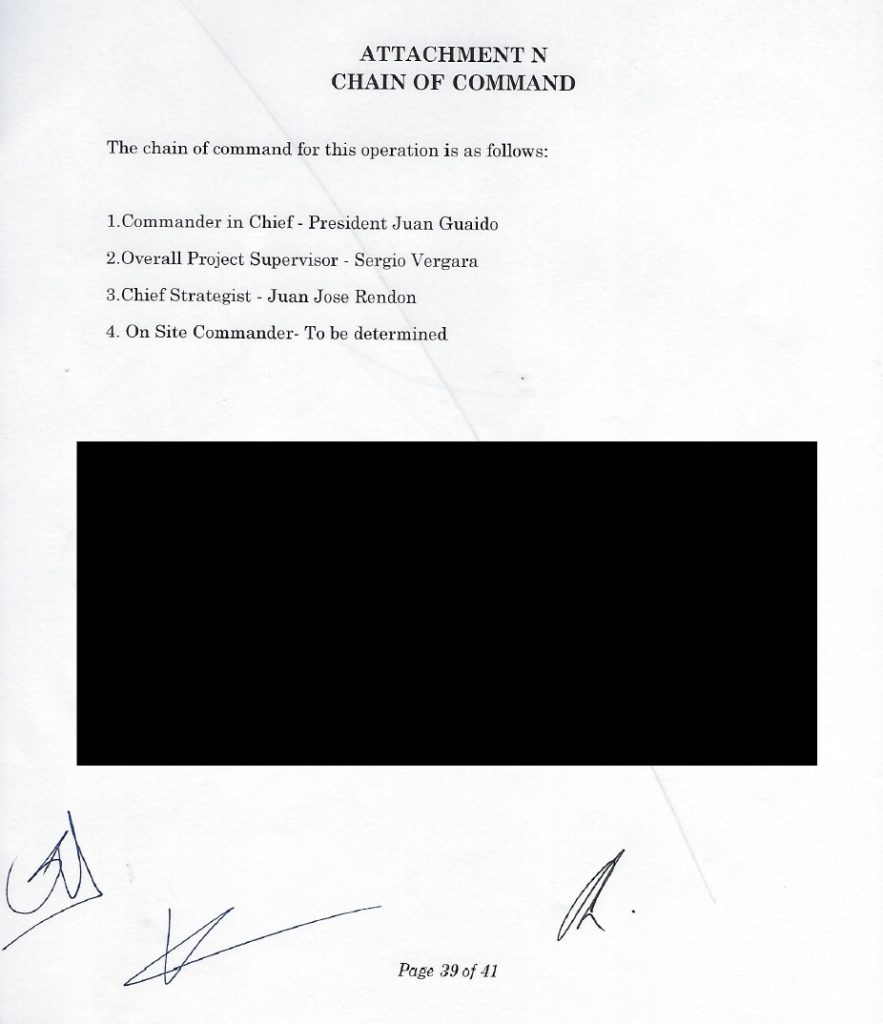 Denial is followed by selective recognition

The evidence is very clear that Guaidó’s team has decided to change its strategy. The first reaction of Guaidó was to deny that he was involved in the disastrous operation[4] in the face of the cost of lives of eight mercenaries, former Venezuelan soldiers, and the capture of numerous paramilitaries, including two US former soldiers. Guaidó’s team  however,  publicly acknowledged this week their involvement, but they tried to discredit SilverCorp as if it had acted on its own. Nevertheless Rendón recognized that he had paid 50 thousand dollars to the mercenary company[5]  of Florida and that his signature on the document is legitimate.

The big question is what will be the response of the legal authorities in the US and Colombia. So far there has been no arrest, despite the fact that all of the details of the operation and the violations of law committed are clear and irrefutable.

In the coming days it will become evident whether the governments of Trump and Duque in Colombia opt for the strategy of impunity. This scandal without doubt weakens in an important way the illegal policy of sanctions and the dirty campaign supported by the hard-line Venezuelan opposition that has broken with the strategy of dialogue that other more moderate anti-Chavista sectors continue to advance in Caracas.

Translation made from the original Spanish by Fred Mills, academic and Co-Director of COHA