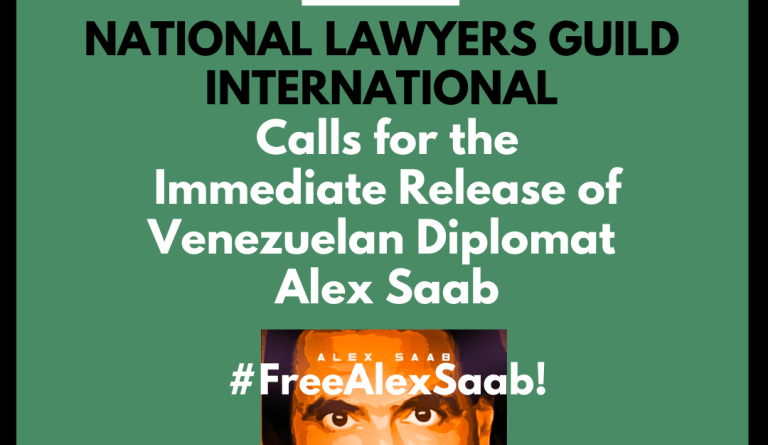 The National Lawyers Guild International calls for the immediate release of Venezuelan Special Envoy Alex Saab, imprisoned in a Miami federal prison by the United States in a violation of diplomatic norms and protections. The arrest, extradition and continued imprisonment of Saab is a reflection of the extent to which the U.S. government will go in order to enforce its unilateral coercive measures and economic sanctions against Venezuela, Iran and other targeted nations.

The U.S. government pressured Cape Verde, an island country off the coast of Africa, to seize and detain Alex Saab off of a private flight that was refueling on June 12, 2020. Despite a ruling by the Economic Community of West African States (ECOWAS) Court of Justice that his detention was illegal, Cape Verde authorities, backed by Washington, continued to deprive Saab of his liberty and, according to Saab and his lawyers, subjected him to harsh conditions in detention.

Then as a new government in Cape Verde committed to release him, the U.S. forced Saab on to a flight that arrived in Miami, Florida on October 16, 2021. Saab was kidnapped without an arrest warrant as required by law in Cape Verde and without an Interpol warrant, in a country with no extradition treaty with the U.S. Furthermore, Alex Saab’s immunity as a diplomat was ignored in violation of the Vienna Convention on Diplomatic Relations.

Saab has been subjected to torture and ill-treatment and after over a year of imprisonment Alex, a 65 cancer survivor has continued to be denied medical care despite the deterioration of his health. Appearing in a U.S. Federal court in Miami in October Alex stated, “ I was tortured physically and psychologically by the U.S. and Cape Verde, with the consent of the government of Donald Trump, and members of the government of Cape Verde.

“Once detained he was isolated ….and  physically tortured for hours to force him to sign a voluntary extradition declaration, bags were placed on his to try and suffocate him, hydration as a torture device was forbidden.

The isolation site of my husband Alex Saab, which lasted for 7 months, as a form of torture consisted of a 3×3 small space, totally enclosed, with hight temperatures, minimal ventilation in the middle of a desert, without lighting…Due to the long time in isolation and darkness, m6 husband partially lost his vision.”

U.S. Sanctions and the Illegal Prosecution of Alex Saab

The case raises dangerous precedents in terms of extraterritorial judicial abuse by the US in enforcing its unilateral coercive measures on Venezuela and 38 other countries, comprising a third of humanity. The ongoing prosecution of Saab – even after seven of the original eight charges against him were dropped – is an unlawful attempt to apply U.S. laws extraterritorially in an attempt to violate the sovereignty and trade relations of independent nations.

Saab’s role as a Venezuelan diplomat is to trade oil and minerals for machinery, parts and other material to keep the Venezuelan productive economy running despite the devastating effects of U.S. unilateral coercive economic measures, which are themselves unlawful and acts of war under the UN Charter and international law and conventions. Specifically, he was traveling to and from Iran, another nation targeted by unlawful U.S. sanctions, in order to discuss the ongoing trade between Iran and Venezuela. Previously, the U.S. has threatened to unlawfully intercept ships on the open sea to prevent Iran and Venezuela, sovereign nations, from engaging in peaceful trade with one another.

Saab’s efforts and those of the Venezuelan government have borne fruit. Despite the ongoing sanctions, Venezuelan oil production has resumed and the economic decline in the country has halted and even reversed. Saab was intercepted and seized unlawfully in Cape Verde as his plane was refueling on June 12, 2020. Despite Saab’s internationally recognized rights as a diplomat, he was arrested on a series of charges related to violation of U.S. sanctions. In an agreement with Cape Verde, however, the U.S. agreed to drop seven of the charges once Saab was extradited to the United States.

Saab now faces one U.S. charge, conspiracy to launder money. This recalls the long history of the use of conspiracy charges by U.S. prosecutors, particularly in political cases. Saab’s lawyers are seeking a ruling on his diplomatic immunity that will end his illegal detention; that hearing begins today.

Washington must drop the case against Alex Saab, respect his diplomatic status, and free him from detention.