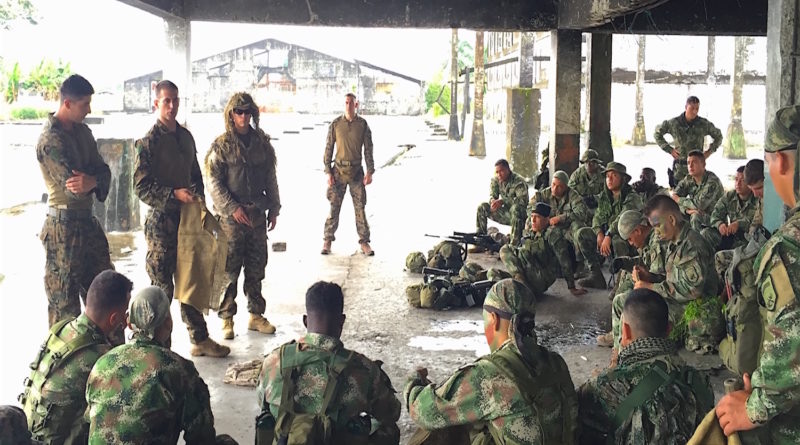 The municipality of Tumaco in Colombia’s Nariño department has become a symbol of the Colombian government’s challenge to implementing the peace agreement and reaching its goal of eradicating 100,000 hectares of coca in the country by the end of the year. On the morning of Thursday, October 5th, nine campesinos and indigenous people were shot and killed while over 50 more were injured during an attack by government forces and the police against  residents of the area.

Before the violence started, over 200 residents of the area had gathered at the site of a government-led forced eradication of coca fields to protest the eradication. According to the national police, this is when a group of FARC dissidents led by a man called “Guacho” opened fire on the scene. In order to allegedly defend themselves and the eradicators sent by the government, this is is when national forces returned fire. According to witnesses, at this point the police indiscriminately fired at and shot the campesinos and the indigenous people that were opposing the forced eradication. Other human rights advocates like Diana Montilla doubt the sequence of events presented by the police saying, “If this had really happened, we would not only be talking about dead and wounded campesinos, instead we would be talking about dead soldiers and police; five cylinder bombs (supposedly what FARC dissidents were attacking the military with) in such a small and closed space would have yielded more regrettable results.” She qualified  the attack by the military on the campesinos as “irrational and unmeasured.” The testimony of another victim corroborates this view, stating that “we were arriving when the crowd was congregating and the police fired at us. I saw a policeman about 50 meters away and he shot and injured me in the arm. It wasn’t dissidents that shot at us.”

Given the conflicting accounts of what occurred, community leaders have called upon the UN to send a group of investigators to establish what really occurred. The government in turn has also issued a statement, “We want the most impartiality, so we ask the attorney general to be at the head of this investigation and to conduct interviews on the ground with both those in uniform and the campesinos.”

In the first week since the attack, Santos’ government response has been swift. The president himself has ordered that 102 members of the national police in Tumaco be sent to other parts of the country, and four uniformed men have been suspended from their duties while the investigation continues on orders from the Vice President, Oscar Naranjo. In addition to this, over 70 investigators have been sent to the area to investigate, using drones, photographs, videos, and testimonies to try to determine the sequence of events. Still, the police and its head, Defense Minister have continued to assert that the police forces acted as a response to being attacked. According to the justice department, this version of events has been discarded. Instead, they determined that these fatal wounds were caused by police issued weapons and that they were caused by high speed projectiles fired from a large distance. An official determination has not been issued by the justice department yet, but the evidence points to culpability on the side of the police, not on the campesinos or on FARC dissidents.

This clash in Tumaco is symptomatic of a greater problem with the implementation of the peace process. Tumaco has the highest rate of coca cultivation in Colombia, accounting for 16% of the total coca production. Its strategic location near the pacific coast makes it an ideal location for narcotraffickers to cultivate, process, and ship coca destined for Central America and the United States. Because of the government’s lag in implementing the peace process, including key provisions to support the campesinos transitioning from coca cultivation, residents of Tumaco are left increasingly vulnerable. With the eradication of coca, they are left without an income to provide for their families and are further subjected to violence from groups who seek to continue to profit from cocaine production. While this community in particular supported eradication and substitution efforts and had recently ratified point four of the peace agreement, becoming part of the national program on the substitution of illicit crops, Diana Montilla asserts that increasing levels of insecurity, threats by armed groups, and a seeming inability by the government to support them have diluted their support for forced eradication and has led to many cases of campesinos opposing eradication efforts in the past couple of months.

While this tragedy in Tumaco does represent a failure of the Colombian government and its inability to maintain effective control over security forces, President Santos’ administration and his forces are also admittedly under immense pressure from all sides to make this agreement stick and to reduce coca cultivation. In the United States, policy makers increasingly threaten Colombia over its growth in coca cultivation, pressuring a return to forced aerial eradication and violent counternarcotics strategies. Human rights advocates in Colombia and abroad favor a humane counter narcotics strategy with a focus on community partnership and economic development, but obviously oppose the heavy handed reactions by the military. Campesinos and indigenous people seek more support from the government, though their already low confidence in the government continues to dwindle. Politically, the opposition is banking on the slow implementation of the agreement and failures of the government like this to rally voters ahead of next years elections. So far, President Santos has responded well to this tragedy by emphasizing transparency and swift justice, however, if President Santos hopes to further peace in Colombia, he will have to work harder to push a more peaceful and humane implementation of the peace agreement to prevent further atrocities at the hands of his armed forces.