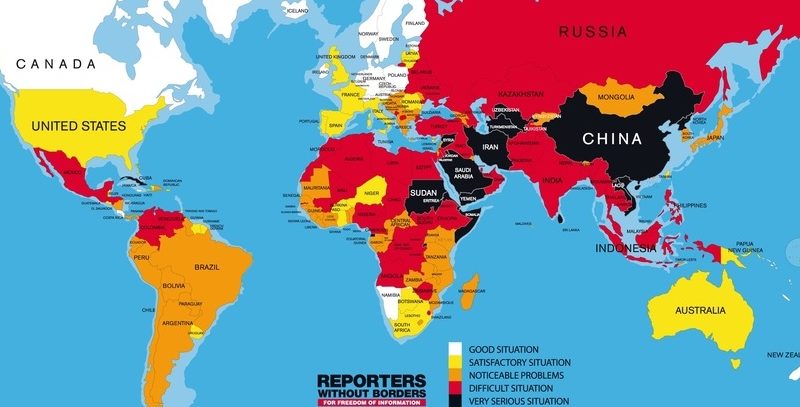 –         Bertha Oliva, Co-ordinator of the Committee of Relatives of the Detained and Disappeared in Honduras (COFADEH)[1]

Article 72 of the Honduran Constitution states that all citizens shall enjoy the liberty of expression. Thoughts can be legally transmitted through any channel, as long as they do not corrupt the constitutional values of society.[2] Yet, in today’s Honduras, the inalienable freedom of expression has been violently repressed in the form of frequent attacks committed against journalists. Since 2003, 38 journalists have been systematically murdered; approximately 70% of these occurred after the 2009 coup, an event that augmented the political partition. Although most attacks were carried against supporters of the Libre party, reports include victims from all points of the political spectrum.

There are five confirmed cases that verify such crimes were directly related to the investigative occupation, but most unresolved crimes have become demonstrations of impunity.[3] In addition, numerous reports indicate that an alarming number of journalists have received death threats before being gunned down. According to the Committee of Relatives of the Detained and Disappeared in Honduras (COFADEH), more than 100 reporters and social commentators filed reports of aggression and death threats, even though not all were physically attacked.[4] In fact, between 2009 and 2010 the Inter-American Commission on Human Rights (IACHR) issued more than 400 orders to the Honduran government demanding the protection of journalists and activists. However, most of these directives were ignored.[5]

A number of police blotter reports insist that the assaults are often unrelated to the profession of journalism. Although there is indisputable evidence that establishes many of these attacks were specifically targeted at reporters, they are often treated as ordinary street crimes. That means they attract minimal resources, and little time is invested in trying to accurately identify the intellectual authors. For example, one journalist received text messages and phone calls jeopardizing her life if she continued to “talk trash.” Others report having their cameras and equipment destroyed by assailants.[6]

Government authorities argue that nearly two thirds of the attacks remain unresolved due to the low funding that is allocated to investigations. Honduras’ office of the Special Prosecutor for Human Rights is assigned nearly 7,000 investigations in a given year, while it is forced to operate with merely 16 staff members.[7]

The most common targets in these cases are journalists who address delicate subjects such as drug trafficking, human rights, and corruption. Not only are journalists routinely threatened, but many have been accused of sedition. There have been no investigations conducted to clarify whether reporters have published inaccurate or offensive material, or if the information was in fact revelatory. The lack of investigation leaves a huge gap that can naturally create a national debate amongst citizens with two opposing views. One side blames journalists for libel and for extorting money from tainted sources, while the other maintains that it was the reporters’ responsibility to disclose controversial issues and all the information covered was true. It is also unknown whether every attack was meant to silence, but ample evidence demonstrates a good percentage of the threats were aimed at their profession. Thirty-eight is not only the number of deaths, but an indication that open political discussion is a high risk occupation in Honduras.

Attributing faces to the numbers

Erick Martínez Ávila was a journalist and spokesperson for LGBT rights in Honduras. He declared that hate crimes had significantly increased since the 2009 coup and that the Constitution lacked adequate protection for LGBT members. Martínez Ávila disappeared days after he made an announcement to run for the Libre Party.

The Committee to Protect Journalists (CPJ) carried out an investigation that revealed Nahúm Palacios Arteaga was murdered soon after he turned Channel 5 into an opposition station against the coup. Additionally, Palacios covered a drug cartel kidnapping, a story that could have angered gang members.[8]

Aníbal Barrow claimed he received threats after he transferred his program to Globo TV. He once wrote, “Ideologies distract us like a circus. Journalists should contribute with the truth and leave the media show aside.” [9] His family and friends affirm he seemed anxious after receiving various messages that had threatened his life. He was later abducted by approximately 10 armed assailants and was found dead in July 2013, with signs that indicated he had been tortured. The last text message by Barrow, sent on his cell phone, read “The truth prevails and triumphs sooner or later.”[10]

Alfredo Villatoro was well known as a news coordinator for the radio station HRN. He was kidnapped in May 2012 after receiving threats and was found dead six days later. The assassins responsible were apprehended early in 2014, but the intellectual authors remain unknown. In addition, an aggravating factor is that no investigation has been carried out to find the motif for his killing.[11]

Among the recent victims, it is possible to find journalists who supported the coup as well. Joseph Hernández Ochoa, an entertainment journalist, was driving with a friend, Karol Cabrera, a reporter at Channel 8. Ochoa was fatally shot, but Cabrera believes she was the real target, since she had previously received phone threats due to her support of the coup that ousted Manuel Zelaya. In addition, Cabrera’s daughter was attacked in a similar fashion by criminals believed to support Zelaya.[12] This case illustrates the bifurcation of politics in Honduras and that attacks are carried against everyone on the ideological spectrum.

These are only three cases out of the 38 journalists who have been murdered since 2003. In Honduras, the media plays an essential role in the diffusion of information. In many cases, there are attempts to silence smaller news outlets due to the nature of information they distribute. For example, 36 members of the Council of Indigenous and Popular Organizations of Honduras (COPINH) have been accused of sedition for allowing the residents of San Francisco de Opalaca to object the election of the new mayor.[13]In fact, minorities often face obstacles that prevent them from voicing their concerns.  Smaller outlets definitely face numerous challenges because they are more likely to cover anti-corruption and human rights issues.

An analytic approach to the freedom of expression

John Stuart Mill once wrote that if someone’s opinion is silenced, then humanity is robbed of an opportunity to disseminate truth. Mill considered open discussion a necessary element for the functioning of democracy. He claimed, “the only way in which a human being can make some approach to knowing the whole of a subject, is by hearing what can be said about it by persons of every variety of opinion, and studying all modes in which it can be looked at by every character of mind.”[14] The media’s role is to relay different points of view in order to facilitate a dialogue. However, those denied access to the marketplace of ideas when open discussion already has so many obstacles, indicates the importance of an open society.  John Dewey holds a similar belief and affirms that good citizens enrich each other by deeming everyone as equals. That does not entail uniformity amongst citizens, but an acceptance that every person is unique. Citizens communicate with each other to express their interests and beliefs, and the most well-rounded people are those who are able to listen to the opinion of others. However, some journalists succumb to self-censorship when they fear that their opinions will invite an upheaval or retaliation, and therefore stick to favoring the status quo.

The Honduran landscape presents a series of obstacles when it comes to communicating information. On one side of the debate, people believe that journalists are targeted because they make false claims. However, the Constitution states that every citizen is entitled to the freedom of expression and evidence shows that certain media workers were attacked for this very reason. Consequently, freedom of expression allows for the creation of an open dialogue and a society where its citizens are encouraged to discuss distinct points of view. The professional goal of journalists is to investigate and report their findings. However, in Honduras investigative journalism is declining due to fear and the corrosion of fundamental freedoms. In fact, studies reveal that in many cases victims were attacked before finding compromising information, but were targeted simply for investigating.[15] The obstacles faced by reporters reflect the lack of open discussion in a country that has a long way ahead to defend human rights.

In memory of the deceased journalists/reporters, media workers, and the families who have been afflicted.