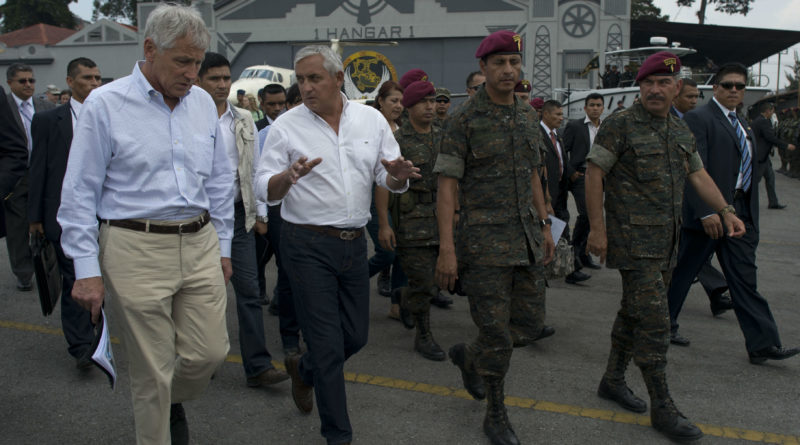 By: Eliza Davis, Research Associate at the Council on Hemispheric Affairs

Protests in Guatemala demanding the resignation of President Otto Pérez Molina have continued due to accusations against him for corruption and human rights violations. In response to the demonstrations, Guatemala’s Supreme Court demanded an investigation of the president on June 10. Two days later, its congress appointed five of its members to explore the allegations against Pérez Molina and decide whether to strip him of his prosecutorial immunity.[1] Recent events have caused some politicians and top officials, most notably Vice President Roxana Baldetti, decisions’ to switch parties or resign, but the scandal has not affected Guatemala’s relationship with the United States. The Obama Administration has upheld its pattern of “see no evil” in continuing the process of granting $1 billion USD in aid to Guatemala, raising the question of the U.S. commitment to fighting corruption and human rights violations.[2]

Before he became president in 2012, Pérez Molina was a general in the Guatemalan Army, where he had a “long and varied career,” most of which was during the Guatemalan Civil War, which spanned from 1960 to 1996.[3] During Pérez Molina’s stint as the head of the Intelligence Directorate from 1992 to 1993, the army captured a Guatemalan rebel commander named Efraín Bámaca Velásquez. [4] Bámaca later disappeared. According to the Guatemalan Human Rights Commission, the military claims that Bámaca committed suicide, but others, like his widow, U.S. lawyer Jennifer Harbury, claim that he was tortured and killed by the military. In 2011 she filed a case against Pérez Molina for facilitating the torture and disappearance of her husband, and even though the Inter-American Court of Human Rights has demanded that the case be reinvestigated, the Supreme Court has not complied.

A book by Francisco Goldman, The Art of Political Murder: Who Killed the Bishop?, alleges that Pérez Molina was also involved in the death of human rights defender Bishop Juan José Gerardi Conendera in 1998. Four days before he was beaten to death in a garage, Gerardi had released a four-volume report identifying the names of 53,000 civilians who had been killed during Guatemala’s Civil War and, further, found the army, not the guerrilla organizations, responsible for 80 percent of these death.[5] This information would have linked then General Pérez Molina to many of those crimes, so the thought that Pérez Molina was involved in Gerardi’s murder is not so far fetched. The Guatemalan government has yet to investigate these claims nor is there any indication that they will.

Since Pérez Molina became president, critics have linked him to other corruption schemes. In May 2013, former dictator Efraín Ríos Montt was convicted for crimes against humanity for killing 5.5 percent of the Mayan Ixil population during his 17 months in office. Evidence shows that Pérez Molina could have been involved in these atrocities as well.[6] The International Commission on Impunity (CICIG) has implicated him in schemes that tap money from public healthcare programs that are already pressed for resources.[7] Corruption charges involved a $14.5 billion USD contract for pharmaceutical supplies granted by the Guatemalan Social Security Institute.[8] CICIG has further linked him to a scheme called “The Line,” which has involved many government officials, including the recently resigned Vice President Baldetti in a scheme to siphon off tax dollars during the process of importing and exporting goods.

The most recent narrative of corruption allegations regarding “The Line” is a little too familiar. On June 11, Congressman Amílcar de Jesús Pop Ac stated his belief that Pérez Molina should be investigated and prosecuted. Since then, Pop has been subjected to death threats.[9] If it is true that Pérez Molina was involved in the death of Bishop Gerardi, the pattern of eliminating those who have had information that threatens to expose Pérez Molina could be repeating itself.

An investigation of Pérez Molina would be at best a long time in coming. Any one of the allegations made against him should have been enough to prosecute him, but political power has provided him sanctuary for his entire career. Even though information revealed by Bishop Gerardi and the court proceedings against Montt have proven that the military is corrupt and has been involved in numerous human rights violations, Pérez Molina has done little to curb their involvement in the country and has even increased their power, with him relying on them to enforce his policies, according to the Human Rights Watch.[10] Guatemala needs to recognize that keeping people like Pérez Molina in power will only exacerbate and prolong the problem of corruption and human rights violations. Even though publicity and citizen involvement in the issue has come out of the most recent scandals, more should be done.

While the people have begun to rally against the government, it is criticism that major powers like the U.S. government make that will ultimately solve the problem of Guatemalan corruption. In the wake of all of the protests, the Obama Administration needs to consider the implications of sending money to Pérez Molina’s government. By completing the $1 billion USD aid deal, the U.S. government would be supporting Pérez Molina’s corrupt administration and the endless stream of human rights violations that have occurred in Guatemala. If Obama wants to denounce these abuses and corruption, he must take a stand against leaders like Pérez Molina and refuse to endorse the corruption plaguing their governments.

By: Eliza Davis, Research Associate at the Council on Hemispheric Affairs