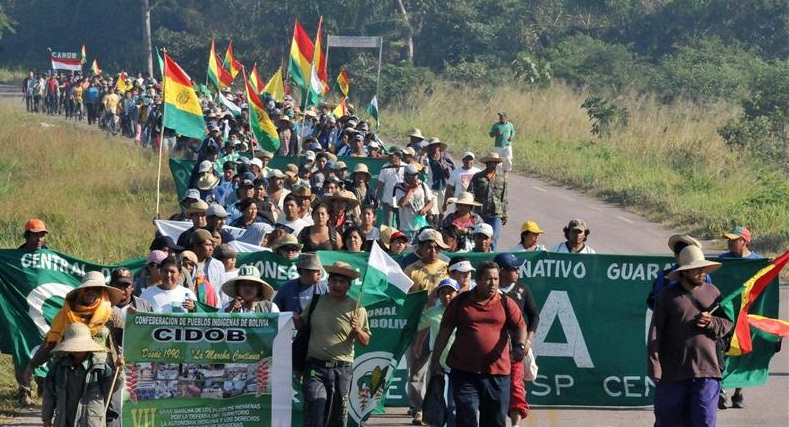 On Monday, September 26, Bolivian President Evo Morales ordered a halt to the construction of a major new highway that would run through Isiboro Sécure National Park and Indigenous Territory (Parque Nacional y Territorio Indígena y Parque Nacional Isiboro Secure, TIPNIS), a nature preserve in which isolated indigenous peoples reside. Native rights groups have repeatedly blocked progress on the new conduit by conducting a march of over three hundred miles from the Amazon to La Paz, one of Bolivia’s capital cities. Once complete, the highway would form part of the economic corridor between the Pacific coastline and Brazil, and represent an instance of the development of complex infrastructure in the largely poor, indigenous nation of Bolivia. As the result of rising levels of protest, Morales agreed to suspend construction until a “national debate” took place, at the end of which a referendum on the highway would be held in the two provinces that it would connect.

The recent uprisings in response to the construction of the highway have revealed profound disagreements among Morales’ supporters; Defense Minister Cecilia Chacon resigned over the government’s attempts to break up the march by force. While many indigenous people oppose the construction, some farmers and coca growers support the highway and its potential to increase commercial activity in the poor nation. All three of these groups, however, are key parts of Morales’ political base. The conflict exposes the stark contradictions that leftist governments face in an increasingly globalized world, as demands from social groups clash with the needs of a market economy. The unusually widespread media coverage of the protest, including reports of allegedly excessive use of force by police, highlights the tendency of the press to criticize progressive states such as Bolivia while ignoring important social movements elsewhere in the world. Nonetheless, Morales would be wise to respond to his base, redress Bolivia’s long history of ignoring the indigenous, and balance pressing concerns of social justice with economic ones.