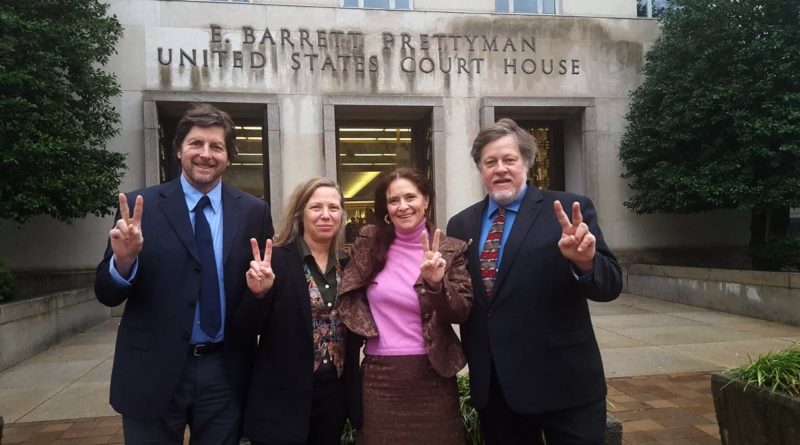 The case against the four activists that protected the Venezuelan Embassy between April 10 and May 16 of 2019, was declared a mistrial this Friday February 14 by federal judge Beryl Howell, despite all her restrictions on the types of evidence that could be presented by the defense. The prosecutors for the Trump government were not able to convince the jury that retired nurse practitioner David Paul, lawyer Kevin Zeese, pediatrician Margaret Flowers and academic Dr. Adrienne Pine, broke any law during their stay at the Venezuelan Embassy while protecting it by request of the legitimate Venezuelan government of Nicolás Maduro.

The prosecutors, representing the government of Donald Trump, tried unsuccessfully to convict the defendants with knowingly and willfully obstructing, resisting and interfering with a federal law enforcement agent engaged in the performance of protective functions authorized under section 37 of the State Department Basic Authorities Act of 1956 [1]. In a short 4-day trial at the E. Barrett Prettyman Courthouse, handicapped by restrictions regarding the information that could be shared in court, the defense team (lawyers Michael Satin, John Zwerling, Heather Shaner, and Bill Welch), presented to the jury all the inconsistencies of the case, including the ambiguity of enforcement actions taken by Department of State agents, the secret service, and DC police officers during the siege of the embassy by right wing opposition protesters. The case also showed the lack of legal clarity regarding the legitimacy of Trump declaring the Venezuelan congressman Juan Guaidó as interim-president of Venezuela with diplomatic authority.

Restrictions to the defense

Judge Howell, since day one, created several barriers for the defense to inform the jury of all facts. She did not allow any clarification on the legality of the presence of the four defenders inside the Embassy of Venezuela who were authorized by the Venezuelan Government to protect the premises. The jury could not be informed that, despite the political opposition of the US Government, Maduro’s Presidency is recognized by the United Nations and almost 150 countries as the legitimate Executive authority of the country. The jury also could not see a video where Venezuelan Ambassador to the UN, Samuel Moncada, formalized the authorization for the defenders to protect the embassy located in the heart of Washington DC, in the Georgetown neighborhood.

During the siege against the Venezuelan Embassy, all security forces around the perimeter of the building allowed opponents of President Nicolás Maduro to exercise violence against the defenders and their fellow activists, to vandalize the building, and to physically attack and sexually harass journalists and pedestrians. No arrests took place among all the attackers to the building and people. Historic civil rights leader Jesse Jackson and his assistants also had to endure violence and the inaction of the security forces while delivering food and water for the defenders.

Restrictions on the defense caused confusion for the jury

Most of the evidence and the political context to clearly show the illegitimacy of the charges against the four defenders was kept out of reach from the jury. However, Judge Howell, contradicting her own ruling, allowed the government’s prosecutors to freely develop their political narrative, making the jury believe that Juan Guaidó was the legitimate president of Venezuela and Carlos Vecchio his ambassador.

These efforts by Judge Howell backfired. Her restrictions forced the court, prosecutors, and the jury to deal with facts obscured by complex technicalities that, on their own merit, showed all the contradictions, mismanagement, and lack of clarity exercised by the security forces during several weeks of siege against the Venezuelan Embassy.

The main points of the defense were the ambiguity and confusion of the trespassing orders delivered by the security forces; the complete lack of resistance of the defenders who never interfered with the work of the DC police or federal agents; and the defenders’ conviction they were acting legitimately since the Government of Venezuela had authorized them to protect the building. In discussions with the prosecutors and defense attorneys after the mistrial, several jury members took issue with the opaqueness of the trial.

The trial, which took place on Constitution Ave, just steps away from Capitol Hill, has deep implications for the role of the judicial branch, DC and federal security forces, and the way the US respects or breaks international law.

Judge Howell’s restrictions on the defense appeared designed to strengthen the Government’s case, and made both the court and the security forces involved in the Embassy’s siege political instruments of the Executive. By not allowing the jury to understand international law and the Vienna Convention of 1961 on Diplomatic Relations [2], and the political context of the relationship between Maduro’s government and Guaidó’s shadow government as an instrument of US foreign policy, Judge Howell broke the impartial rule of the US judicial system by limiting arguments to the presuppositions of the Government’s political thesis.

The mistrial decision is also a serious setback to the Trump Administration, that could have consequences for the future of similar illegal actions of the government, when it comes to serious violations of  the Vienna Convention and, in particular, the obligation to protect diplomatic missions. US federal law, in the case of the seizure of the Venezuelan Embassy was invoked to flagrantly break international agreements by giving the Executive branch the power to strip away buildings and immunities from legitimate diplomatic representatives.

During the deliberation period,the jury showed clear signs of confusion regarding the Government’s argument. On Friday, the jury sent four notes to the judge: first they asked about whether the defendants had to have knowledge about the statute of which they were in alleged violation in order to be found culpable of a crime; second, they asked to review the testimony of the officer who interacted with the defenders; and third, they advised the judge that they had made no progress all day and were deadlocked. For note one, the jury was instructed that knowledge of the specific statute was not necessary, only that the defendants had knowledge that they were in violation of a law and intended to violate the law. The judge also ruled that the beliefs of the defendants were not relevant. In response to the second note, the judge ruled that the jury must deliberate based on their recollection of the testimony. And in response to the third note, the judge ordered that deliberations continue. The final note was a declaration by the jury that they were deadlocked with no foreseeable progress, after which a mistrial was declared by the judge.

The judge, prosecution and defense attorneys agree that a status hearing would be held on February 28  at which time the Government will decide whether to drop the charges or ask for a new trial. The defense team is ready to appeal in case a new trial rules against them, including taking the case before the Supreme Court.

Fred Mills contributed as editor of this article

[2] In fact, the Vienna Convention in several articles, including articles 30 and 45, ensures the protection of diplomatic missions, especially if diplomatic relations are broken. See official document for details: https://treaties.un.org/doc/Treaties/1964/06/19640624%2002-10%20AM/Ch_III_3p.pdf