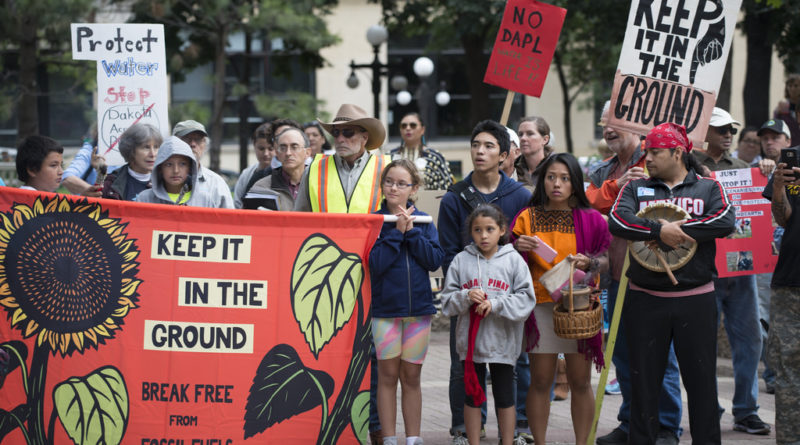 The ongoing protests against the continued development of the Dakota Access Pipeline (DAPL) by Indigenous peoples, environmentalists, and human rights activists exposes the reckless disregard for constituent voices by the fossil fuel industry and its leverage on the government. The Council on Hemispheric Affairs (COHA) has taken a clear stand of defending constituent rights against the exploitation of natural resources by mining and fossil fuel interests without the consent of those most impacted by such industry. We are now witnessing a similar imposition of corporate interests over constituent rights in this country when it comes to condemning similar controversies in Honduras, El Salvador, Guatemala, and other places in the Global South.

For the DAPL, a crucial section of the pipeline passes through reservation land belonging to the Standing Rock Sioux Tribe in Cannon Ball, North Dakota.  Proponents of the pipeline’s construction argue that the project is important for economic development while opponents have cited both the anticipated adverse environmental impact and Indigenous peoples’ sovereignty as principal reasons to halt any further construction.

Geographically, the DAPL originates from the Bakken region near the reservation, a location estimated to hold 7.4 billion barrels of recoverable oil and 6.7 trillion cubic feet of recoverable natural gas.[i] Economically, proponents of the DAPL have touted that construction of the project will create between eight and twelve thousand construction jobs of which, following completion, 40 ongoing operational jobs will be established. This claim that has resulted in endorsements from a number of labor unions despite evidence suggesting that the employment numbers have been slightly exaggerated.[ii];[iii];[iv]

However, despite the lustrous economic development argument, no amount of revenue or employment numbers can overshadow the damage the DAPL will do to both the culture and life of the Standing Rock Sioux Tribe. First and foremost, although oil pipeline transportation is relatively safer than the use of traditional railroads, the risk of an oil spill from a ruptured pipeline cannot be overlooked.[v] For members of Standing Rock Sioux, part of the DAPL will pass directly under Lake Missouri, an important source for both the drinking water and food supply for the 8,000 inhabitants living on the reservation.[vi] Should there be even the slightest rupture or spill, the health of the entire Tribe could be severely jeopardized.

Worst of all, the treatment and backlash towards the peaceful protestors illustrates the general attitude of the federal government and police towards the grievances of Native American tribes. In the last month specifically, arrests of those at the development site has escalated, with as many as 21 detained in a single day by police equipped with riot gear.[vii] Moreover, mistrust has worsened as Amy Goodman, host of the popular online media forum Democracy Now!, was recently charged with trespassing on private property (a misdemeanor), raising concerns over intimidation of the press and First Amendment rights.[viii] Equally troubling, though, is local law enforcement’s decision to utilize dogs and tear gas as a method of repression, a tactic with historic roots in the misuse of force by state actors during civil rights movements.[ix] Collectively, these abusive and repressive tactics represent the asymmetrical nature of the power distribution surrounding the protests.

Given the severity of the environmental and cultural concerns, the DAPL protestors has seen the solidarity of environmentalists, human rights groups and various Native American tribes.[x] The DAPL is another example of the violations of Native American tribal sovereignty in a deeply rooted history of marginalization and oppression of the Indigenous peoples of North America.[xi] In regards to the DAPL, however,  the Standing Rock Sioux Tribe—along with allied Native American tribes—is taking an unprecedented modern-day stand against continued exploitation and repression.

With the help of legal defense from Earthjustice, a non-profit environmental law organization, the Standing Rock Sioux Tribe has filed litigation against the U.S. Army Corps of Engineers at the Court of Appeals in the D.C. Circuit, citing a failure and violation of the legally required consultation between the Corps and the Tribe.[xii] As a result of domestic and international pressure, the Standing Rock Sioux Tribe secured a major victory in the ongoing battle. In early September, the Department of Justice intervened with an injunction, temporarily halting any further construction on reservation land in anticipation of a court ruling.[xiii] Regardless of the outcome, one thing is certain: the Standing Rock Sioux Tribe has demonstrated their resilience in resisting continued trivialization of their land, culture, and sovereignty.