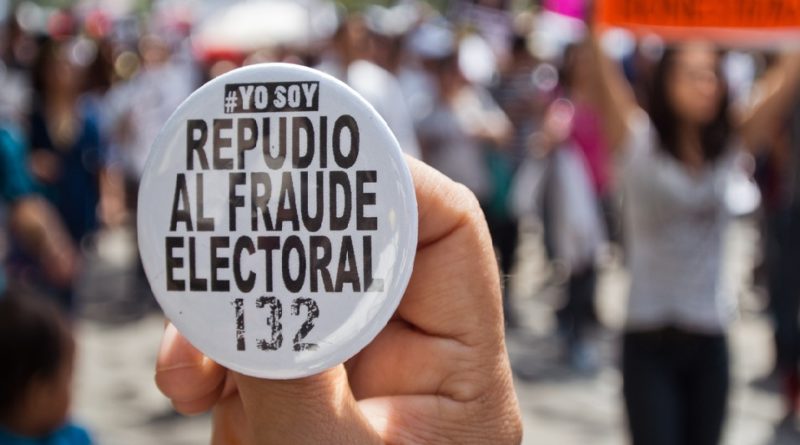 By Alexia Rauen, Research Associate, and Clément Doleac, Research Fellow at the Council on Hemispheric Affairs

On May 31, 2017, COHA reported on the likely outcome of Mexico’s gubernatorial election and its implications for the 2018 Presidential race. On Sunday, June 4, 2017, voters in the State of Mexico, which is Mexico’s most populous state, took to the polls to choose their next governor. Western media sources, such as Reuters and The New York Times, indicated victory for the Institutional Revolutionary Party (Partido Revolucionario Institucional, PRI), even before the state’s official electoral institution declared any winner.[i][ii] It appeared, several days after the election, that the PRI candidate held 33.71 percent of the vote, while the National Regeneration Movement (Movimiento Regeneración Nacional), or MORENA, candidate, Delfina Gómez, captured 30.81 percent.[iii] MORENA’s leader, Andrés Manuel López Obrador, firm in his belief that Gómez is the actual winner, has demanded a recount, citing election fraud. For López Obrador, this must be a painful reminder of the recount he lost in the 2012 presidential election to current president Enrique Peña Nieto.

Even while the early results were being tabulated, the international markets had already reacted to news accounts of a PRI win. Mexico’s peso strengthened after the PRI declared victory, which demonstrated the support of the international business community for the PRI to retain power.[iv] The peso previously had been weaker, according to several observers, because the international markets considered a MORENA win plausible.[v] There is an apparent wariness of economic changes related to a MORENA win, as the MORENA party desires a shift away from neoliberalism, free trade agreements, and rollbacks to privatization that have been implemented by the PRI, such as within Pemex and the oil sector. While this change may harm exploitative big business interests, as COHA reported back in 2015, turning away from neoliberalism will likely benefit the average Mexican consumer.

Moreover, there is no consensus in Mexico over the gubernatorial elections as many believe these elections to be fraudulent. This is not atypical of Mexican elections. Freedom House, a right-wing U.S.-based NGO, finds Mexico to be only “partly free” in their annual Freedom Report, which combines qualitative analysis of political rights and civil liberties.[vi] The NGO points to corruption within the government, questionable elections, and “a climate of impunity” as factors that negatively impact political freedom in Mexico.[vii]

There are verified instances which should be of particular concern. For example, Juan Carlos Villareal Martínez, a prior advisor to the Electoral Institute of the State of Mexico (Instituto Electoral del Estado de México, IEEM) who assists in the release of early results, was shot in the leg by a group of individuals posing as journalists.[viii] It is certainly possible that this was a political attack to prevent Villareal Martínez from reporting on the election. Just before the ballots were cast, severed pig heads and dark crosses were placed in front of MORENA headquarters in Tlanepantla, a neighborhood outside of Mexico City.[ix]  Even worse, a lawyer working for MORENA in the State of Guerrero was killed, allegedly by the police, as reported by the party.[x] In total, MORENA has reported 17 deaths related to the election.[xi]

Article 19, a British NGO, reported in May of 2017 on international demands that the Mexican government should better protect journalists, who have been threatened and murdered under Peña Nieto’s governance.[xii] The current administration has ignored a UN and IACHR proposal to confer on this issue.[xiii] On Article 19 México’s Facebook page, a post made shortly after the June 4 elections alleged that 12 members of the press in the State of México faced intimidation, largely by members of the political parties and government officials.[xiv]

In the absence of international electoral observers, who could have been sent by the UN, the Organization of American States (OAS), the Union of South-American Nations (Unión de Naciones Suramericanas, UNASUR), a group of international citizens traveled to Mexico to observe the elections under the hashtag #NiUnFraudeMas (Not a fraud more), reminiscent of the #NiUnaMas campaign across Latin America calling for an end to femicides.[xv] The group reported numerous instances of perceived vote buying, denials at voting booths of individuals who wished to cast a vote, and threats of violence against MORENA representatives which prevented them from arriving at polling booths.[xvi] Some of these international observers reported being threatened with a gun.[xvii] The Guardian also found reports of vote buying that if true, delegitimize the election results entirely.[xviii]

According to Proceso, a well-known Mexican newspaper, fraud was so prevalent that the newspaper could clearly identify more than ten different ways in which the PRI and the federal government manipulated the results, including the misuse of federal funds for PRI campaigning, different presidential visits with the Catholic church in the State of Mexico, massive purchasing of votes, and the organizing of phone calls to intimidate voters through the use of physical threats.[xix]

The Lack of Credibility of Mexico’s Electoral Institutions

Despite all of this evidence that the election was fraudulent, the State of Mexico Electoral Institue (Instituto Electoral del Estado de Mexico, IEEM) did not approve a full recount of the gubernatorial vote. It did, however, accept the recount of certain polling stations. These recounts, which occurred on June 8th and June 9th, confirmed that the published MORENA tally was lower than accurate, and that the PRI tally had been artificially increased, bringing into question the legitimacy of the election results.[xx][xxi][xxii] However, even after these recounts occurred, the IEEM refused a total recount and declared the PRI candidate victorious. Moreover, the lack of credibility of this state electoral institution is compounded due to the fact that it is the local governor of the PRI that oversees its members and its activities.

This absence of nonpartisan autonomy with regards to the IEEM was clear in the way it handled the preliminary results process. The IEEM decided to publicize the results of the “quick count” which promoted a PRI Del Mazo win by taking a sample of only 1,347 polling stations (polling stations total about 18,000).[xxiii] José Blanco, in his article “Cártel Menguante” of La Jornada, declared that a representative sample should include 1,818 booths (almost 500 more).[xxiv] The IEEM’s count projected Del Mazo’s win prematurely and biased sources to believe his win was certain.

Again according to Proceso, the early results release program (Programa de Resultados Electorales Preliminares, PREP) also altered the results; hundreds of photographs presented inconsistencies with regards to information posted on the polling stations (which have to be displayed at the exterior of the stations for transparency purposes).[xxv] Ricardo Moreno, spokesperson for MORENA, stated that the party will argue the results of at least eight out of the 45 districts, particularly because some votes for MORENA were marked invalid, arguing the votes “illegible.”[xxvi]

Not only the results of the State of Mexico are questionable, but also those of Coahuila, where the PRI surprisingly defeated a PAN-PRD coalition (National Action Party, Partido Acción Nacional, PAN and Democratic Revolution Party, Partido de la Revolución Democrática, PRD). The fraud that has been registered in this state election is comparable to that observed in the State of Mexico.[xxvii]

What is the future for the PRD-PAN coalition?

In another gubernatorial election, in Veracruz, a populous state bordering the gulf, the coalition of PAN-PRD dominated.[xxviii] Preliminary findings in Veracruz indicated that PAN-PRD would govern 103 municipalities, PRI-PVEM (PRI with Mexico’s Green Party) would govern of 38 municipalities, and MORENA would be in charge of 16 municipalities.[xxix] In the State of Mexico, the published count has PAN with 11.27 percent of the vote and PRD with 17.82 percent of the vote.[xxx] This indicates that, should the PAN and the PRD have formed a coalition, as the parties have proposed they will do for the upcoming presidential election, then they may have proved competitive in the gubernatorial elections as part of this coalition (although just slightly under Gómez’s alleged percentage of vote, about 30%).

The results in the State of Mexico are highly disputed. As previously stated, Andrés Manuel López Obrador, presidential candidate and leader of MORENA, posted a video declaring Delfina Gómez the winner, denied the PRI victory, and demanded a careful count of all ballot boxes.[xxxi] Moreover, the high percentage obtained by the MORENA candidate is incredibly significant. For perspective, during the last gubernatorial elections which occurred in 2011, the current governor (who is of the PRI party) won nearly 62 percent of the vote while the PRD coalition amounted to about 21 percent of the vote and the PAN around 12 percent.[xxxii] This indicates that the PRI lost nearly half of its voter base in 6 years. The blatant fraud, the federal intervention, and the violence and deaths that we have witnessed in the State of Mexico, Coahuila and across the country in these elections, are all a demonstration that the PRI realizes it would lose the election under a free electoral system. With such a massive shift in results between elections, the outlook for the presidential elections in 2018 is promising. The PAN and PRD have proposed presenting a candidate in coalition, and MORENA is gaining incredible grounds all over the country; the Mexican electorate might very well relinquish any chance of a PRI win when it comes time to cast a ballot in the presidential election.[xxxiii]

It is very possible that in a truly free electoral system, without vote buying and other fraud, MORENA might have won (and could win in the future). This proves fascinating as the party is not institutionalized like the PRI, and has not been around for even a decade (PRI has had nearly nine decades of existence). Given that MORENA has been able to accumulate this kind of support in such a short time indicates that the Mexican electorate is ready for change, or at least willing to threaten the PRI hegemony for increased accountability.  International actors such as the Community of Latin American and Caribbean States (CELAC), the UNASUR, the OAS and even the UN should take a strong stance against electoral irregularities and be more responsive to concerns over corrupt elections. These organizations should provide and assist with more oversight in Mexico’s upcoming presidential election to ensure the will of the electorate is upheld. If that does not happen, it is quite unclear if it is truly possible to defeat the PRI, as these local elections demonstrate.

According to political scientist Giovanni Sartori, a predominant party system and a hegemonic one differ in that elections are truly competitive in the predominant system, even if one party is able to win the majority of the elections.[xxxiv] In a hegemonic party system, the main political party, through legal and illegal means, ensures it remains the dominant party. Even if the analysis made by Sartori focused on the national level, his study is absolutely relevant for local elections in Mexico. [xxxv] Mexico seems to become once again a hegemonic political system, rather than a predominant (and democratic) one. Fortunately, the Mexican electorate is more politicized than ever, and utilizing the free spaces and margins that this hegemonic system allows. Massive protests have been witnessed in Coahuila and in the State of Mexico, not known for these kinds of practices.[xxxvi] We might very well soon witness a large shift in the traditional domination of the PRI, when the electorate demands an end to the hegemonic party system.[xxxvii][xxxviii]

By Alexia Rauen, Research Associate, and Clément Doleac, Research Fellow at the Council on Hemispheric Affairs

[xii]  “Mexico: International Organizations for Freedom of Expression Urge President to Receive Rapporteurs from UN and IACHR,” Article 19, May 29, 2017,  https://www.article19.org/resources.php/resource/38764/en/mexico:-international-organizations-for-freedom-of-expression-urge-president-to-receive-rapporteurs-from-un-and-iachr.