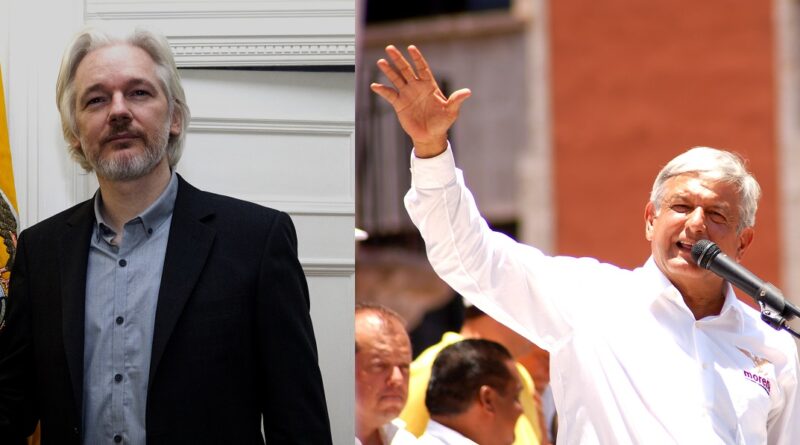 On Monday January 4 a British court denied a U.S. request to extradite world renowned journalist and Wikileaks founder, Julian Assange, to face charges in the U.S. under the Espionage Act. Shortly after this breaking news, President of Mexico, Andrés Manuel López Obrador (AMLO), urged the U.K. to consider the possibility of freeing Assange and announced that Mexico “offers political asylum” to the activist.

This bold announcement by López Obrador draws a stark contrast to the revocation of asylum by the President of Ecuador, Lenin Moreno, who turned Assange over to British authorities in April 2019 after the journalist had spent seven years inside the Ecuadorian embassy in London. To provide political cover for this controversial act, part of the mainstream press deployed character assassination, painting an image of an erratic Assange, ungrateful for Ecuadorian hospitality. Numerous human rights and civil liberty organizations, however, denounced the decision of the Moreno administration to violate Assange’s diplomatic protection and allow the police to penetrate the Embassy building and arrest the journalist. The sudden reversal of Ecuador’s provision of asylum and protection was consistent, however, with Moreno’s dramatic pivot to the right after he was elected on a leftist platform. It was viewed by his critics as an act of subordination of Ecuador’s foreign policy to the imperatives of Washington.

The struggle to free Assange is far from over. Since Judge Vanessa Baraitser employed the humanitarian argument that extradition to the U.S. could lead Assange to attempt suicide, instead of using the substantive arguments advanced by Assange’s legal team, the door remains wide open to a United States appeal which could drag out litigation for months or even years. Assange’s lawyers argued that he was acting as a journalist when he published leaked documents about U.S. military operations in Afghanistan and Iraq, and that these disclosures are protected by the First Amendment.

The international campaign to free Assange anticipates a continuing legal fight. Many of Assange’s supporters are petitioning President Donald Trump to pardon him, and failing that, will urge the incoming Biden administration not to pursue an appeal of the U.K.’s denial of extradition.

A history of protection of the persecuted

The Mexican gesture came as a surprise to many observers, but it was not out of character, as Mexico has a proud tradition of granting or offering asylum or protection to the persecuted including Víctor Raúl Haya de la Torre, José Martí, Leon Trotsky, Pablo Neruda, León Felipe, Héctor José Campora, Rigoberta Menchú, Enrique Dussel, and most recently former president of Bolivia Evo Morales. Mexico also granted asylum to Mohammad Reza Palhevi (the Shah of Iran).

By offering asylum to Evo Morales after an Organization of American States (OAS) backed coup in November 2019, López Obrador placed Mexico on the side of popular sovereignty in the Americas against the Lima Group’s complicity with the drive to bring about regime change in Nicaragua, Venezuela, and Cuba, in addition to Bolivia.  And by offering Assange asylum López Obrador adds political clout to the growing international outrage at the detention and psychological torture of Assange. AMLO has also put Mexico on the world stage and has conferred legitimacy on the actions of Assange and Wikileaks, that revealed to the world numerous illegal activities perpetrated by the U.S., including war crimes, clandestine operations and meddling in the internal political affairs of dozens of countries, foes and allies alike. Offering asylum to Assange shows respect, from the heart of the Americas, for human rights, international law, sovereign equality of nations, political independence, and multilateralism.

AMLO and his political project, also named in Wikileaks

Although López Obrador formalized his offer of political asylum at the beginning of 2021, he had already expressed his sympathy and support for the journalist as early as January 2020: “I wish that he be forgiven and released. I do not know if he has recognized that he acted against the rules and against a political system, but at the time these cables showed how the world system works in its authoritarian nature, they are like state secrets that were known thanks to this investigation and to the release of these cables. Hopefully he will receive the consideration he deserves and be freed and tortured no more.”[1]

The Mexican president also revealed how the cables released by Wikileaks covered the work of his political movement. “Here are cables that were released when we were in the opposition that spoke of our struggle and I can prove that they are true.” He added that “what is expressed here, reflects the reality at that time, of illegal relationships, of illegal actions, illegitimate violations of sovereignty, contrary to democracy, to freedoms.” That is why, López Obrador pointed out, “I express my solidarity, my wish that he be forgiven” because “if he offers an apology and he is released, it will be a very just cause in favor of the human rights of the world. It is an act of humility from the authority that has to decide on the freedom of this researcher.”[2]

Safety of journalists still a challenge in Mexico

The announcement made by López Obrador regarding journalist Julian Assange unleashed a series of reactions regarding freedom of expression and contradictory policies of the current Mexican administration.

On one hand the president has indicated that  his administration backs freedom of the press: “out of conviction, we never, ever, would limit freedom of expression. None of the freedoms.” He also said that “it fills me with pride that freedom of expression is guaranteed. This hadn’t happened in a long time. The media, the press, were either sold or rented to the regime. This is new, something to celebrate.”[3]

However, the opposition, human rights advocates and concerned journalists  highlight that there is still a pending debt with reporters in Mexico, because during the first two years of AMLO as president, 17 journalists have been assassinated according to the organization Article 19[4]. The Mexican government recognizes even a higher number:  the Ministry of the Interior has announced that 38 communicators have been murdered from December 2018 to December 2020[5]. This indicates that there are high levels of impunity in this type of crime, since currently only two cases have resulted in convictions, 23 cases remain under investigation, and 13 are in litigation. It should be noted that the violence against journalists didn’t begin with AMLO’s administration. During the term of Enrique Peña Nieto, 47 journalists were assassinated, while under Felipe Calderón, 48, making Mexico one of the most dangerous countries to practice journalism.[6]

Mexico’s offer of asylum to Julian Assange bolsters the cause of Latin American independence by countering the subordination of the OAS, and in particular the Lima Group, to U.S. foriegn policy and exposing the underside of Washington’s interference in the internal affairs of other nations. It also promotes the values of humanitarian protection against political persecution from Latin America to the planetary stage.  It  advances the case of those advocating more transparency and the right to information from their governments at a time when there is mass surveillance of citizens. López Obrador recognizes that democracy can only flourish when governments are accountable to an informed citizenry. He has done us all a service.

All translations into English from Spanish language sources are by the authors.