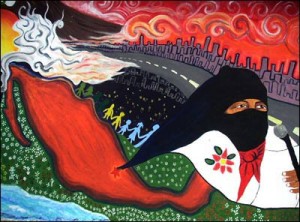 The current state of insurgency engulfing Mexico from north to south has strongly resonated in the state of Chiapas. International human rights and Zapatista (Ejercito Zapatista de Liberación Nacional, EZLN) activists involved in promoting women’s rights have often been targeted and brutally abused by paramilitary groups as well as by the Mexican military. The beatings and brutalities these activists face represent a new stage of psychological warfare against the Zapatista movement, and particularly its female constituency. Women are targeted in and around churches, in the fields where they work, and in the markets, limiting their freedom of movement and independence. Almost all spaces they frequent have become intrinsically dangerous. “They [soldiers] scare us, they threaten us and we women can’t walk alone if they are around,” comments a young female on the situation in Lacandon Jungle.

The pace with which violence has spread throughout Chiapas and neighboring states is often directly associated with the Zapatista movement and its growing number of female followers. Marina Pages, coordinator of the Servicio Internacional para la Paz (SIPAZ) wrote in a letter to the SIPAZ members, “Between September 2009 and October 2010, 37 human rights defenders were terrorized, beaten, and arbitrarily detained, seven have disappeared and five died while in the hands of authorities or organized crime.” While the majority of victims are predominantly Zapatista women, the growing number of foreign female targets alarms observers and attracts increasing international attention. In April 2010, Bety Cariño, director of the Center for Communal Support Working Together, and the Finnish human rights observer, Jyri Jaakkola, were killed in an attack while traveling to San Juan Copala, Oaxaca. This occurrence is one of many in which foreign and mestiza female activists are threatened with death, brutally attacked, or gang-raped.

The escalation in violent crimes against women has been especially notable since the January 2006 death of Ramona, an indigenous Maya comandante and women’s rights activist. Ramona spent a long time travelling around southern Mexico asking women about their living conditions and social status. Her work resulted in the Revolutionary Women´s Law, which was passed in the Zapatista Territory in 1993 by the EZLN. The document lists ten basic rights guaranteeing social and political freedoms to Mayan women. These rights include the right to receive an education, to work and receive a just salary, and the right to choose whom to marry. “Before we didn’t have any rights; before we were not valued as women,” says a woman from the Zapatista movement. Two other women speak of the changes brought to their communities: “In our zone before the Zapatista struggle things were different. We had no right to decide who we married. And when we married we were mistreated, beaten and humiliated by our husbands, and more when they were drunk.”  The creation and promotion of the Law were necessary steps for the EZLN movement to discontinue oppressive societal practices against women and set off irreversible changes in the Zapatista and other Mexican communities.

With the explicit intention of demoralizing the indigenous spirit and withdrawing women’s rights, paramilitary organizations purposely target women even slightly associated with the Zapatista movement. Responsible for social reproduction, Mayan women hold indigenous communities together, which intimidates and impedes perpetrators. Today, these women continue to preserve their ancient traditions and history, while exercising the new rights introduced in the Revolutionary Law. The crimes committed against women by the military and close-minded community members are nothing but pitiful attempts to stifle the movement into submission. As Soneile Hymn points out, “Rape has been on the rise since the uprising, as a military tactic of terrorism in indigenous villages.” As in any other type of warfare, dehumanizing and violating victims, particularly women, serves as a means to discourage and weaken the cause and its ideals. Dishonored in the eyes of their offenders, these women are expected to discontinue their fight and revert to the passivity of the pre-Revolutionary Law days when similarly horrific beatings and rape were common. Unlike the dominant misogynistic mentality of the previous era, today’s younger generation of Mayan women know their rights well and are unwilling to relinquish them. The Revolutionary Law has raised a new generation of Mayan luchadoras who say ¡Basta! to the violence employed by  their oppressors. No longer do women have to put up with sexual assault from their patrons or beatings from drunken spouses. Today, Maya women are beginning to embrace their rights guaranteed in the Revolutionary Law, including the right to resist physical abuse and the right to participate in the revolutionary movement.  The sporadic violence aimed at the human rights and female EZLN activists is but a pathetic attempt by scared and desperate perpetrators to silence the women and delay the simmering changes now taking place in Mayan communities.