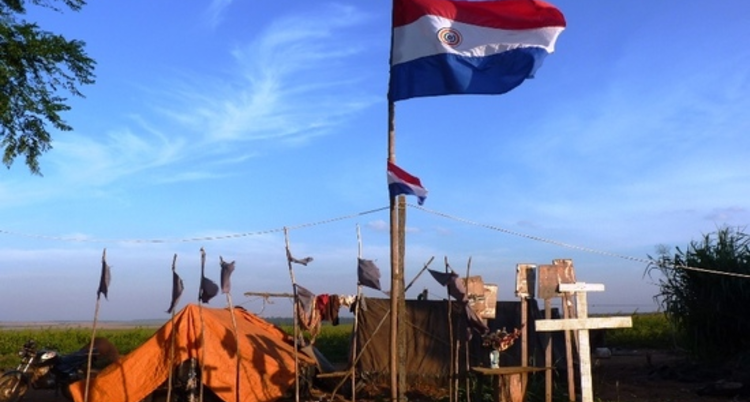 On June 15, 2012, more than 300 police officers in riot gear received government orders to remove 60 landless campesinos from Marina Kue, a piece of state-owned land located in Curuguaty, Paraguay. The operation to remove the farmers escalated into a shoving match, which ultimately, appears to have involved an exchange of gunfire. Eleven landless campesinos and six police officers lost their lives, and many more suffered serious injuries. Fourteen farmers were arrested and charged with murder; some were charged with killing their own family members.[1] Two years later the events at Marina Kue remain uninvestigated. The criminal justice system’s debacle has prompted a wave of domestic and international resentment.

The conflict began when the family of the late Blas N. Riquelme, a prosperous businessman and successful politician, claimed property rights over the Marina Kue territory in Curuguaty. The Riquelme family, owners of the Campos Morombí Company, a private environmental reserve company, asserted dominion over the terrain by filing a request for the eviction of the sharecroppers who had tended it for roughly a month.[2] The request of eviction was made on the grounds of “an invasion of private property”.[3] Nevertheless, there is little evidence to support that the kind of military-like force used by the police to remove the campesinos from the land was absolutely necessary.

After the bloodletting, the farmers who were arrested and charged with murder initiated a hunger strike and demanded that all pregnant women detained in prison be transferred to house arrest. Additionally, they demanded that Judge José Dolores Benitez and Public Attorney Jalil Rachid be removed from the case due to a “breach of public duties and manifest partiality.”[4]

Then on February 14, 2014, the five peasants who remained imprisoned resumed their hunger strike, protesting for an additional 58 days, denouncing the inequality of the adjudication process and exploitation while detained.[5] In solidarity with the prisoners, various Latin American figures have shown their unanimity towards the victims of the massacre. Colombian activist Piedad Córdoba and Argentine Nobel Peace Prize recipient Adolfo Pérez have written letters or support and visited Paraguay.

Prominent among the demands of protestors in Paraguay includes the repeal of the Public-Private Partnership Law (APP), enacted in November 4, 2013. Under the APP, state resources may be transfered directly to private companies.[6] In the case of Marina Kue however, there was ample reason to believe that the Riquelme family had illegally acquired the land. The farmers refused to vacate the farmland until they were presented with evidence of Riquelme’s lawful ownership.

As of May 16, the Institute for Rural Development and Land (INDERT) determined that Marina Kue was a state asset, leaving the “invasion of private property” accusation null and void.[7] In other words, the charges on which the campesinos were originally arrested upon are now cleared. The ruling was a major victory for those displaced from the region.

Unfortunately, landlessness has a long and painful history in Paraguay. The War of the Triple Alliance (1864-1870) led to the collapse of the Paraguayan economy, as well as a loss of almost one-fourth of Paraguayan territory. To pay off its hefty war debt, the Paraguayan government sold large tracts of land to private owners.[8] Then, during the infamous dictatorship of Alfredo Stroessner (1954-1989), approximately 35 million acres of land was distributed illegally to businesspeople, politicians, private companies, and the military—distorting land distribution even further.

Historical misdistribution of land and wealth has resulted in prosperity to an elite few. Modern Paraguay has a stark disparity in land ownership with 85 percent claimed by less than three percent of the population.[9] Additionally, according to a 2007 report by the Paraguayan Committee on Human Rights (Coordinadora de Derechos Humanos Paraguay, CODEHUPY), in the years between 1989 and 2005, 75 farmers were killed and two activists disappeared as a result of attempts at agrarian reform.[10]

Paraguay’s Constitution of 1992, which included provisions meant to promote national development and guarantee farmers’ rights, has failed to be enforced by subsequent administrations. Articles within that legislation mandated a more equitable distribution of land.[11]

President Fernando Lugo was the first politician to be successful in dethroning the Colorado Party—a conservative party that dominated Paraguayan politics for more than six decades.[12] Some observers have suggested that the Marina Kue massacre was orchestrated in an attempt to generate political unrest throughout the country. Following the massacre, in 2012, Paraguay’s then-President Lugo was engulfed in a constitutionally problematic impeachment process before being removed from office. Within months, the new unelected government of Franco fast-tracked the approval of Monsanto genetically modified corn and cotton, a move seen by many as proof of Monsanto’s powerful grip over Paraguay’s domestic affairs.[13] Franco’s approval was done without any kind of preliminary safety studies required by law from Paraguay’s Ministries of Health and Environment.

Although it remains unclear as to how the shooting started, many activist groups cite this incident as an example of the ongoing abuses of human rights. According to the CODEHUPY, authorities have been accused of interfering with the investigation by tampering with evidence, trial delays, omitting autopsies, and resisting cooperation with an independent fact-finding commission. Furthermore, numerous firsthand accounts of the massacre and its aftermath note that wounded peasants were denied medical attention.[14]

What occurred at Marina Kue is a clear manifestation of the unfair land distribution laws and human rights abuses that plague Paraguay. To many, the Marina Kue bloodbath was the byproduct of perpetually empowering the aristocrats at the expense of the impoverished and defenseless. Nevertheless, INDERT’s ruling that Marina Kue was actually state-owned property could prove a crucial first step toward justice, establishing a welcome precedent for future reform.