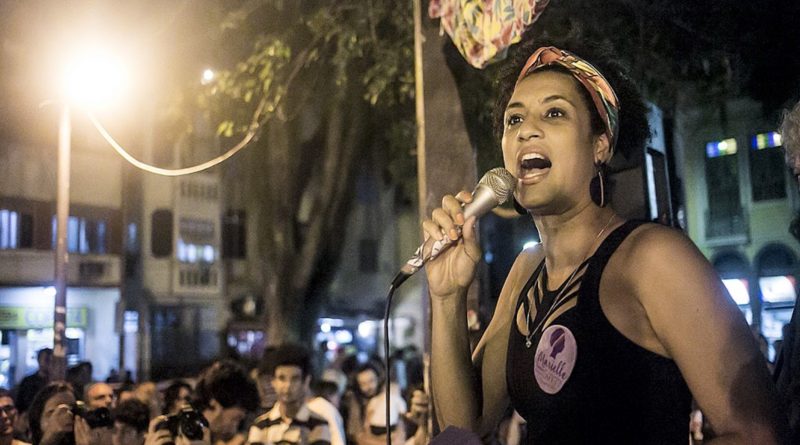 Guest Writter at the Council on Hemispheric Affairs

Over four months have passed since Rio de Janeiro city councilwoman, Marielle Franco, was brutally murdered alongside her driver, Anderson Gomes, and the assailants remain at large. Marielle was a black, socialist LGBT activist who prominently expressed the politics of alterity in Rio. Born and raised in the Maré favela, she was a staunch critic of police violence against the black inhabitants of Rio’s favelas. In a political system where women are rampantly unrepresented, Marielle’s militancy sought to advance the demands of those who are persistently marginalized in Brazil.

Her murder shows that subaltern actors face mounting challenges to advance their causes within a polarized and violent political system. Resolving political disputes in a peaceful democratic context is becoming increasingly difficult in a country where political actors, especially agents of the state, choose to manifest power through violence. Marielle and her allies worked through institutional means to ensure that marginalized people could take advantage of democratic frameworks. However, as the Brazilian state continues to deploy its security forces, to kill indiscriminately in its urban peripheries, violence has become a corrosive political tool, which threatens democratic rule. Marielle’s murder indicates that violence has become the rule —  not the exception —  in Brazilian political life.

On the night of March 14, 2018, Marielle was followed by her assailants for four kilometres across the Estácio neighbourhood after leaving a public debate on racial equality. [i] She was shot in the head four times. Crucially, security cameras around the crime scene were turned off before the crime was committed and the bullets used in the murder were taken from an ammunition stock owned by the federal police. [ii] The circumstances surrounding Marielle’s murder has drawn suspicion that state forces were involved. Days before she was killed, Marielle had been appointed to head an oversight committee that looked into the violence perpetrated by the armed forces in Rio. While investigators have sought to keep their findings confidential, subpoenas issued over the last month indicate that members of the civil police, para-police militias, and Marielle’s political opponents in the city council were involved in her murder. [iii] On July 24, Rio’s Civil Police arrested a former military policeman and a former fireman with ties to a para-police militia who are suspected of having been inside the car that killed Marielle. [iv]

In a country that suffers daily bouts of inane violence, Marielle’s murder was particularly shocking. The assassination of a prominent human rights activist has exacerbated fears that Brazil’s democratic regime is being subsumed by an increasingly violent mode of governance. Marielle’s murder sparked mass protests across Brazil as activists defended her struggles for racial and gender equality, and an end to the war on drugs. Nonetheless, the police’s inability to bring her murderers to justice, over four months after the killings took place, sheds light on the frailties of Brazil’s legal apparatus and its inability to unshackle entrenched forms of impunity.

Marielle’s murder and the persistent failure to find her killers reflect the centrality of violence and impunity in Brazilian daily life. Violence has become normalized, mundane in its recurrence and extraordinary in its lethality. While Marielle’s murder carried indelible political significance, it was registered as one of 636 homicides that took place in Rio during the month of March. [v] Brazil’s rates of violence would be staggering for a war zone, let alone for one of the world’s largest democracies. Crucially, the inability to find Marielle’s killers is a direct consequence of the persisting violence governing daily life in Brazil. The mounting number of cases to investigate, the lack of resources available to law enforcement, and the inescapable ties between criminal operatives and agents of the state hinder the functioning of the judicial system.

While Marielle’s murder remains unresolved, Rio continues to be embroiled in a federal intervention in which the national armed forces have taken over the state’s security apparatus. Utilising a previously unused constitutional clause, which allows the federal government to deploy the national army to resolve emergency situations in any state of the union, President Michel Temer declared a breakdown of public order in Rio in February and took over policing duties in the state until the end of this year. [vi] The armed forces often respond directly to the President, thereby annulling the authority of the democratically-elected Rio Governor Luiz Fernando Pezão, in all security-related matters. Marielle had fiercely criticised the federal intervention as an unnecessary escalation of the ongoing conflicts between state forces, para-police militias, and organized crime groups. So far her criticism has proven true as Temer’s federal intervention has only further increased crime rates in Rio. [vii]

Nonetheless, the presence of thousands of soldiers marching through the streets of Brazil’s third largest state has empowered conservative political actors who advocate for a return to the military dictatorship, which ruled over Brazil from 1964 to 1985. The potential instability and uncertainty, inherent in democratic regimes, is increasingly seen as incompatible with growing demands for “law and order.” However, the popular discourse that bandido bom é bandido morto (a good thief is a dead thief) will only serve to increase the intractability of justice currently being witnessed in Marielle’s murder case. In a mode of governance wherein the state constantly acts violently, public security will remain elusive. Imposing “law and order” by deploying soldiers into the streets will only continue to expose the state to its own contradictions. Despite priding itself on being one of the world’s largest democracies, the Brazilian state is unable to unshackle itself from violent techniques of repression. The police killed over 300 people in the state of Rio alone, between March and May. [viii] In other parts of the country, particularly in the North and Northeast, killings perpetrated by agents of the state are also rising at alarming rates. [ix]

Marielle was starkly aware of the need to challenge the hegemonic discourse that accepts the state’s role in society as that of a violent actor. She sought alternatives to counterinsurgency warfare and advocated for community-based solutions to violence. [x] Marielle’s murder, and the persistent delay in bringing her killers to justice, have exacerbated the tumultuous relationship between democracy, justice, equality and violence in contemporary Brazil. 30 years on from the end of their military dictatorship, democratic norms in Brazil are suffering unprecedented challenges. Violence, perpetrated by a multitude of actors, including state operatives, has become the new normal. The assassination of Marielle and the failure to bring her killers to justice solidifies this new normality. Brazilian democracy lumbers on, but is persistently under threat. Without the likes of Marielle, it will be increasingly difficult to challenge and overcome the new norm.